Dakar, Senegal – On February 1, mass protests swept Senegal in opposition to the perceived attempts of President Wade to engineer a constitutional coup that would allow him a third term in office. The Wade administration has responded by cracking down against protesters across the country. Police have allegedly fired on Senegalese citizens with live ammunition. The number of dead is unknown. In Dakar, a university student and a police officer were killed, and at least ten protesters were seriously injured. In Podor, a violent protest on Saturday left two dead – a high-schooler and a 60-year-old grandmother.

The violent crackdown has left Senegalese society reeling, calling into question their history as a fundamentally democratic and peaceful polity.

Mamadou Diop, the father of the student who was killed, has called on the country’s leaders to step down. “In the name of peace, I am begging Abdoulaye Wade to relinquish power,” he said. “I am not wishing any other parent, any other human being, to go through what I am going through right now.”

The protests are reportedly being led by the Y’en A Marre [French slang for “fed up”] group and M23. Composed of civil society, ordinary citizens and opposition parties, M23 is a social movement that arose from the Green Thursday uprising of June 23, 2011, which protested against a constitutional makeover that would have instituted a vice-presidency (thought to have been created for Wade’s son, Karim) and secured an easy victory for Wade at the 2012 presidential election. The protesters have since taken to the streets on the 23rd of every month, in order to sustain their pressure against a potential constitutional coup.

The calls for President Wade’s departure were in part fuelled by his age, and by doubts about his ability to assume the country’s leadership. Officially 85 years old,  Wade is popularly thought to be at least 90. After a third term, he would thus be around 97 years old. Many also fear that Wade’s secret ploy is to seize power in 2012, but not finish his term, and appoint his son Karim in his place, thus imposing a monarchic devolution of power that the Senegalese electorate rejected during the 2009 legislative elections and again on June 23, 2011.

But Wade has showed no signed of retreat from his resolution to run for a third presidential term. He changed the administrative partitioning of the country to downsize the districts where his party, the PDS, did not have a lead (see here). He allegedly ransacked public coffers to fund his campaign. Most seriously, a series of political intimidations perpetrated against opposition politicians by heavy-muscled youth set the country in a tense mode of violence, escalating with the death of a PDS envoy and the imprisonment [FR] of Wade’s fiercest youth opponent, Barthelemy Diaz, head of the Socialist Party’s Youth League.

However, the “Five Wise Judges” were appointed by the president – and were allegedly each provided with gifts of a limousine and CFA 5 million ($10,000) bonuses from the president. This has cast serious doubts on the impartiality of the court’s decision.

On January 27, the “Five Wise” ruled that Wade could run for president – and excluded the popular singer Youssou N’Dour from the campaign.

The Ministry of the Interior forbade protests at the decision, setting the scene for potential tensions and renewed clashes between national security forces and the mobilised youth.

From 3pm to 6pm, the protest ensued peacefully. At 6pm, however, tanks began to roll against the tight crowd assembled at the Place de l’Obelisque, driving into the crowd, as police officers targeted political opponents – such as Moustapha Niasse, Youssou N’Dour and others.

The violence that ensued has been met with a mix of national mourning and incredulity.

The nation’s religious leaders have parted from civil society by asking the people of Senegal to respect the decision of the Constitutional Court. One notable exception was the leader of the Niassene Leona Muslim Brotherhood, who has called upon the president to relinquish power in the name of peace and stability: “Power is not worth this. It is not worth the death of even one of our sons. You have given us 11 good years. You cannot do anything short of what Senghor or Abdou Diouf have achieved. For the sake of peace, Wade, we beg you to retract yourself” (Walfadjri, Jan 31 2012).

Meanwhile, President Wade, the object of all the tensions – but still the guardian in the exercise of the nation – sits in silence. He has yet to speak on the mass protests and his attempted constitutional coup.

Whether Wade comes to his senses and quells the ongoing violence by withdrawing his candidacy, or whether the electorate decides to return peacefully to their homes and vote en masse on February 26 to oust Wade through the ballot, Senegal’s hard-won peace and democracy of the past 50 years lies in peril.

The hour is grave.

Arame Tall is the Climate Centre’s technical adviser for West and Central Africa. Nimi Hoffmann works for an organisation of rural and small-scale farmers who fight for environmental justice in South Africa. 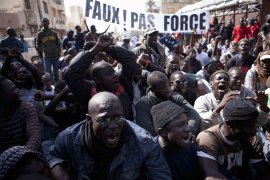 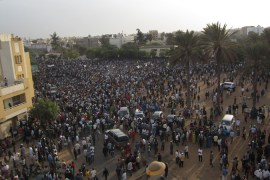 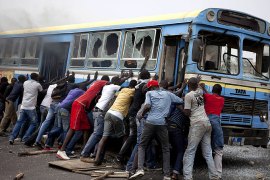 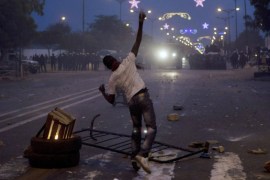 Tension mounts as opposition pledges to press on with its campaign against President’s Wade candidacy for a third term.