Scranton, Pennsylvania – On Thursday, January 26, Efraín Ríos Montt was ordered to appear before a Guatemalan tribunal in order to determine whether enough evidence existed to charge him for the crimes of genocide and crimes against humanity that allegedly occurred during his 17-month rule between 1982 and 1983. Ríos’ day in court was more than ten years in the making, and came about as a consequence of relentless pressure from groups both within and outside Guatemala. Ríos Montt had enjoyed immunity from prosecution as a sitting member of Congress up until January 14, when the new Congress was seated.

After several hours of testimony, Judge Carol Patricia Flores Blanco declared that there was indeed enough evidence to bring Ríos Montt to trial for at least 1,771 deaths, 1,445 rapes and the displacement of nearly 30,000 Guatemalans(Washington Post, BBC, Siglo XXI, LA Times). Flores stated that Ríos Montt and other military officials were responsible for the Guatemalan military’s actions “against the unarmed, helpless non-combatant civilian population, which meant multiple human rights violations, deaths, disappearances and sexual abuse, and persecution of the Mayan Ixil ethnic group”.

The prosecution had asked that he be incarcerated immediately because of his potential for flight. However, the judge disagreed, set bail and placed him under house arrest under the watchful eye of the National Civilian Police (PNC). Given the seriousness of the charges, it is disappointing that the judge granted Ríos Montt house arrest, while prosecutors build their case. The defence, on the other hand, was outraged at the judge’s statements, saying she seemed to have already found him guilty, before the trial had even begun.

We will now have to wait until March for the trial to begin. How Ríos Montt will defend himself remains a matter of debate. During Thursday’s hearing, when the judge gave him an opportunity to respond to the prosecution’s allegations, he responded: “I prefer to remain silent.” When the trial begins in two months, he will again have the right to remain silent and to let others speak for him. Legally, it might be his best choice. However, it doesn’t seem likely that he will remain quiet.

Three other former generals have also been charged with genocide and crimes against humanity in Guatemala. Mauricio Rodriguez Sanchez and Hector Mario Lopez Fuentes claim that they are too sick to stand trial. Oscar Humberto Mejía’s trial was suspended earlier this month because the court determined that he wasn’t physically or mentally able to cope with the hearings. Ríos Montt, on the other hand, went to the prosecutors’ office and, more or less, challenged them to bring charges. It seems unlikely, then, that he will now choose to remain silent.

He could argue, such as current President Otto Perez Molina has, that there was an internal armed conflict, but that there were no massacres and no genocide. Following the end of Guatemala’s civil war in 1996, the Commission for Historical Clarification (CEH) found that the state had committed 626 massacres. And in 2011, four former military officers were convicted and sentenced to more than 6,000 years in prison for their roles in the 1982 massacre at Dos Erres in the Petén Department. The officers received sentences of 30 years in jail for each of the 201 men, women and children viciously slaughtered. Women were raped and the unborn cut from their mothers’ wombs. A few local editorials published after the trial criticised the men – but they described the massacre as an “aberration”.

Ríos Montt and his lawyers could follow a similar defence here, but it is tough to understand how the court could agree. He and his lawyers could also refute the international community’s finding that his government carried out acts of genocide, but that would not help him avoid the crimes against humanity charge.

Another option would be to pursue the “I was never on the battlefield” defence to which his lawyers have alluded. He will blame the thousands of deaths and human rights violations on renegade officers, rather than a consequence of state policy. The prosecution has countered that there was a rigid chain of command and the general, as de facto leader of the country, was responsible for his soldiers’ action, even if he wasn’t actually present when the human rights violations were committed.

Natalie Kitroeff writes that this is a risky defence, as it has never been tried in Guatemala before and risks “threatening the military chain of command by deflecting responsibility for wartime violations onto military commanders”. If, instead, he accepts that renegade officers were responsible for any violence directed at civilians, rather than state policy, he runs the risk of driving a wedge between low ranking and high ranking members of the military.

Ríos Montt could also do something out of the ordinary, such as asking for forgiveness. The evidence is overwhelming and it is clear that thousands of Guatemalan, men, women and children, were raped, tortured and killed as part of the government’s counter-insurgency plan to defeat guerrillas in the late 1970s and early 1980s.

As a born again Christian, he could say that he should never have commanded his officers to carry out these operations, express remorse and throw himself at the mercy of the court. He has, however, neither said nor done anything since leaving the presidency 20 years ago that would suggest an apology is forthcoming.

Since it does not look like he is going to extend that apology, I am looking for him to defend his government’s actions. Here, I could imagine him channeling his inner Colonel Jessup from A Few Good Men, and argue:

Kaffee (Tom Cruise): I think I’m entitled to them.

Kaffee: I want the truth!

Jessup: You can’t handle the truth! Son, we live in a world that has walls. And those walls have to be guarded by men with guns. Who’s gonna do it? You? You, Lt. Weinberg? I have a greater responsibility than you can possibly fathom. You weep for Santiago and you curse the Marines. You have that luxury. You have the luxury of not knowing what I know: that Santiago’s death, while tragic, probably saved lives. And my existence, while grotesque and incomprehensible to you, saves lives… You don’t want the truth. Because deep down, in places you don’t talk about at parties, you want me on that wall. You need me on that wall.

We use words like honour, code, loyalty… we use these words as the backbone to a life spent defending something. You use ’em as a punchline. I have neither the time nor the inclination to explain myself to a man who rises and sleeps under the blanket of the very freedom I provide, then questions the manner in which I provide it. I’d rather you just said thank you and went on your way. Otherwise, I suggest you pick up a weapon and stand a post. Either way, I don’t give a damn what you think you’re entitled to.

Kaffee: Did you order the code red?

Jessup: (quietly) I did the job you sent me to do.

Kaffee: Did you order the code red?

Jessup: You’re goddamn right I did.

If the former general believes that the murders, rapes and torture that were carried out under his command were necessary to combat the guerrilla insurgency, he should make that argument to the Guatemalan people. If he believes that the thousands of civilians who were killed, while tragic, saved the lives of untold millions of Guatemalans who otherwise would have been forced to live under the iron rule of the communists had the military not done its job, he should say so. If that is what he believed, and still believes today, he shouldn’t embarrass himself by remaining silent. No one is going to take his defence seriously if he blames a few rogue officers or if he says that no massacres ever occurred. In the end, the only satisfactory outcome will be a guilty verdict that leads to Efraín Ríos Montt spending the remaining years of his life behind bars. How he gets to there remains up to him.

Mike Allison is an associate professor in the political science department and a member of the Latin American and Women’s Studies Department at the University of Scranton in Pennsylvania.  He blogs on Central American Politics here. 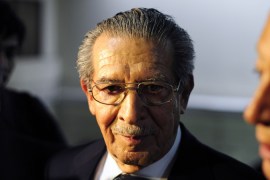 Efrain Rios Montt, the former leader of Guatemala, is accused of genocide and other human rights abuses. 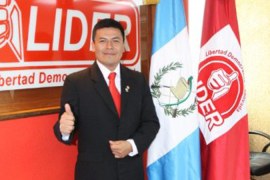 Guatemala congressman gunned down in capital

Oscar Valentin Leal Caal shot dead near legislative assembly where new president will be sworn in on Saturday. 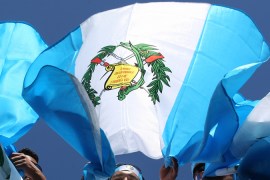 Upholding human rights in Guatemala should be the US’ first priority to avoid its past mistakes. 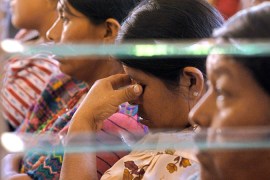 Over 440 men, women and children were massacred to make way for the Chixoy Dam – a World Bank and IADB project.