As America grows increasingly tired of waiting for a resolution to the Fiscal Cliff saga – apparently even the Senators and Representatives themselves are fed up with spending their holidays dealing with the problem – it is a perfect moment to turn to another pressing question of American politics to fill the gap: Is Santa Claus a Democrat or a Republican?

Believe it or not, thanks to the work of multiple polling agencies and the attentiveness of Dr Will Jennings of the University of Southampton, we actually have some data we can bring to bear on this question! 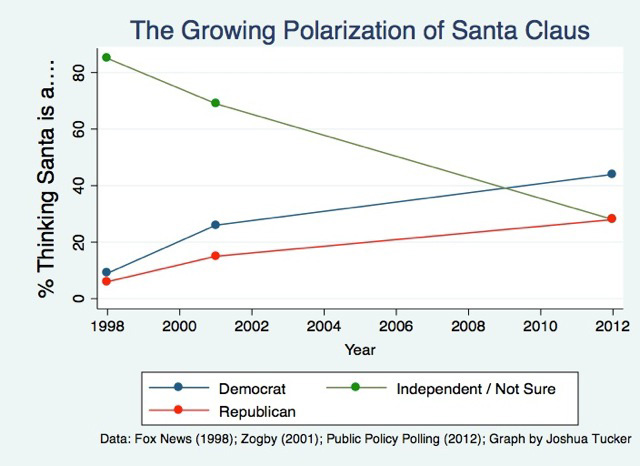 Two developments are immediately apparent. First, in all three years for which we have survey data (1998, 2001 and 2012), more people think that Santa Claus is a Democrat than a Republican! On the one hand, this might not seem that surprising: Santa clearly has a very strong egalitarian streak – despite a claim to distinguish between naughty and nice children, it is the rare child who truly lacks a present from Santa – and his policy of giving “gifts” to his key constituency (children!) seems quite in line with Mitt Romney’s description of Barack Obama’s campaign strategy.

On the other hand, Santa Claus is an elderly, white, male; this is precisely the sub-category of the American population that Mitt Romney most clearly dominated. Plus, Santa Claus runs a small business, and he is obviously not hurting in the personal finances department if he can afford to give away over 7 billion presents. Taken together, perhaps a bit surprising then that more Americans have consistently seen Santa Claus as a Democrat than a Republican – maybe he belongs to the Warren Buffet wing of the party?

The second trend that jumps out from the above figure is that opinions regarding the partisanship of Santa – much like most other aspects of politics in the United States – has become even more polarised over the past decade. Now there is an important caveat in comparing these data is that the most recent poll – conducted by Public Policy Polling on December 5-7, 2012 – did not include an options for “independent” – respondents were asked if Santa was a Democratic, a Republican, or if they were “not sure”.

So part of the difference in the proportion of respondents ascribing a partisan’s proclivity to Santa may be due to the lack of an “independent” option, which was offered in the earlier surveys.  That being said, since “not sure” was given as an option, so in all three surveys voters were offered a chance to not ascribe a partisanship to a beloved holiday figure who brings presents to children all over the world: in 1998, only 15 percent of the respondents could assign him to a party; by 2012, 72 percent of respondents were willing to do so.

What then does the future hold for Santa and US politics? It is of course difficult to imagine anyone who lives at Claus residence becoming more “polarised” (think about it for a second – you’ll get it), and some have suggested that Santa has taken up Canadian citizenship. All we can say for sure at this point, though, is that if you are going to go over a fiscal cliff, probably best to do it with flying reindeer pulling a magic sled…