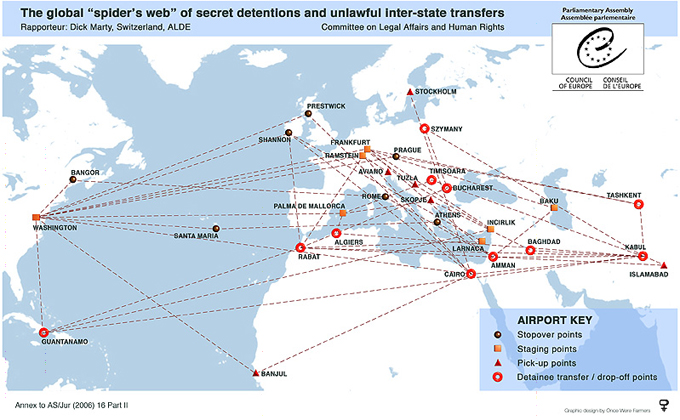 Two of last Thursday’s headlines together provide a good example of the work of imperial forgetting. On the front page of the New York Times, a story about the depiction of torture in the forthcoming national revenge flick Zero Dark Thirty shows how little debates have advanced over the past decade. “Reasonable” interlocutors in the Beltway remain stuck in the inane exercise of sparring over whether some utterance extracted by waterboarding in 2003 somehow contributed to the chain of events that led to Navy SEALs shooting an unarmed man in the face at point-blank range in 2011. Torture was bad, but perhaps it was a good thing after all, so no need to investigate the whole truth and hold people accountable. Moving on…

This is where we run into the second headline. The European Court of Human Rights (ECHR) in Strasbourg, France issued its long-awaited and unanimous decision (summary here) in a suit filed by Khaled el-Masri against Macedonia. El-Masri’s ordeal is one of the best-known horror stories of the war on terror: A German citizen of Lebanese origin, el-Masri was arrested in Macedonia on New Year’s eve in 2003, held incommunicado and interrogated in a hotel for several weeks at the behest of the United States, and then handed over to CIA personnel at Skopje airport. The Court recounts what happened next:

On that occasion [el-Masri] was beaten severely from all sides. His clothes were sliced from his body with scissors or a knife. His underwear was forcibly removed. He was thrown to the floor, his hands were pulled back and a boot was placed on his back. He then felt a firm object being forced into his anus… a suppository was forcibly administered on that occasion. He was then pulled from the floor and dragged to a corner of the room, where his feet were tied together. His blindfold was removed. A flash went off and temporarily blinded him. When he recovered his sight, he saw seven or eight men dressed in black and wearing black ski masks. One of the men placed him in a nappy. He was then dressed in a dark blue short-sleeved tracksuit. A bag was placed over his head and a belt was put on him with chains attached to his wrists and ankles. The men put earmuffs and eye pads on him and blindfolded and hooded him. They bent him over, forcing his head down, and quickly marched him to a waiting aircraft, with the shackles cutting into his ankles.

The CIA held el-Masri in the infamous “Salt Pit” prison in Afghanistan for five months before dumping him on a roadside in Albania. El-Masri’s secret detention and torture had all been based on a mistaken identification – one apparently pushed by a CIA analyst who was later promoted to lead the hunt for Osama bin Laden and provides inspiration for a central character in Zero Dark Thirty. The analyst went on to accolades and cinematic immortality; el-Masri, broken by his experience and frustrated by years of waiting for justice, got in trouble with the law back in Germany and cut off contact with his lawyers in 2010. One hopes this decision and its 60,000 euro reward will provide some vindication.

The el-Masri case is part of a larger effort to litigate torture cases from the war on terror in courts worldwide, in response to the US judiciary’s near total refusal to entertain civil suits by survivors (as Lisa Hajjar detailed here). El-Masri himself filed an early case against former CIA director George Tenet, which was thrown out based on an alarmingly expansive reading of the “state secrets” doctrine. Similar petitions are pending in the ECHR against Poland, Romania and Lithuania. El-Masri also has a suit in the Inter-American Commission on Human Rights. The predominance of European countries on this list stems in large part from the fact that Europe was one of the few regions where sufficient political will and resources existed to investigate the worldwide US-driven prison network. We still know next to nothing about transfers between Africa, Asia and the Middle East, which likely involved far more people.

The strategy of going after America’s collaborators in torture and unlawful detention is a reminder that these atrocities cannot be understood simply as morality plays or in terms of adherence to the rule of law: They are also very much part of how imperial power operates in a post-colonial world. US empire works in large part by getting other countries not only to do its dirty work but also to take responsibility for it as sovereign states. State sovereignty provides a legal form through which equal partners can be tied in unequal power relations. The extraordinary rendition programme illustrates this perfectly: The CIA got its man and Macedonia was stuck in court taking the blame.

Years before el-Masri’s arrest in Macedonia – a country whose independence from Yugoslavia was vouchsafed by a small US army contingent operating under the UN flag at a time when Washington was unwilling to commit peacekeepers to Bosnia – the Balkans were a key site for Washington’s worldwide hunt for suspicious mobile Muslims. In the 1990s, Islamist fighters and charity workers in the region attracted considerable US attention. The first known instance of the CIA’s “extraordinary rendition” programme was in Croatia in 1995, when Egyptian Islamist Tal’at Fu’ad Qasim (interviewed by Hisham Mubarak in 1993 and published here) was arrested and sent home, never to be heard from again. In 1998, the CIA orchestrated the forcible repatriation of several Egyptian Islamists from Albania, who were later tortured and in some instances executed.

If we see the rendition programme not simply as tyranny in the abstract but as an exercise in imperial power across borders, then other stakes beyond the individual victims come into clearer focus. US civil libertarians warn that war on terror “excesses” are a threat to democracy; this is true, but it is often other people’s democracies that suffer first. As meticulously documented by the Council on Europe, the CIA decided in establishing secret prisons in Poland not to cooperate with security agencies answerable to parliamentary oversight. Instead, it partnered with the military intelligence service, which maintained a useful network of informants in other state institutions. Barely a decade after emerging from an authoritarian regime, Poland’s unaccountable shadow state apparatus acquired US support to circumvent its own constitutional framework.

The strategy of offshoring torture, of course, has its limits: When clients come under pressure, recriminations can begin. In many of the US court decisions rejecting torture suits, judges cited the fear that litigation would result in official acknowledgment of other governments’ collaboration with Washington, thus straining relations. Ironically, it is sometimes those other governments that have themselves come clean and pointed the finger at their erstwhile patrons. In the el-Masri case, it was no less than former Macedonian Prime Minister Hari Kostov who submitted a statement describing in detail Macedonia’s collaboration with the CIA. “Macedonia’s status as a reliable partner in global counterterrorism was strengthened by the way we carried out this operation. Our US partners expressed great appreciation for Macedonia’s handling of the matter.” Indeed.

Several judges wrote a concurrence to the el-Masri opinion, expressing their disappointment that the Court was not bolder in establishing the principle of a “right to the truth”, the right to an accurate account of what happened and who was responsible. In this sense, el-Masri is the greatest, but not the only, victim – it is tempting to think that perhaps all of us who live under this imperial order, as citizens or not, are owed some accounting. Instead, with the Obama administration having closed the door on investigations and prosecutions long ago, oblivion is far more likely.

In the American empire, officially sanctioned torture and meager justice for it are both quarantined to unfold in distant lands, headaches primarily for other sovereigns. Meanwhile, in the homeland, the process of national forgetting can move ahead. All that’s left is for a few stale debates and some popcorn propaganda to relegate tales like Khaled el-Masri’s to the footnotes of history.

Darryl Li is an anthropologist and attorney based at the Committee on Global Thought at Columbia University. He is an editor of Middle East Report.

A version of this article first appeared on the Middle East Research and Information Project blog.