Kuwait City, Kuwait – In light of yet another round of negotiations between the Palestinian Authority (PA) and Israeli negotiators (which, it must be said, took place on the heels of an announcement to build more illegal homes in East Jerusalem), questioning the likelihood of negotiations ever resulting in an independent and fully sovereign Palestinian state along the pre-1967 borders is as pressing as ever.

When Prime Minister Netanyahu, during his public scolding of President Obama, referred to the pre-1967 borders as “indefensible” for Israel, he was not expressing a fringe, radical point of view, but rather, frankly articulating what many in Israel’s policymaking circles had implicitly recognised decades ago; that a completely sovereign Palestinian state within said borders, in complete control of the natural resources to which it would be entitled, is an unacceptable option.

Some, such as the Ultra-Orthodox Jewish populations that inhabit the illegal Jewish colonies in the West Bank, or the Christian evangelicals in the United States, endorse this view on a religious basis. However, much more strategic and practical considerations such as the issue of water also make the 1967 borders “indefensible”. It is on this basis – the basis that Israel cannot accept a sovereign Palestinian state rightfully in control of its water resources – that I argue the need for a paradigm shift in mainstream Palestinian discourse from a two-state solution to a one-state solution.

The one-state option can theoretically take either a unitary or bi-national form, with the latter codifying some form of distinct national identity within the political structure. A bi-national state would help promote minority protection, but might also cement national divisions that might otherwise fade in a generation or two.

Many academics, such as Rashid Khalidi, point to the fact that a de facto one-state reality has already emerged, with different classes of citizenship designated for Israeli Jews, Israeli Arabs, and Palestinians; effectively constituting an apartheid system.

However, endorsing a unitary or bi-national state is often seen as a radical or extreme view, as those in power would prefer to restrict the range of discourse and the parameters for seeking a solution to a two-state framework where “nothing is agreed until everything is agreed”. This ensures that virtually no progress is made in changing the status quo. And isolating an issue such as water exposes the reality that proponents of the occupation have for decades shaped the facts on the ground to ensure its perpetuity.

Water issues often receive minimal attention as compared with the right of return or the status of Jerusalem. But water security, and more specifically, the policy of consolidating control over the freshwater resources of the occupied Palestinian territories (OPT) has always been a cornerstone of Israel’s security policy. The recognition of the need to maximise access to water at the expense of Arab neighbours even predates the creation of the Israeli state, as records show Chaim Weizman lobbied the British extensively in 1919 to include the Litani within the borders of any future state that was to be designated for the Jews.

Today, Israel’s dependence on water that lies within the OPT is high, constituting roughly 60 per cent of the Israeli water supply. The Mountain Aquifer is the most significant shared water resource between the Israelis and Palestinians, with 80 per cent of it located under the West Bank.

Yet, Israel restricts Palestinian use of the Mountain Aquifer to no more than 20 per cent of its annual yield. Since the beginning of the occupation, Israel has enacted legislation [PDF] and imposed other measures to restrict Palestinian use of the freshwater to which they are entitled in order to be able to maximise its availability for Israelis.

There has been a consistent policy of denying Palestinian access to their water achieved through comprehensive measures, such as refusing to grant permits to build or repair water wells in the OPT. In 1989, Israel’s Ministry of Agriculture bluntly stated the imperative that, regarding the OPT: “It is difficult to conceive of any political solution consistent with Israel’s survival that does not involve complete, continued Israeli control of the water and sewerage systems, and of the associated infrastructure.”

Prime Ministers Begin, Barak and Sharon, all considered full and complete Israeli control of Palestinian water use and extraction as a pre-condition to any conceivable Palestinian state. Furthermore, the expropriation of Palestinian water factors largely in the locations of Israel’s West Bank colonies, as well as the route of its apartheid wall. And as water scarcity becomes exacerbated by growing populations and climate change, one can only expect these policies to continue.

Under these conditions, it is clear that any two-state solution granting the Palestinians complete sovereignty is a non-starter for the Israelis. Conversely, any solution that might theoretically be acceptable to the Israelis presupposes a Palestine that is not in control of its water resources, and hence is not sovereign.

The context for an independent Palestinian state has always been restricted to the two-dimensional surface, ignoring the three-dimensional nature of the occupation as described by Eyal Weizman in his “Politics of Verticality” concept, whereby Israel retains full control of the airspace above and the resources beneath the ground. Yet, the PA continues to peddle the two-state solution even as it has brought about nothing but the opportunity to consolidate the occupation and increase the likelihood of its permanence.

Pushing for a one-state solution does away with sacrificing basic Palestinian rights and entitlements for the sake of practicality (and the leaked “Palestine Papers” reveal just how extensive such sacrifices would have to be in order to be accepted by Israel). As any political realist can attest to, Israel has everything to gain from continuing perpetual, fruitless negotiations with Palestinians, while it continues to confiscate Palestinian land and resources.

Support for the right-wing Zionist agenda has become structurally embedded in the US political system (a look at the US Congress and the Republican primary elections confirm this fact), and the US continues to be the main broker in Israeli-Palestinian negotiations. The statehood declaration, although bold, achieved little beyond symbolism. In this context, there needs to be a complete paradigm shift on the part of mainstream Palestinian voices to endorse a one-state solution.

As isolating solely the water issue reveals (not to mention other, more divisive issues such as the right of return), expecting a just two-state solution can almost be considered an impossibility. Rejecting the pursuit of a one-state option, the only just possibility, because of its impracticality, does not take into account similar arguments that were made about apartheid South Africa.

Parallels can also be made with Northern Ireland, Belgium, and even Canada. Endorsing such a shift in discourse and advocacy will surely be difficult, as it would require among other things alterations in existing national identities. But such a pursuit has the advantage of having as its end goal a just solution. And surely it can’t possibly yield less than the quest for two-states has so far.

Ramzi El Houry is a PhD candidate at Freie University in Berlin. He is currently based in Kuwait as an Adjunct Professor and Programme Coordinator for the Centre for Gulf Studies at the American University of Kuwait. 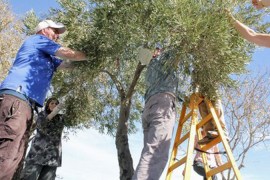 After uprooting thousands of olive trees, Israel’s latest plantation may pose a fire risk to its own citizens. 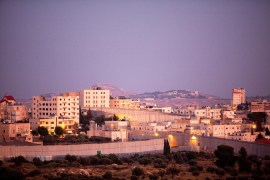 Living in the shadow of the Wall

Bethlehem residents can only watch as the Israeli Wall surrounds the town and slowly chokes the life out of it. 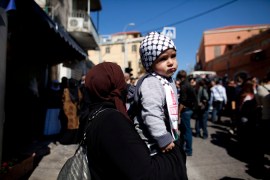 Palestinians in a ‘Jewish state’ 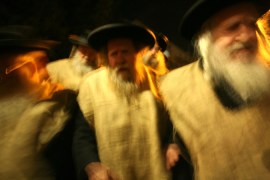 Israel’s Ultra-Orthodox community, like the government, believes they are exempt from having to justify their behaviour.

Water scarcity and the Israel-Palestine issue