Paris, France – The recent publication of French judge Trevidic’s report on the assassination of President Habyarimana, which triggered the genocide of 800,000 Tutsis and the deaths of moderate Hutus in Rwanda in 1994, revives the debate on the possible role of France in the last genocide of the 20th century. Moreover, it rekindles questions related to the attitude of French authorities and intelligentsia whenever the country is directly involved in a genocide in Africa.

More worrying, these findings question the poison slowly instilled in the veins of the French nation’s collective body: A recent poll shows that one third of French citizens share the views of an openly racist and anti-Semite political party, the National Front.

Unspoken history, attempts at denial, and historical smokescreens systematically orchestrated by those who own the means of propaganda challenge the capacity – for those in France who disagree with the far-right – to help a disturbing truth emerge.

In the light of this revelation, one can notice strange similarities in the attitude adopted by those authorities regarding the question of the lesser-known Bamileke genocide orchestrated by the French army at the beginning of the 1960s, which might have caused the death of up to 400,000 people.

On January 11, 2012, French Judge Marc Trevidic published a 400-page investigation on the circumstances of the shooting of “Presidential Falcon 50”, in which President Juvenal Habyarimana and the President of Burundi, along with other officials and three French crew members, were assassinated. The report concludes that the missiles which hit the airplane were shot from Konembe hill which was at that time in the hands of the Presidential guard.

The elucidation of these events will give an explanation to the beginning of the last genocide of the 20th century: the plane crash triggered the systematic murder of 1 million Tutsis in 100 days by extremist Hutus.

The Trevidic Report puts an end to 18 years of uncertainty and attempt to revise history. In fact, a first investigation led by French Judge Jean-Louis Bruguière showed that the RPF (Rwandan Patriotic Front) – the army of the actual Tutsi President of Rwanda, Paul Kagame – was responsible for the attack, and thus responsible for the elimination of other Tutsis. This theory was embraced by numerous French politicians and intellectuals, such as journalist Pierre Péan, who in 2005 published Black Furies, White Liars. His book, along the same lines as the legal investigation, not only suggests that RPF was the perpetrator of the presidential assassination, but also upheld that only 280,000 Tutsis had been killed, compared with possibly one million Hutus exterminated in revenge by Kagame’s RPF.

In the first place, one can question the position of Agathe Habyarimana, widow of former Rwandan president: it is indubitable that the massacres were started and encouraged by Hutu extremists. This vague expression conceals the name of the informal organisation, recognised by the French National Assembly in 1994, which regrouped these “extremists”: the Akazu. Their most influential members were close relatives of President Habyarimana, and might have been headed by Agathe Habyarimana, along with three of her brothers, according to several reports. The day following the assassination of her husband, she was exfiltrated to France with the help of the French army. Since then, she has been living in France. Despite an international arrest warrant issued against her in 2009, and a complaint lodged by a French association over her alleged role in the perpetration of the genocide, she hasn’t yet been judged by a court.

Another enigma surrounds the alleged suicide of François de Grossouvre, former shadow adviser on African Affairs to President François Mittérand, at Elysee Palace, the French president’s official residence. He died on April 7, 1994, just a few hours after Habyarimana was assassinated. Voices have been raised to denounce a possible murder and a slapdash investigation.

The role of Paul Barril also raises interesting questions. Barril, the former commander-in-chief of the GIGN (National Gendarmerie Intervention group), may have been introduced in Rwanda as the special adviser to Juvenal Habyarimana on military affairs after the launch of “Operation Noroit”, which officially aimed to protect French interests in the country, but also served as a way to train the Rwandan army after the offensive by Paul Kagame’s RPF in October 1990. This military help from France resulted in the increase of trained Rwandan soldiers: the army of the country went from 5,000 men in 1990 to 50,000 in 1994.

The aspects of these events obviously explain why French soldiers of “Operation Turquoise”, which, in June 1994, was supposed to put an end to the massacres, were welcomed as liberators by the auxiliary of horror, those who were perpetrating the unspeakable crime against other human beings.

Denial of the Bamileke genocide

Going to the west of the continent and a few degrees of latitude north, arguably the first genocide in Africa of the 20th century was perpetrated nearly 40 years earlier in Cameroon. The death toll, still debated by many experts, ranges from 100,000 to 400,000 people killed between 1959 and 1964, with a reported 120,000 killed in 1960 alone – just in the country’s western region, populated by an ethnic group named the Bamileke.

Much less about this is known however, since the archives detailing direct French involvement remain under the seal of secrecy by the French state. The recent publication of a journalistic and historical thesis by two French journalists and a Cameroonian historian, recounts in detail the war by France on the edge of the independence of Cameroon to impose the first president, Ahmadou Ahidjo, to a population which in a majority supported the Cameroonian Independence Party, testimony in support of survivors of the massacres and actors, as well as the paradoxically more accessible archives of the Cameroonian army, and has gradually begun to open the wall of silence in which the French authorities had sealed the question of this genocide.

The answer given by French Prime Minister François Fillon during his official visit in Yaounde in 2009 might therefore attest the same memoricide will: “I absolutely deny that the French forces were involved in anything related to murder in Cameroon. All this is pure invention.”

However, the Cameroonian national archives reveals that the training of Cameroonian military loyalists included the French technique named “counter-revolution”, which proved its efficiency in Algeria and Indochina a few months earlier; the sending of French troops, who, for months, directly plundered hundreds of villages and hamlets in the mountainous Bamileke area; and the direct implication of the highest French authorities.

The evils of history are alive. Regarding the Bamileke farming villages wiped out by pilots of the French army, terrifying and eloquent figures exist. A French military report counts “43,363 incendiary cartridges of 7.5mm used against the enemy” for the single month of March 1960. According to a witness, the planes flew over the villages in pairs: the first poured fuel and the second shot incendiary bullets. How many Bamileke farmers were killed in these raids?

How many villages were simply wiped off the map? On the use of napalm or other combustible fuel on the Bamileke by the French army. Pierre Messmer, who was defence minister under General de Gaulle for nine years, probably gained his appointment thanks to the success of this “pacification of Cameroon” operation. Then the prime minister answered in a television documentary on French television: “It’s not important.”

General Max Briand, named to head the French Expeditionary Corps from December 1959, acknowledged in a report to his superiors 20,000 deaths for the year of 1960 alone. This figure is to be taken with great care; the assessment of the French military is a low figure, in terms of military resources deployed, the ammunition used and the demographics of the country. Unlike Prime Minister Francois Fillon, the soldier nowhere denies direct involvement of French troops in what can be called with no euphemism a mass killing, and even concedes that the “rebels” had almost no weapons: “It seems that the only weapons that were introduced in Cameroon are forty Czech guns…”

If today, General Semengue, a major actor in the Cameroonian forces and Auxiliary of the French army, who later became Chief of Staff of the Cameroonian army, can make jokes before cameras, smile at the corner of the lips, and explain away the decapitation of heads [FR], it is precisely because this memoricide work was conducted in an implacable way.

Contrary to what some will assume, this memory work should not and will not be a pretext for repentance or reparation demands, but will give the possibility to millions of French, Rwandan and Cameroonian citizens to imagine an appeased future. As Urugayan writer Eduardo Galeano writes: “We know that the loss of our memory mortgages the future. Those who cannot learn from their past are condemned to live without the possibility of imagining it.”

Julie Owono is a freelance Cameroonian journalist and international relations consultant based in Paris. She blogs at Global Voices and is the Africa Desk Cordinator at Internet Sans Frontières, a French NGO which promotes online freedom of expression. 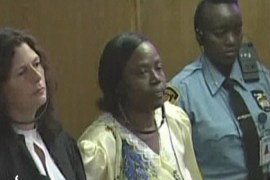 Former minister of women’s affairs becomes first female to be convicted of genocide by UN court for Rwanda. 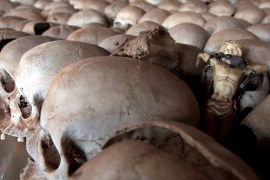 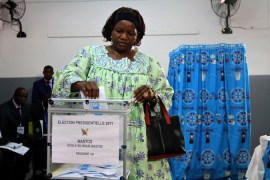