On the night of August 17, several Turkish military jets bombed the Qandil mountains in Northern Iraq. Their target was the headquarters and the training camps of the PKK, the outlawed Kurdistan Workers Party, which is a terrorist group according not just to Ankara but also Washington and most European capitals. Since then, strikes have continued intermittently, and word has it now that the Turkish government is also planning a ground operation against the PKK.

Criticisms have been raised in the face of this anti-terrorist campaign. Some PKK sympathisers in Turkey condemned the attacks and attempted to organise “human shields” to protect PKK bases. The Iraqi Kurdistan Regional Government argued that Turkish air strikes hit not just PKK militants but also seven civilians, although the charge has been denied by the Turkish military. Yet, due to this alleged collateral damage, some commentators draw parallels between Turkey and the Israeli incursions in Gaza to which Turkey strongly objects. Hence a tongue-in-cheek critique read, “Turkey Commits War Crimes in Iraq: Where’s Goldstone?,” while another one called for “a flotilla in support of the Kurds”.

But what is really happening in North Iraq? And why Ankara is doing it?

In a sense, this is simply the latest round of the almost 30-year-old conflict between the Turkish security forces and the PKK. But, in another sense, things are different this time, for the Turkish approach to its “Kurdish problem” has changed significantly in recent years.

To begin with, one has to acknowledge that Turkey has a shameful history with regards to its Kurdish citizens. The republic, which was founded in 1923 from the remains of the more pluralist Ottoman Empire, decided to forcefully assimilate its Kurds, which make up some 15 per cent of its population. Hence, from the mid-1920s, the Kurdish language was banned and Kurds were declared “of the Turkish stock”, or, in a later version, “mountain Turks” who forgot who they were. The successive Kurdish rebels who protested these official policies were brutally suppressed, making Turkey’s Kurdish-dominated southeast an ever-“sensitive” region.

The PKK, which launched a guerilla war against the state in 1984, was partly a reaction to this authoritarian legacy of the Turkish state. But the PKK, with a blend of ethnic nationalism and orthodox Marxism-Leninism, was even more authoritarian, which was evident in the violence it unleashed even on the Kurds who refused to support its cause. Over the years, many such “traitor” Kurds, along with their families, were massacred by the PKK. PKK fighters attacked Turkish civilians as well, such as teachers in the region whom they saw as “agents of Turkish cultural imperialism”.

The conflict between the PKK and state forces reached its peak in mid-90s, during which both sides committed various atrocities. It is now regrettably accepted in Turkey that the gendarme and the police committed thousands of extra-judicial killings during that massive anti-insurgency campaign, which achieved a temporal success in 1999 with the capture of PKK leader Abdullah Öcalan, who is still in a special Turkish prison.

A new era began in Turkey in 2002, when the Justice and Development Party (JDP) led by Recep Tayyip Erdogan came to power. AKP’s vision not only differed from the official definition of secularism but also the official definition of national identity. In 2003, the AKP government introduced EU-encouraged legal reforms that lifted most of the bans on the Kurdish language. In 2005, when the PKK announced the end of its years-long cease-fire, Prime Minister Erdogan, in a speech in predominantly Kurdish Diyarbakir, acknowledged the “Kurdish question” in which “the state has made mistakes”. He also began speaking of a more pluralist Turkey, in which not everybody was Turkish, but Turks, Kurds, Arabs, Circassian, and other ethnic identities were bonded through citizenship.

Yet none of this impressed the PKK, and its implicit political representatives in the Turkish parliament, as their demands focussed not on more rights for Kurds, but on more concessions for the group, such as the release of Öcalan and the amnesty for all terror convicts and suspects. In 2009, the AKP government signaled that it could accept some of these demands by launching a process called “the Democratic Opening”. Despite widespread suspicion among its voter base, and accusations of “high treason” from opposition parties, the Erdogan government opened a 24-hour state TV in Kurdish, lifted remaining bans on the language, and even welcomed a group of PKK guerrillas to Turkey as the first step of a “peace process”.

However, the PKK remained not just unsatisfied but also growingly irritated for a specific reason: AKP’s “democratic opening” was not enough to satisfy the PKK, but it was enough to win many Kurds, making the AKP the most popular party among them. (Pro-PKK parties have never won more than 6 per cent of the votes, while the rest of the Kurdish vote, some 10 per cent, has gone overwhelmingly to the AKP in all elections since 2002.) This made the AKP, the most Kurdish-friendly mainstream political party in Turkish history, the greatest target of the PKK. No wonder more than a hundred AKP bureaus in the Kurdish southeast were attacked by PKK militants and supporters during the election campaign of 2011.

Since the general elections in last June, which resulted in an overwhelming AKP victory, the PKK’s attacks have escalated, leading many Turkish liberals, who used to be more lenient with the organisation, to redefine it as a part of the problem and not the solution. In mid-June, in the wake of a terrorist attack, pro-PKK politicians took another step by unilaterally declaring “autonomy” in the southeast, whose blueprints talk about organising the whole Kurdish society beginning with “village communes”. Various Turkish political scientists, including liberals who defend Kurdish rights, have condemned the plan as a “totalitarian” vision to impose PKK ideology and control on all Kurds.

This ongoing violence of the PKK – and its urban wing, the KCK – led the AKP government to respond with security measures. First came the 2009 arrest of hundreds of KCK members, who are accused of preparing terrorist attacks in urban centres. Yet still, the government refrained from a massive military operation against the PKK until very recently. However, the killing of more than 40 Turkish soldiers in late July and early August by the PKK led Erdogan to an enough-is-enough moment. Hence the air strikes.

In short, the current Turkish operation against the PKK is a legitimate act of self-defence. Surely, as the government also knows, there is no definitive military solution to the problem, and what is ultimately needed is a political settlement. But no government can chose inaction in the face of aggression. Plus, it takes two to tango, and the PKK refuses to be one, by constantly raising the stakes and using violence to impose them. In the face of a Turkey which has changed so dramatically and positively, it remains an archaic terrorist force. So Ankara is right to use “sticks” to deal with the PKK, hoping that it might be interested rather in the “carrots”, which are always on the table.

Mustafa Akyol is a Turkish journalist, and the author of the just-released Islam without Extremes: A Muslim Case for Liberty(W.W. Norton) 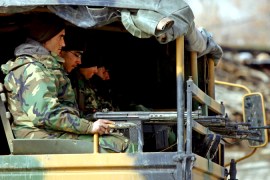 Turkish military says up to 100 Kurdish separatists killed and dozens injured in days of air strikes over northern Iraq.