NEW DELHI – The September 7 bomb blast at the entrance to the High Court in New Delhi was a macabre finale to a summer of crisis. Previously, weeks of anti-corruption protests launched by Anna Harare, and supported by the country’s rising middle class, had brought India’s government to a virtual standstill. This was followed by an embarrassing surrender to the demand of protestors that a powerful new anti-corruption agency be established.

For some people, the protests that paralysed large swathes of the capital were akin to a festival. Others, following the government’s retreat, grandiosely thought the events amounted to a revolution. To be sure, a large part of urban “middle India” has revolted against the tyranny of daily corruption. But will the Harare-led protests deliver real change or merely media hyperbole?

Whichever side one takes, the consequences are disturbing: Indian society, the core of Indian nationhood, is now questioning the very legitimacy of the Indian state.

India’s nationhood resides in a non-territorial civilisational entity. The Indian state, on the other hand, is a historical variable that has periodically governed parts of the subcontinent. Following independence in 1947, a centralised Indian state emerged for the first time. For citizens, the Indian state is the great provider – mai-baap, literally “mother and father.”

The strength of Indian nationhood, however, lies not in this state but in Indian society. This idea was at the core of Gandhi’s beliefs; he emphasised “reform of society,” because only that, he believed, could correct the state’s ills. Herein lies the central disconnect, and also the source of discontent, for today’s India: if and when an Indian citizen now approaches this state, for even the most routine of needs, the state inflicts pain rather than providing succor.

The Indian state’s fundamental inability to redress grievances, correct mistakes, and attend to its citizens’ most basic needs has given rise to a ruinous level of corruption, as citizens, despairing of obtaining their due fairly, try to buy it instead. The state then turns into a monopoly seller, and thus an enemy of its own society.

For Anna Harare and his followers, the only solution is another state agency – a vast and all-powerful anti-corruption watchdog with the power to coerce and intimidate. Others call for a spiritual revival within Indian society.

It is no surprise, of course, that large crowds cheered for Harare and his anti-corruption movement, by which they assumed a vicarious role in slaying the demon of corruption. Their abuse was reserved for “evil parliamentarians” – or any politicians – as vile agents of a crooked state.

Unfortunately, India’s government misunderstood the anti-corruption protests from the start. At first, Prime Minister Manmohan Singh stood firm against Harare’s demands on technical grounds. But this proved insufficient to halt a growing sense of drift and decay concerning his Congress Party-led coalition.

This sense of malaise was highlighted on India’s Independence Day (August 15). Confronted by multiple charges of corruption against his government, the prime minister’s address to the nation partly sought to divert attention from the scandals by focusing, bizarrely, on a litany of other problems, from high inflation and the Naxalite rebellion to persistent malnutrition and terrorist attacks. Yet the overriding theme remained corruption. And what else could it be? After all, the current government is possibly the most corrupt, in every sense, that India has ever experienced.

Were periodic elections the only yardstick of democracy, India would have achieved what US Secretary of State Hillary Clinton calls the “gold standard.” But that is far removed from reality and the nature of its ruling party. The Congress Party, to paraphrase Brown University’s Richard Snyder, resembles a “neo-patrilineal dictatorship,” in which “[p]eople get goodies for being close to the ruler.” Proximity to the Gandhi family is everything.

Congress, at its core, pursues a form of dynastic democracy with the characteristics of a “Sultanistic regime” – a regime with no purpose or function apart from maintaining the “leader’s personal authority.” But, though such leaders perhaps have more personal authority than even medieval monarchs, their authority is brittle. Moreover, societies lose their cohesion under such regimes; they begin to lack a shared set of values, for they become relegated to living in “a belief vacuum.”

There is another depressing aspect to the corruption debate. Both Singh and the US State Department helped spread the canard that foreign influence was at work behind the scenes. “External forces,” Singh declared in Parliament, are trying to prevent India from taking “its true place” in the comity of nations. “We must not play into their hands,” he intoned gravely.

Meanwhile, a State Department spokesperson urged India’s authorities to act with “appropriate democratic restraint” in response to the crisis provoked by Harare’s protests. This was an egregious bit of meddling. After all, non-violent protests are an Indian specialty

But Gandhi’s yardstick for non-violent protest was satyagraha – “the protest of truth.” By contrast, India’s current anti-corruption protests may be missing the point, for the central challenge in fighting corruption is to establish a freedom born of righteous conduct, not to authorise a new source of state coercion. Indian society must regain its strength – and its proper role. Only when India, as the great poet Rabindranath Tagore put it, is a place “where the head is held high and the mind is without fear” will it be able to act with the confidence, honesty, and generosity its citizens demand and deserve.

A version of this article previously appeared on Project Syndticate 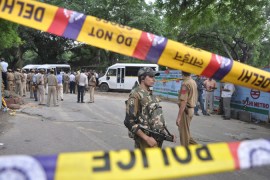 The (in)visible in Indian terrorism

Indian Muslims are often accused of terrorist links, but in many cases it is Muslims themselves who are terrorised. 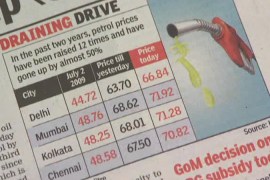 Opinion: The lynchpin of Asia