The number is 0.2 per cent. It is the average annualised growth of US consumer spending over the past 14 quarters – calculated in inflation-adjusted terms from the first quarter of 2008 to the second quarter of 2011. Never before in the post-World War II era have American consumers been so weak for so long. This one number encapsulates much of what is wrong today in the US – and in the global economy.

There are two distinct phases to this period of unprecedented US consumer weakness. From the first quarter of 2008 through the second period of 2009, consumer demand fell for six consecutive quarters at a 2.2 per cent annual rate. Not surprisingly, the contraction was most acute during the depths of the Great Crisis, when consumption plunged at a 4.5 per cent rate in the third and fourth quarters of 2008.

As the US economy bottomed out in mid-2009, consumers entered a second phase – a very subdued recovery. Annualized real consumption growth over the subsequent eight-quarter period from the third quarter of 2009 through the second quarter of 2011 averaged 2.1 per cent. That is the most anemic consumer recovery on record – fully 1.5 percentage points slower than the 12-year pre-crisis trend of 3.6 per cent that prevailed between 1996 and 2007.

These figures are a good deal weaker than originally stated. As part of the annual reworking of the US National Income and Product Accounts that was released in July 2011, Commerce Department statisticians slashed their earlier estimates of consumer spending. The 14-quarter growth trend from early 2008 to mid-2011 was cut from 0.5 per cent to 0.2 per cent; the bulk of the downward revision was concentrated in the first six quarters of this period – for which the estimate of the annualized consumption decline was doubled, from 1.1 per cent to 2.2 per cent.

I have been tracking these so-called benchmark revisions for about 40 years. This is, by far, one of the most significant I have ever seen. We all knew it was tough for the American consumer – but this revision portrays the crisis-induced cutbacks and subsequent anemic recovery in a much dimmer light.

The reasons behind this are not hard to fathom. By exploiting a record credit bubble to borrow against an unprecedented property bubble, American consumers spent well beyond their means for many years. When both bubbles burst, over-extended US households had no choice but to cut back and rebuild their damaged balance sheets by paying down outsize debt burdens and rebuilding depleted savings.

Yet, on both counts, balance-sheet repair has only just begun. While household-sector debt was pruned to 115 per cent of disposable personal income in early 2011 from the peak of 130 per cent hit in 2007, it remains well in excess of the 75 per cent average of the 1970-2000 period. And, while the personal saving rate rose to 5 per cent of disposable income in the first half of 2011 from the rock-bottom 1.2 per cent low hit in mid-2005, this is far short of the nearly 8 per cent norm that prevailed during the last 30 years of the twentieth century.

With retrenchment and balance-sheet repair only in its early stages, the zombie-like behavior of American consumers should persist. The 2.1 per cent consumption growth trend realized during the anemic recovery of the past two years could well be indicative of what lies ahead for years to come.

Such an outcome would have three profound implications for the economic outlook: First, since consumer demand still accounts for 71 per cent of real GDP, a protracted shortfall in trend consumption represents a major headwind for overall US economic growth. While misguided Washington policymakers would like nothing better than for consumers to return to their old risky ways and start spending again, over-extended American households now know better. The heavy artillery of monetary and fiscal stimulus is being wasted on attempts to short-circuit balance-sheet repair.

Second, persistent weakness in consumption and GDP growth puts the US economy on a much weaker growth trajectory than that which is built into the government’s long-term budget estimates. The Congressional Budget Office is assuming 3.4 per cent average growth in real GDP over the 2013 to 2016 period. If the growth trend is one percentage point lower – a distinct possibility in an era of protracted consumption weakness – budget deficits would be a significantly higher.

Indeed, a CBO rule of thumb equates a sustained one-percentage-point shortfall in real GDP growth with budget deficits that are roughly $3 trillion larger over a ten-year period. Needless to say, such an outcome would spell serious trouble for America’s already-contentious deficit-and-debt debate.

Finally, no other economy is capable of filling the void left by a protracted shortfall of US consumption. Europe and Japan are in no position to take up the slack, and consumer sectors in the world’s major developing economies – especially China – lack the scale and dynamism to take over. So enduring weakness in US consumption implies pressure on the growth of export-led developing economies. The good news is that will force them to embrace long-overdue rebalancing strategies aimed at stimulating domestic consumer demand.

What can be done? While measures adapted in the depths of the crisis – massive fiscal and monetary stimuli – were effective in placing a bottom under the free-fall, they have been ineffective in sparking meaningful recovery. That should hardly be surprising in an era of balance-sheet repair.

Instead, the US needs a menu of policies tailored to the needs and pressures bearing down on American consumers. Some possibilities: debt forgiveness to speed up the deleveraging process; creative saving policies that restore financial security to crisis-battered Americans; and, of course, jobs and the income they generate.

The US economy – as well as the global economy – cannot get back on its feet without the American consumer. It is time to look beyond ideology – on the left as well as on the right – and frame the policy debate with that key consideration in mind. 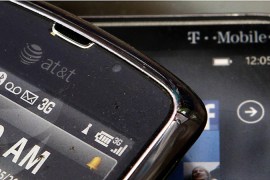 US tries to block AT&T merger with T-Mobile 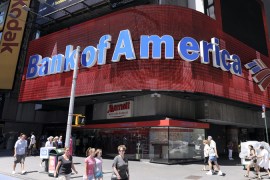 US ‘to sue major banks over mortgages’

Lawsuits will seek $20bn in compensation for banks’ failure over subprime home loans, according to reports. 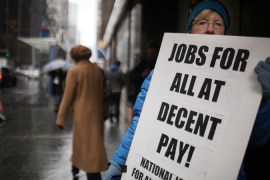 US job growth grinds to a halt