Old people are becoming everyone’s favourite scapegoat for America’s economic woes. Among the growing ranks of self-styled deficit hawks, Social Security and Medicare are depicted as an intolerable burden to the nation’s already crippled economy, which can only be saved through massive cuts to these so-called old-age entitlement programs. To advance this agenda, proponents of entitlement cuts have attacked not only the programs themselves, but the people who benefit from them – the selfish old folks like myself, who insist upon bankrupting the country for the sake of their own costly health care and retirement income.

We in the over-65 set have become the present-day equivalent of Reagan’s notorious “welfare queens,” supposedly living high on the hog at the expense of the taxpayer. According to what I call the Myth of the Greedy Geezer, we lucky oldsters spend our time lolling about in lush retirement villas, racing our golf carts to under-priced early-bird dinner specials and toasting our good fortune with cans of Ensure – all at the expense of struggling young people, who will never enjoy such pleasures since the entitlement “Ponzi scheme” will collapse long before they are old.

The fervour for entitlement-cutting remains strongest among conservatives, but these days, even President Obama is taking part, promoting the recommendations of his National Commission on Fiscal Responsibility and Reform, commonly known as the Deficit Commission (and to its opponents as the Cat food Commission, since that’s what old people will be eating when the Commission finishes its work).

“Go to the bow-wows”

The appointed chair of the Deficit Commission, Alan Simpson, is one of the primary promulgators of the Myth of the Greedy Geezer. A former Republican senator from Wyoming who is known for his colourful turns of phrase, Simpson insists that “This country is gonna go to the bow-wows unless we deal with entitlements, Social Security and Medicare.” The majority of the people opposed to such cuts, he claims, are “These old cats 70 and 80 years old who are not affected in one whiff. People who live in gated communities and drive their Lexus to the Perkins restaurant to get the AARP discount. This is madness.”

Simpson says he wants to cut entitlements for the sake of his grandchildren, whom he described as “little lambs led to slaughter. They are totally uncomprehending,” Simpson continued. “They have no idea that when they reach 60 – under the present system – they’ll be picking grit with the chickens.”

A similar argument was made recently by New York Times columnist David Brooks, who called for a “spontaneous social movement” by elders to reduce their own benefits. “It now seems clear that the only way the US is going to avoid an economic crisis is if the oldsters take it upon themselves to arise and force change,” Brooks wrote,” envisioning “millions of people demanding changes in health care spending and the retirement age to make life better for their grandchildren.” (In another column, Brooks suggested that the “old and ailing” might think about pulling the plug on themselves to reduce health care costs.)

As Brooks suggests, getting old people to shoot themselves in the foot is the only way to accomplish his goals, since we darned geezers are living so long and voting in such large numbers that we’ve become a formidable political force.  80 per cent of the over-65 population is registered to vote, and nearly three-quarters of those registered say they actually make their way to the polls. And of course, the numbers of older people will only grow as the Baby Boomers reach their dotage: The over-65s currently make up 12 per cent of the population, but by 2050 they will be more than 20 per cent.

Half of the income

What’s more, contrary to the Greedy Geezer Myth, most of these people are far from wealthy. Their average income in 2008 was $29,449. Many of these “welfare queens” don’t retire, but keep on working – if they could find a job, often part time, at lower wages than they received when young.  Ninety three per cent of all American workers are covered by Social Security, and for more than two thirds of them Social Security amounted to half their income. For a quarter of all these people it was their only source of income. Average monthly Social Security benefits at the end of 2008 were $1,153 for a retired worker and $1,877 for an elderly couple.

Suzy Khimm at Wonkblog points out that the poverty level among senior in 2009 was at 8.9 per cent, and “it’s remained essentially flat since then. Why? It seems that Social Security has provided a safety net that’s weathered the recession: without this income, the poverty rate for Americans over 65 would have risen by 13.8 million, the Census says.” In these hard times, Social Security has been a lifeline for elderly people whose 401ks and home values have plunged. And with private companies rushing to eliminate the old fashioned private pension plans, it is for many the last saving grace.

It’s important to note that contrary to hyped up media reports, neither Social Security nor Medicare are likely to go broke. Trustees of Social Security report it won’t go broke for 40 years. As for Medicare, running out of money might crimp hospital benefits, maybe by 10 per cent. The parts that cover physicians payments and pharmaceutical drugs gets their funding from tax receipts, and would never would go bankrupt.

Why, then, does the Myth of the Greedy Geezer have so much traction? This fabrication serves a myriad of purposes. It substitutes a phony intergenerational conflict – a phantom battle between young and old – for the real conflict in American society: the conflict between the interests of poor and middle-class people, who pay more than their fair share, and the corporations and wealthy elite, who get an easier ride in America than they do anywhere in the developed world.

In the past 30 years, according to Congressional Budget Office data, the income of the top one per cent of Americans has risen 176 per cent, while the middle fifth have seen a 21 per cent growth in income, and the poorest fifth just six per cent. But there’s no need to talk about taxing the rich when you can balance the budget on the backs of those Greedy Geezers? Wall Street had to be bailed out to the tune of $1tn, and they’re back to business as usual. But why take measures that might “stifle” the “freemarket” when we can just cut Social Security instead?

Millions of Americans suffer and even die from inadequate health care, and medical costs drive thousands into bankruptcy every year. But why should we expect the drugmakers and insurance companies to reduce their hefty profits, when we can just reduce Medicare payments to those Greedy Geezers? After all, does grandma really need that hip replacement when it means taking money out of the hands of her grandchildren? Should grandpa have a triple-bypass, just to get a few more years of life, when it means bankrupting the country?

What we have here is a classic bait-and-switch. Politicians are talking about the urgent need to cut Medicare because Democrats and Republicans alike won’t take on the real enemies of affordable health care – the insurance companies, Big Pharma, and other providers of medicine for profit. They’re saying we have to “reform” Social Security (a program which, compared to Citibank and Goldman Sachs, has been a model of financial solvency) because they are unwilling to really take on Wall Street. They’re devising ways to skim off of entitlements, which have lifted millions of old people out of dire poverty, because they won’t consider a more “socialist” tax structure – like, for example, the one we had in the United States during the Nixon Administration.

In the long run, the Myth of the Greedy Geezer also serves one of the most cherished items on the conservative agenda: permanent cuts to core social safety net programs that date back to the New Deal and the War on Poverty. Dean Baker of the Centre for Economic and Policy Research wrote: “It should be evident that the granny bashers don’t care at all about generational equity. They care about dismantling Social Security and Medicare, the country’s most important social programs.” I just hope we don’t fall for it. There’s no fool like an old fool.

James Ridgeway writes for The Guardian newspaper, and is the senior Washington correspondent for Mother Jones magazine. 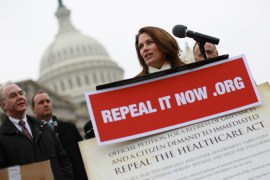 Bill calls for reversing of changes championed by the president, but repeal likely to be stopped in Senate. 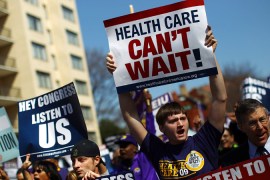 US healthcare: Profits before patients

What is the point of having the world’s best medical facilities if citizens don’t have the money to access healthcare?

Mass psychosis in the US