Speaking at the UN, President Jacob Zuma said he supported the Palestinian Authority’s bid for full membership of the UN for a state of Palestine; proposed by PA President Mahmoud Abbas on Friday September 23. After two decades of fruitless negotiations with Israel (while the latter continued building illegal settlements on Palestinian land, violently displacing Palestinians and stealing their resources), the PA turned its attention to getting international recognition within the UN .

Before commenting on South Africa’s position, it is necessary to look at the nature of the PA’s proposal and the circumstances leading up to it.

The United Nations partition plan in 1947 divided British Mandate Palestine into a “Jewish state” and an “Arab state”. At the time, the UN was not representative of world opinion. Most African states, for example, were still colonised and not members. Today, the UN Security Council continues this pattern of allowing a handful of countries to make decisions on behalf of the rest of the world.

Israel was established in May 1948, and within a few months it had taken over 78 per cent of what had been the British mandate of Palestine. Following the 1967 war, Israel occupied the other 22 per cent, which it still occupies. After the construction of illegal Israeli colonies and the virtual annexation of land within that 22 percent, Palestinians now have access to only 12 per cent of what was Mandate Palestine. These tiny bits of territory are further marred by an intricate matrix of Israeli control, imposed by an oppressive military regime that is currently in violation of scores of international humanitarian laws, and has committed numerous war crimes and crimes against humanity.

In the West Bank, Israel designed a web of bantustans physically cut off from each other by the illegal settlement infrastructure, and controlled by a brutal military. These are further constricted by depopulated military zones, an illegal apartheid wall stretching 810 kilometres, and more than 600 checkpoints prevent free Palestinian movement and normal functioning of the population.

Trade, economic activity, access to medical care and natural population growth are thus made impossible by the occupation. Furthermore, Israel also ensures it controls water located in Palestinian areas, charging Palestinians exorbitant amounts for the resource (while Israelis pay much less), and restricting Palestinian access to water to a fraction of what Israelis are allowed to use.

Abbas will ask the UN for 22 per cent of Mandate Palestine, a proposal that has already been vociferously opposed by Israel and the US, and supported by a number of countries such as South Africa. Yet the request is for something that mimics a state. The “state” that could be formed – if the US does not veto the proposal – will be a symbolic state. It will not have sovereignty over its territory, will not be able to guarantee the security of its people, will not have an independent economy, and will not have control over its natural resources, airspace or coast.

That is why a loud cacophony of voices from the global Palestine solidarity movement is echoing the position of the Palestinian Boycott, Divestment and Sanctions National Committee (BNC), which consists of more than 200 Palestinian civil society organisations.

They argue that none of Israel’s violations will change with a new UN declaration. Scores of UN resolutions over the past six decades, along with the Geneva Conventions and international law, have not succeeded in curbing Israel’s violent ethnic cleansing and state terrorism. Because of an absence of will by the international community to implement already existing international law, especially from the undemocratic UNSC, Israeli actions – including land theft, occupation, military rule, torture, extra-judicial assassinations, detentions, and a general violation of the human rights of Palestinians continue unabated. Of the more than 80 instances of the US using its veto, more than half were used to support Israel, despite its grave violations of international law.

The PA’s bid will not serve the interests of peace and security in the region. It is clear that most Israelis are interested, at most, in a Palestinian bantustan that will be completely beholden to, and dependent on, Israel – a “solution” which Palestinians will never accept.

Success for the PA’s bid will usurp the PLO’s position. And while the PLO itself is flagging, it remains the only Palestinian group with the capacity to unify and argue for the right to true Palestinian self determination.

South Africa has been cast into a situation where it has to choose between supporting a Palestinian proposal at the UN, or supporting the Israeli-US mafia which has been trying to intimidate states into opposing the Palestinian bid. For a country – and a ruling party – which have had good relations with the Palestinian people for decades, the question seems a no-brainer: the South African government simply cannot vote against the Palestinian request, as the president made clear. Furthermore, for a country that has consistently supported UN reform to also support – in an issue such as this – the veto of the US is unthinkable. However, it is crucial that the ANC and the government be more incisive in their analysis, and fully appreciate the nature of the proposal they will support.

The government has been unable to critically to assess the changing face of Palestinian politics. At the centre of this error is South Africa’s failure to acknowledge and engage with the multitude of Palestinian voices – political parties and civil society. By focusing solely on its relationship with the Palestinian Authority and Fatah, South Africa has boxed itself into a corner. This is especially the case, as Mahmoud Abbas continues attempts at behind-the-scenes negotiatiations with Israel, even trying to make a deal on Wednesday, September 21, so that he could withdraw the statehood request.

If the South African government genuinely intends to make good on its claim of support for the Palestinian people (rather than for one faction), then it must use this impasse as an opportunity for some introspection. It must refine its position and redefine the South African-Palestinian partnership.

How can the ANC, which fought hard against apartheid in South Africa, reconcile lending its support to the PA’s bantustan solution? Haven’t the Palestinians earned the right to “one person, one vote” in a unitary state in the same way that South Africans did?

The South African government should re-ignite its long-standing relationship with all components of the PLO, and help make that organisation – which is currently a shadow of its former self – a truly representative organ of the Palestinian people. While it might be too late to reconsider what its support of the statehood bid really means, the South African government must begin to address how it can concretely support the Palestinian struggle for justice and self-determination. Its role in this regard should be based on two pillars:

BDS will continue growing, whatever the outcomes at the UN. And it remains the movement most able to move beyond the impasse between Palestinians and Israelis and towards a just solution. What can be more compelling than employing the same strategy that led South Africa to victory over our form of apartheid?

Ultimately, these two contributions can ensure that South Africa makes a lasting and positive contribution to justice and peace in the Middle East.

Melissa Hoole is a South Africa-based spokesperson for the Palestine Solidarity Campaign. 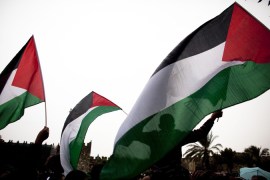 Boycotting Israel … from within

Israelis explain why they joined the Boycott Divestment Sanctions movement. 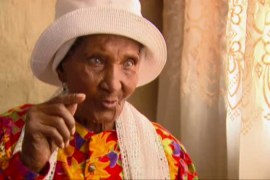 Mamai Moloso, 92, finds a home after witnessing some of South Africa’s most violent years. 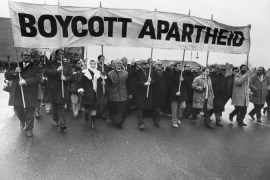 The crime of apartheid

In order to keep Israel a “Jewish” state, racist policies amounting to apartheid have been used against Palestinians.