Death has returned to the streets of Sanaa. On Sunday, a mass anti-government march was attacked by all manner of weaponry, with reports, and evidence, of pro-government forces using anti-aircraft guns and rocket-propelled grenades. Attacks continued on Monday, with anti-government protesters spreading the site of their sit-in, directly confronting government forces, at times even forcing them to flee. At the time of writing, at least 50 were confirmed dead over the two days, and many more are expected. The harrowing images have brought media attention back to Yemen.

Yemenis have been protesting peacefully for the fall of the regime since February, making this the longest-running of the “Arab Spring” protests. Massacres have been visited upon protesters before: Exactly six months ago the “Friday of Dignity” massacre saw 52 killed.

Yet Yemen has been largely absent from the international media agenda. The Western focus on the Arab world in recent months has been on Libya and Syria, with Yemen an unsexy brother in the background. Yemen has only garnered an article here and there when news of Yemeni President Saleh’s “imminent” return is leaked, or when anything al-Qaeda-related emerges.

Herein lies one of the major problems that Yemenis face in attempting to draw attention to their uprising. There is a fundamental lack of understanding of Yemen, and this has severely affected the media narrative.

For example, al-Qaeda. To Yemenis, this is a small and largely irrelevant group, seen as having links to the Yemeni government and largely aiding the government’s foreign policy goals. The easy capture of Zinjibar, the capital of Abyan province in southern Yemen, was evidence of this: Government forces mysteriously left the town before the arrival of largely unknown militants. In the West, however, the capture of Zinjibar by the al-Qaeda-affiliated Ansar al-Sharia group was a worrying image of what would happen to Yemen should Saleh’s regime fall – and many media outlets have fallen into the trap of labelling Yemen as a potential breeding ground for the next generation of al-Qaeda operatives.

The ease with which this narrative is picked up by the international media is partly due to the lack of English-speaking Yemen experts. On the edge of the Arab world, and surrounded by the much richer Gulf states, Yemen has often been forgotten. If there were more Yemen experts, we would not see the constant, and embarrassing, references to Saleh’s re-emergence in Yemen “within a week“, from reports often quoting “Yemeni officials”. Yemen experts would know that when Yemen’s own Comical Ali, Deputy Information Minister Abdo al-Janadi, says something, it should be ignored.

Yemen is too complicated for any nuanced analysis from observers who know little about the country. Too often terms such as “tribalism”, “extremism” and “failed state” are thrown around, when in reality Yemenis share the basic grievances that their fellow Arabs are protesting against.

Yemen is the poorest Arab country, when in truth it should not be. Corruption, that apparent Arab trait, is the main reason for the country’s poverty. Unemployment is stratospheric among Yemen’s booming, young population. Saudi Arabia is also leading the counter-revolutionary charge, as it has been doing in several restive Arab states. The shared narrative of the Arab Spring, that of freedom and dignity, is what drives the Yemeni protesters.

They are angry that they are being viewed as different. Too often Yemeni activists have asked why they are being ignored. The global Yemeni diaspora has mobilised and created the “Support Yemen“campaign, planning a global protest on September 24 against the international silence on Yemen.

Yemenis are in tune with the rest of the world, even going so far as to raise placards featuring Che Guevara and Gandhi, but they wonder why the rest of the world is not in tune with them. They deliberately carry banners in English denouncing terrorism, in the vain hope that someone outside Yemen will notice. It is a sobering thought to contemplate what will happen to this generation of Yemeni youth, who are asking for real democracy and rights, if they are rejected by the world.

Abubakr Al-Shamahi is a British-Yemeni freelance journalist and is the editor of Comment Middle East , a platform for young people to write about the region. 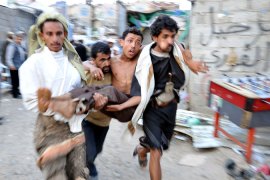 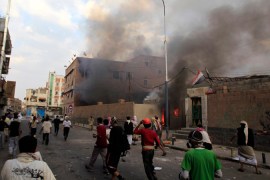 At least 21 killed in fresh violence in Sanaa, a day after dozens were shot dead by forces loyal to President Saleh. 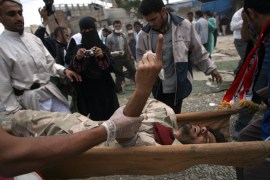 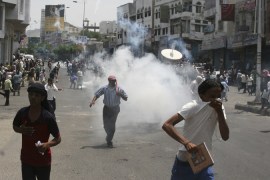 More killed in rocket attack, pushing the toll past 60 as clashes between ex-soldiers and pro-Saleh forces continue.