One afternoon last year, as I was driving through Adliya in the northeastern corner of the island of Bahrain and was surprised to find a man begging on the side of the street.

Adliya is a nice part of Bahrain – a Western part. Not far from the street I was on was the British Club and a shiny host of high-rise apartments of the sort ex-pats of all stripes live in. I had never seen a beggar in Bahrain, and I certainly wouldn’t have expected one to find his way to Adliya.

Driving up a bit further, I noticed he wasn’t alone. In the grassy median between the two sides of the boulevard, he had set up a small red tent and surrounded it with a few white cardboard signs with imperfect English written all over them.

He was a clever man for setting up this one-family protest. Drivers on this boulevard could see his children who should have been in school on this weekday. His wife was carrying a baby as she stood in the tent’s doorway. Boxes of household items, and even a few appliances were scattered around their tent and on the grassy median.

He wasn’t even the very poor kind of Shia I had seen from time to time when, during their annual December 16th protests of Bahrain National Day, some of them would make their way into the ex-pat parts of the island, near the fancy malls, and light a bonfire in the major highway. I once saw a bathtub ablaze in the middle of Manama highway.

I stopped to take a few pictures with my cell phone camera, but was honked at by the other drivers – no one else seemed to be bothered by this tragedy in front of our eyes. I drove by and then made a U-turn to go back and see again. I U-turned three times before I had to go to move on.

For decades, international news has refused to shine a light on the realities of Bahrain’s primary domestic conflict: colonialism. Instead, headline after headline portrays Bahrain’s problems as a sectarian divide. It’s the Shia versus the Sunnis in every news item – Saudia Arabia versus Iran.

But that is simply not what is happening on the ground in Bahrain, a geostrategically important island nation right in the middle of the Persian Gulf where the largest base for the US Navy exists, outside of the US itself.

Bahrain, like so many other countries in the region and in the world, is just another victim of British mapmaking, American business interests and the seedy intersection of these forces. For centuries, the British have supported the Al Khalifa Sunni tribe – a family originating in the Saudi peninsula – as rulers of Bahrain, inserting themselves into any possibility of the Al Khalifa family aligning itself with Iran, or with the interests of the Bahraini people over and above the interests of business and power.

Because of the close relationship between the Bahraini people and Iran, the encouragement of sectarian divisions has been a primary tool for sustaining a power structure that is favourable to Western corporate and strategic interests.

Little hints in daily Bahraini life belie the essential failure of this approach and the deep resentments it has germinated, however. Just attend a soccer match in Bahrain between Bahrain and Iran and you’ll find a noticeable imbalance of cheers and support for the Iranian side. The native population is full of Ajam (ethnic Iranians of Shia and Sunni faiths who still speak Farsi or a creole of Farsi and Arabic in their homes), Howala (people who migrated to Iran, then returned to Bahrain – many of whom are ethnically Iranian, as well, and therefore also speak Farsi or a Farsi creole), and Baharna (Arab Shia who naturally have an affinity for Shia Iran).

The Al Khalifa family’s Saudi roots are never forgotten in a region of the world where tribal ancestry has religious significance. The fact that the Al-Khalifas have now openly used Saudi troops against the Bahraini protesters proves that they, too, have not forgotten.

For generations, the Al-Khalifa government has made it a priority to prevent large segments of the Bahraini population from having a say in their government and their military, proving that the Al-Khalifa colonial implant has been serving its purpose to a tee. Native Bahrainis of Iranian ancestry or who are Shia are prohibited from serving in the government – with the exception of a few benign ministries – and from serving in the military and security forces. They also face discrimination in education and employment opportunities – all this in a country where they are in fact the majority.

Further, it is well known that large numbers of Pakistani Sunnis of Baluchi descent are imported into the country, automatically given citizenship and installed in the military and security forces. They are given cushy jobs and houses to live in – always bypassing the queue of native Bahrainis who wait decades to be given houses by the government. Sunnis from other countries, as well, have priority in Bahrain. Syrian imports, in particular, are on the rise.

They, too, get priority over Bahrainis who patiently and desperately waited decades for housing and employment opportunities that they must line up for, only to see foreigners being handed them upon arrival.

The policies against Shia take ludicrous turns that many a Bahraini can tell you about. My grandmother was once refused a transit visa to Bahrain – no doubt because she is Iranian. More than one friend has either been refused a visit visa or had exceptional delays to being granted one, because the name on their passport was mistakenly taken to mean that they are Shia. On separate occasions, two Sunni Pakistani friends had to explain their religious background to immigration authorities just to get visit visas – their names seemed typically Shia, but they happened to be Sunni.

Amongst the Bahraini population, these issues are particularly troubling because despite what you may hear in the media, Bahrainis of both religious backgrounds intermarry quite normally. Even the deeper distinctions of a family’s ancestry do not prevent young Bahrainis in particular from intermarrying, especially in the middle and upper middle economic classes.

As American bullets fire from the weapons of foreign security forces appropriated by foreign rulers onto Bahraini bodies, the grim reality of 21st-century colonial vestiges and imperialist policies could hardly be clearer. As the bulk of the island struggles with discrimination for being Shia or Sunni or both, Bahrain’s entire southern tip is a US military base where frightened young Alabamans and Iowans pace through the streets to eat at Chili’s or grab a burger from Fuddruckers. They too, are pawns in a game that has no benefits for ordinary people.

The so-called sectarian divide of Bahrain is a manipulative simplification of a far greater divide: that of the colonially-installed government that has no connection with or compassion for the people of Bahrain. The Saudis are there to preserve Anglo-American power as they do in Saudi Arabia. They are Sunni. The people they rule over are primarily Shia.

These are the kinds of tensions the British specialized in and the Americans are taking advantage of in so many parts of the world. It’s an insidious approach to world affairs. Coupled with nonstop mainstream media portrayals of sectarian divides amongst the population, it has been a successful model for damaging the locals, their reputation, and their chances of getting the help they actually need.

It leaves entire families homeless, using nothing but their power of protest and their determination, to get their voices heard.

Shirin Sadeghi is a Middle East specialist with an emphasis on Iran, Pakistan and the Gulf countries. She is the host of New America Now  on KALW 91.7 FM San Francisco and is also a columnist for Pakistan Today, Pakistan’s national daily newspaper. Follow Shirin Sadeghi on Twitter: @ShirinSadeghi 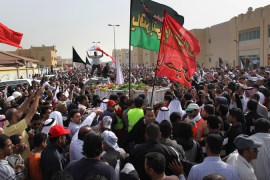 Bahrain’s contribution to the Arab Spring

The Bahraini government used the spectre of sectarian violence to justify their crackdown on peaceful protesters.