Bill was a legal whiz who knew the ins and outs of voting law and insisted that every obscure provision be applied, no matter what. He even made those who spoke accented English interpret parts of the constitution to prove that they understood it. The lines were long, people fought, got tired or had to go to work, and many of them left without voting. It was a notorious episode long remembered in Phoenix political circles.

It turned out that it was part of a Republican Party strategy known as “Operation Eagle Eye”, and “Bill” was future Supreme Court Justice William Rehnquist. He was confronted with his intimidation tactics in his confirmation hearings years later, and characterised his behaviour as simple arbitration of polling place disputes. In doing so, he set a standard for GOP dishonesty and obfuscation surrounding voting rights that continues to this day.

This week, in one of its greatest acts of elective chutzpah yet, Republicans in the state of Pennsylvania set forth a plan to split the state’s electoral votes for president proportionally by congressional district. This is not illegal, or even unprecedented. Two other states have this system. And some people have been arguing for years that the whole country should abolish the Electoral College altogether in order to avoid such undemocratic messes as the 2000 election. Many of them have settled on the idea of all states simultaneously adopting the system of alloting electoral votes proportionally instead of winner-take-all as a sort of compromise.

But that’s not what’s happening here.

Suffice to say that the Republican move in Pennsylvania is not motivated by the idea of a more democratic method of electing presidents. Instead, it’s a cynical manoeuver to take advantage of redistricting to ensure that a state Obama will likely win will no longer be in play in the 2012 election. Nobody has ever had the nerve to do that before. Indeed, changing something so fundamental to our federal election system for craven short-term gain would have been unthinkable in the past. Not anymore.

As it happens, there has been pushback from Pennsylvania’s Republican members of congress, and as a result, the plan is unlikely to pass. It turns out that even though the plan might be helpful to the Republican presidential candidate, it could end up hurting Republican congressional candidates, because Democrats would be able to move resources to challenge them in their districts. But it’s notable that the idea that it would be injurious to our democratic system to go about changing the rules to suit the partisan configuration of the moment hasn’t been mentioned. This is all self-serving political expediency. Principles have nothing to do with it.

Voter intimidation and vote suppression had long been a part of Democratic politics in the South, in places where African-Americans had been granted an illusory right to vote. But as the South made its dramatic shift to the Republican Party in the wake of the Civil Rights Act, and as African-American voters in the North then shifted to the Democrats, the Republicans began to dominate the process and thus began the decades-long GOP project to suppress the vote. Along the way it has developed into a full-blown operation to undermine democracy in general, at whatever choke points are available.

According to a comprehensive report by the Center for Voting Rights in 2004, in the wake of Jesse Jackson’s successful mobilisation of black voters in the 1980s, the GOP power elite recognised that it could no longer rely on volunteers and crude local efforts, which were running afoul of the Voting Rights Act and ending up in front of judges. So a group of former lawyers in the Reagan administration created the Republican National Lawyers Association, which was characterised at the time as a sort of “Rotary Club for GOP Stalwarts” (and which also happened to provide continuing legal education credits). It became a combination of a professional bar association, a political law firm, an educational institute and an old boy network for Republican lawyers, many of whom concentrated their work for the group specifically on how to use voting laws for their partisan advantage.

They made their bones in the Florida recount in 2000. Here was a situation in which a national group of lawyers steeped in election law could be brought to bear on a situation in which the interpretation of the rules were being written on the fly, and they did their jobs well. The 2000 presidential election marked a new chapter in Republican vote suppression, and signalled a new willingness to subvert the workings of democracy by any means necessary. And it wasn’t surprising that Supreme Court Chief Justice William Rehnquist once more put his thumb on the scale. It may be his most enduring legacy.

What followed during the Bush years was a wholesale abandonment of rules and norms that had been established for decades. In a break with long-standing tradition, House majority whip Tom Delay oversaw a re-gerrymandering of Texas after the 2002 election, which gave the Republicans a greater edge in Congress.

The Bush Department of Justice more or less closed down the civil rights division, which had monitored compliance with the Voting Rights Act. It even concocted an illegal scheme to replace US Attorneys who refused to flout laws and Department of Justice rules against interfering in elections.

The federal courts, which had been packed with GOP judges for decades, began to rule in favor of “Voter ID” laws on the basis of claims of systemic voter fraud for which there was no documented evidence. More states found reasons to deny the vote to people convicted of breaking the law, even after they had paid their debt to society. “ACORN” became a euphemism for inner-city voter fraud.

Little by little, it became more and more difficult to exercise for people of colour, immigrants, the elderly and the poor to exercise their franchise. The resultant red tape and bureaucratic delays have made it more difficult for working people to vote as well. It’s hard to believe that it could get any worse than that, but it has.

It shouldn’t have come as any surprise that the historic election of the first black president, thanks in part to an influx of new voters, would revive the panic Republicans had felt at the prospect of Jesse Jackson’s Rainbow Coalition successfully mobilising Democratic voters more than 20 years before. And as before, it resulted in an energised effort to subvert democracy.

Rolling Stone contributor Ari Berman has documented an assault on voting rights since the 2008 elction that makes the previous eight years look like child’s play. Since then, 38 states have introduced legislation designed to make voting more difficult, if not impossible, for American citizens. Berman documents efforts across the country to impede registration, cut short early voting, repeal same-day registration, and more.

Berman reports that this was all centrally coordinated by yet another Republican organisation, the American Legislative Exchange Council, funded in large part by billionaire Tea Party activists David and Charles Koch. The piecemeal approach used by anti-abortion activists to make it extremely difficult for women to exercise their right to abortion is now being used by anti-democracy activists to make it extremely difficult for poor people to vote.

In the United States, there has always been tension about the franchise, going all the way back to the beginning of the Republic. Aristocrats were afraid of it for the simple reason that it would mean the government might have to represent and defend people whose interests interfere with their own interests: to maintain their wealth and pass it down to their heirs.

Whenever you give the vote to poor people and others who need government’s protections against the predations of privilege, you are endangering that arrangement – and the privileged fight back. Conservatives are traditionally their soldiers in that battle.

But over time, the United States progressed to the point where people began to believe strongly that every American has a fundamental right to vote (in spite of Supreme Court Justice Antonin Scalia’s insistence that no such thing exists). Extending the franchise to every American citizen (subject, of course, to the vagaries of residence and criminal status) was one of the great American democratic accomplishments of the 20th century.

Unfortunately, for every two steps forward we apparently must take a step back, and conservatives have been able to leverage racial resentment and a sort of perverted populism to help their wealthy benefactors keep their money.

One certainly hopes for their sake that the GOP grassroots voters never figure out how they’ve been played in this game, or the modern aristocrats may find themselves without anyone left to vote for their interests. Unfortunately, by that time it may be too late for the people. The system may be rigged so thoroughly that even the Tea Partiers will find it hard to cast a vote in protest.

Hubert Humphrey famously said, “It is not enough to merely defend democracy. To defend it may be to lose it; to extend it is to strengthen it. Democracy is not property; it is an idea”. If that is true, it’s an idea that has become nothing but an inconvenient abstraction to the Republican side of the aisle. Extending democracy is beyond our wildest dreams at the moment, as conservatives work overtime to make it harder for average citizens to vote, instead of easier. Defending democracy is the only option we have.

Heather Digby Parton writes the liberal political blog Hullabaloo. You can follow the blog at http://digbysblog.blogspot.com. 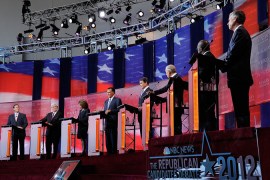 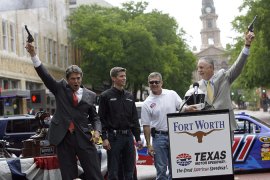 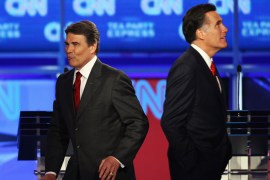 Republican Party’s base: A gallery of ghouls

Audience outbursts at recent Republican Party debates reveal the often vicious sentiments of the party’s base. 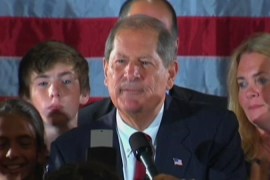 The self-hating 99 per cent