With disastrous volcanic eruptions, earthquakes, and extreme storms, El Salvador is widely regarded as one of the world’s most vulnerable countries to natural disasters. With the effects of climate change complicating social and economic crises, the El Salvadorian government has recognised that national security considerations must include discussion of environmental factors, leading to the Minister of the Environment Herman Chavez to proclaim Climate Change as “our number-one priority” in February 2011.

However, as Salvadorians well know, when it comes to natural disasters, some things are simply out of their control. The demise of the country’s mangrove forests is one of these things.

El Salvador’s Pacific Mangrove forest, the largest of its kind in Central America, covers over 20,000 hectares in and around the Jiquilisco Bay. Mangroves are traditionally considered to be a natural protection from extreme flooding and rising tides, acting as an invaluable buffer zone during extreme weather events.

Several years ago, however, local communities began noticing a strange phenomenon: The mangroves at the edge of the ocean were dying.

The mangrove forest is a unique ecosystem found in tropical and sub-tropical coastal regions in the Americas, Middle East, Asia and Oceania. Often found where fresh water and salt water mix, the mangrove creates specific ecological conditions that support a wide variety of flora and fauna.

The trees have a series of stilt-like supports that extend from the trunk for increased stability and resilience. The mangrove trees have evolved to be able to withstand change in water level caused by normally occurring tidal cycles and mild flooding, helping protect coastal areas from damage from extreme storms and tsunamis. In recent years, however, a rise in sea level has brought the ocean waves intruding further inland than ever before, wreaking havoc on the trees and the entire ecosystem.

According to Dr Ricardo Navarro, director of the Centre for Appropriate Technologies in El Salvador (CESTA), over 30 metres of mangrove forest has been completely destroyed by this phenomenon in the last six years. “With the increase in global sea level, the ocean waves are entering further and further into the mangroves. What happens is the waves wash away the soil nutrients, leaving the trees in pure sand. So the trees die, and then all of the animals leave the area.”

All along the central coast of El Salvador there is a dead zone stretching along the beach, measuring between 10 and 50 metres. The cause? Climate change, says Dr Navarro.

The Intergovernmental Panel on Climate Change reported that global sea level rose 21 centimetres in the last century. This rise is reportedly caused by a combination of glacial melting, melting of the polar caps, and the physical expansion of the oceans with a rise in water temperature, all thought to be consequences of human-caused global warming.

When asked how far the tide has come in, local fisherman Adan Nahun Diaz Ramirez pointed out into the sea, past the breaking waves. “The forest extended past all of this, you can see,” he said, pointing to mangrove stumps underneath the crashing waves. “Actually, beyond the mangroves, there was a layer of other trees on the beach.”

With no soil structure and no life left, the newly exposed land has no protection from the ocean, which over time is encroaching further inland. Locals estimate that at least 50 metres of land has been lost to the ocean in the last ten years.

La Tirana is a small village of 23 families at the edge of the mangrove. The village was populated through most of the 20th century, but abandoned during El Salvador’s civil war, when most rural areas of the country were abandoned. The town came back to life 10 years ago, when new residents moved in.

CESTA has been working in La Tirana since 2005 to develop a programme called “Sustainable Ways of Life”. The programme has provided the community an environmental education programme, technical assistance for organic agriculture, installed water wells, and several solar panels to bring electricity to the village for the first time. The programme also facilitated the creation of a vision for the villages’ ecological and economic sustainability.

“Now we have a plan for sustainable harvesting of the punche [a local species of mangrove crab], which limits our harvest to five to seven dozen per day,” Ramirez told me. “But there are days when we can’t even find one dozen”.

Like many other rural communities, harvesting the punche is the only source of income. “The Earth here is not easy to cultivate, because it’s just sand, so we depend on the mangrove,” Ramirez said. “In the last few years, it’s been increasingly difficult to hunt the punche, and we have no other way to support our community.”

Just a few kilometres from La Tirana, in the mouth of the Lempa river, surrounded by mangroves, there used to be a sand island.

The year-round island was observed to be the seasonal home to a colony of American Skimmer birds, the only habitat of its kind observed in Central America. With the rising tide, the island has almost disappeared, now only appearing during low tide. Without a safe place to rest, the Skimmer hasn’t been seen in the area in several years.

“This is clearly an effect of global climate change,” claims Dr Navarro. “And the worst part of it is that there’s nothing we can do to protect these mangroves and these species of fauna. We as a global community have to take action to stop global warming. The international agreements being discussed today would still allow an increase of up to five degrees centigrade through the end of this century. This degree of change would have disastrous effects around the world. What we are seeing here is only the beginning.”

Throughout the 70s and 80s, waves of Salvadorian refugees fled the country’s violent civil war. In the past decades, immigration has continued, as citizens look to escape extreme poverty and a series of natural disasters, including magnitude 7.7 and 6.7 earthquakes in 2001, and Tropical Storm Agatha in 2010. Extreme storms are becoming more common and more intense, leading to extreme flooding throughout the country and particularly in the central coast area.

“If things keep going like this, the next wave of immigrants from El Salvador will be climate refugees,” says Dr Navarro.

International organisations ranging from the IPCC to UNESCO are estimating that 10 to 50 million refugees will flee their homes in the first half of the 21st century because of climate change-related disasters.

Community members of La Tirana all agree that things are getting worse each year, and that the ocean is moving inland faster. If this continues, they may join the millions of refugees fleeing the effects of climate change, and El Salvador’s environmental and social condition will get a little more complicated.

Native to Oakland, California, Ryan Luckey is a writer, musician, and film producer. Ryan is co-founder of the Comun Tierra Project, which documents ecological projects in Latin America.

The views expressed in the article are the author’s own and do not necessarily represent Al Jazeera’s editorial policy. 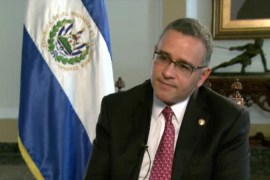