Two years from now the staffs of Vanity Fair and the New Yorker will move into the most haunted building in the world.  There, the elite of American celebrity photographers, gossip columnists, and magazine journalists may meet some macabre new muses.

Aloft in the upper stories of 1 World Trade Center (where Condé Nast publishing has signed the biggest lease), they will gaze out their windows at that ghostly void, just a few yards away, where 658 doomed employees of Cantor Fitzgerald were sitting at their desks at 8:46 AM, September 11, 2001.

Not to worry: The “Freedom Tower” – the boosters reassure us – will be an enduring consolation to the families of 9/11’s martyrs as well as an icon of civic and national renaissance. Not to mention its dramatic resurrection of property values in the neighbourhood.  (I confess that I find this conflation of real-estate speculation with sublime memorial unnerving: like proposing to build a yacht marina over the sunken Arizona or a Katrina theme park in the Lower Ninth Ward.)

One World Trade Center, in the original design, was also meant to restore vertical architectural supremacy to Manhattan and to be the tallest building in the world.  This global phallic rivalry was won instead by Dubai’s Burj Khalifa super-tower, completed last year and twice as high as the Empire State Building.

In a few years Dubai, however, will have to surrender the gold cup to Saudi Arabia and the bin Laden family.

Financed by Prince Al-Waleed bin Talal, who revels in being known as the “Arabian Warren Buffet,” the planned Kingdom Tower in Jeddah — the ultimate hyperbole for Saudi despotism — will pierce the clouds along the Red Sea coastline at an incredible altitude of one full kilometre (3,281 feet).

One World Trade Center, on the other hand, will max out at 1,776 feet above the Hudson.  (Conspiracy theorists can obsess over this coincidence: the number of feet higher the Saudi Arabian tower will be than the American one almost exactly equals the number of people who died in the North Tower of the WTC in 2001.)

With little publicity, the initial billion-dollar contract for the Jeddah spire was awarded by Prince Al-Waleed to the Arab world’s mega-builders and skyscraper experts — the Bin Laden Group.  It may keep their family name alive for centuries to come.

Ten years ago, lower Manhattan became the Sarajevo of the War on Terrorism.  Although conscience recoils against making any moral equation between the assassination of a single Archduke and his wife on June 28, 1914, and the slaughter of almost 3,000 New Yorkers, the analogy otherwise is eerily apt.

In both cases, a small network of peripheral but well-connected conspirators, ennobled in their own eyes by the bitter grievances of their region, attacked a major symbol of the responsible empire.  The outrages were deliberately aimed to detonate larger, cataclysmic conflicts, and in this respect, were successful beyond the darkest imagining of the plotters.

However, the magnitudes of the resulting geopolitical explosions were not simple functions of the notoriety of the acts themselves.  For example, in Europe between 1890 and 1940, more than two dozen heads of state were assassinated, including the kings of Italy, Greece, Yugoslavia, and Bulgaria, an empress of Austria, three Spanish prime ministers, two presidents of France, and so on. But apart from the murder of Franz Ferdinand and his wife in Sarajevo, none of these events instigated a war.

Likewise, a single suicide bomber in a truck killed 241 US Marines and sailors at their barracks at the Beirut Airport in 1983.  (58 French paratroopers were killed by another suicide bomber the same day.)  A Democratic president almost certainly would have been pressured into massive retaliation or full-scale intervention in the Lebanese civil war, but President Reagan – very shrewdly – distracted the public with an invasion of tiny Grenada, while quietly withdrawing the rest of his Marines from the Eastern Mediterranean.

If Sarajevo and the World Trade Center, in contrast, unleashed global carnage and chaos, it was because a de facto collusion existed between the attackers and the attacked.  I’m not referring to mythical British plots in the Balkans or Mossad agents blowing up the Twin Towers, but simply to well-known facts: by 1912, the Imperial German General Staff had already decided to exploit the first opportunity to make war, and powerful neocons around George W. Bush were lobbying for the overthrow of the regimes in Baghdad and Tehran even before the last hanging chad had been counted in Florida in 2000.

Both the Hohenzollerns and the Texans were in search of a casus belli that would legitimate military intervention and silence domestic opposition.

Prussian militarism, of course, was punctually accommodated by the Black Hand – a terrorist group sponsored by the Serbian general staff — that assassinated the Archduke and his wife, while al-Qaeda’s horror show in lower Manhattan consecrated the divine right of the White House to torture, secretly imprison, and kill by remote control.

At the time, it seemed almost as if Bush and Cheney had staged a coup d’état against the Constitution.  Yet they could cynically but accurately point to a whole catalogue of precedents.

To put it bluntly, every single chapter in the history of the extension of US power has opened with the same sentence: “Innocent Americans were treacherously attacked…”

In addition, historians will also recall the besieged legation in Peking (1899), Emilio Aguinaldo’s alleged perfidy outside Manila (1899), various crimes against American banks and businessmen in Central America and the Caribbean (1900-1930), the Japanese bombing of the USS Panay in 1938, the Chinese army’s crossing of the Yalu River into Korea (1950), the Gulf of Tonkin incident in Vietnam (1964), the North Korean capture of the Pueblo (1968), the Cambodian seisure of the Mayaguez (1975), the U.S. Embassy hostages in Tehran (1979), the imperiled medical students in Grenada (1983), the harassed American soldiers in Panama (1989), and so on.

This list barely scratches the surface: the synchronisation of self-pity and intervention in US history is relentless.

In the name of “innocent Americans,” the United States annexed Hawaii and Puerto Rico; colonised the Philippines; punished nationalism in North Africa and China; invaded Mexico (twice); sent a generation to the killing fields of France (and imprisoned dissenters at home); massacred patriots in Haiti, the Dominican Republic, and Nicaragua; annihilated Japanese cities; bombed Korea and Indochina into rubble; buttressed military dictatorships in Latin America; and became Israel’s partner in the routine murder of Arab civilians.

Someday – perhaps sooner than we think – a new Edward Gibbon in China or India will surely sit down to write The History of the Decline and Fall of the American Empire.  Hopefully it will be but one volume in a larger, more progressive oeuvre – The Renaissance of Asia perhaps – and not an obituary for a human future sucked into America’s grasping void.

I think she’ll probably classify self-righteous American “innocence” as one of the most toxic tributaries of national decline, with President Obama as its highest incarnation.  Indeed, from the perspective of the future, which will be deemed the greater crime: to have created the Guantanamo nightmare in the first place, or to have preserved it in contempt of global popular opinion and one’s own campaign promises?

Obama, who was elected to bring the troops home, close the gulags, and restore the Bill of Rights, has in fact become the chief curator of the Bush legacy: a born-again convert to special ops, killer drones, immense intelligence budgets, Orwellian surveillance technology, secret jails, and the superhero cult of former general, now CIA Director David Petraeus.

Our “antiwar” president, in fact, may be taking US power deeper into the darkness than any of us dare to imagine.  And the more fervently Obama embraces his role as commander in chief of the Delta Force and Navy Seals, the less likely it becomes that future Democrats will dare to reform the Patriot Act or challenge the presidential prerogative to murder and incarcerate America’s enemies in secret.

Enmired in wars with phantoms, Washington has been blindsided by every major trend of the last decade.  It completely misread the real yearnings of the Arab street and the significance of mainstream Islamic populism, ignored the emergence of Turkey and Brazil as independent powers, forgot Africa, and lost much of its leverage with Germany as well as with Israel’s increasingly arrogant reactionaries.  Most importantly, Washington has failed to develop any coherent policy framework for its relationship with China, its main creditor and most important rival.

From a Chinese standpoint (assumedly the perspective of our future Ms. Gibbon), the United States is showing incipient symptoms of being a failed state.  When Xinhua, the semi-official Chinese news agency, scolds the US Congress for being “dangerously irresponsible” in debt negotiations, or when senior Chinese leaders openly worry about the stability of American political and economic institutions, the shoe is truly on the other foot.  Especially when standing in the wings, bibles in hand, are the mad spawn of 9/11 – the Republican presidential candidates.

Mike Davis teaches in the Creative Writing Program at the University of California, Riverside.  He is the author of Planet of Slums, among many other works.  He’s currently writing a book about employment, global warming, and urban reconstruction for Metropolitan Books.

A version of this article appeared previously on Tom Dispatch 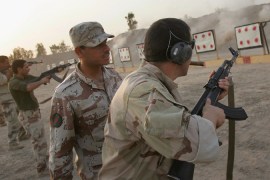