Yemen finds itself in the fifth month of mass anti-government protests that have left the country with a severely injured President seeking treatment abroad, an economic and humanitarian disaster, and a seemingly intractable stalemate. The youth, who comprise the vast majority of a population whose average age is 18, are increasingly divided, yet increasingly adamant that all the corrupt remnants of the old regime should be replaced by a fully-functioning democratic system.

This wish, in line with the aspirations of millions of Arabs inspired by the events of the “Arab Spring”, may appear to be idealistic and even naïve in a country like Yemen. Poor education levels, the lack of an established middle class, the prevalence of qat, and, perhaps most importantly, various armed uprisings, secessionists, and militant activity, are seen as roadblocks preventing any realistic democratic enterprise. However, the events of the past few months have given hope that a new, more democratic, Yemen might emerge out of the ashes of the current crisis.

There is no denying that the current anti-government movement is supported by the majority of the Yemeni people, especially in the restive areas of Taiz, Aden, Saada, Ibb, and Hodeida. Even in the capital Sanaa, where pro-Saleh sentiment is seen as strongest, the biggest and most regular rallies have been those calling for his removal from power.

The anti-government protest movement encompasses a wide cross-section of Yemeni society, centred around a student-based youth movement, and growing to encompass various civil society groups, the traditional opposition parties, women’s groups, and a significant tribal element. The cultural change that may bring hope for the future of the country can be seen in the seemingly uniform calls for a pluralist state by the protesters, and the conferences, town hall style meetings, and even poetry nights that are held at the protest squares around the country.

Nonetheless Yemen, in keeping with its history, is different. Yemenis have not had their “resignation moment”, as Egyptians and Tunisians did, and yet they have a President who has left the country, unlikely to return. Ali Abdullah Saleh’s son, Ahmed, has taken his father’s role in the palace, without officially taking over, nor having the power to. Vice-President Abdu Rabbo Mansur Hadi, whom the constitution designates as acting President in light of Saleh’s absence, is seemingly powerless, and torn between the various sides who all want to influence him. Some revolutionary groups have set up transitional councils, yet the details are shady. State media, usually a good indicator of the control of an authoritarian government, remains the official mouthpiece of the Saleh regime, and still labelling protesters as criminals and mobs.

One of the main reasons that the regime has carried on without Ali Abdullah Saleh is that his sons and nephews, especially his son Ahmed and his nephew Yahya, have effectively been running the show for the past few years. This period has seen the President replace his old advisors with these family members, and the accompanying period of instability in the country can be seen as evidence of this transfer of power. Although the figurehead is no longer in the country, the Salehs have been busy building on their established military and security power bases to consolidate power for themselves.

The traditional outlook on current events in Yemen has gathered around two issues, an internal power struggle in the Yemeni elite, and the role of outside powers in the unrest.

The power struggle narrative focuses on the various factions of the elite that are now apparently fighting for power. President Saleh finds his old friend, General Ali Muhsen, on the side of the protesters as their main defender. This Saleh-Muhsen rivalry is seen as a battle within the various families of the Sanhan tribe, a part of the wider Hashid tribal confederation. The leaders of Hashid, the al-Ahmar family, provide another element, with the al-Ahmar brothers, led by the tribal Sheikh Sadiq and the most politically active brother Hamid, allied with General Ali Muhsen.

Fear of a strong Yemen

Then come the two states with the biggest influence in Yemen, Saudi Arabia and the US. Saudi Arabia has two goals in Yemen: to try to retain its influence in the country, and to bring about a stable Yemen without letting Yemen get too strong. Here we can refer to the alleged deathbed advice of King Abdulaziz: “Keep Yemen weak”. While this may not have happened, Saudi policy in the country certainly bears it out. Support for the royalists in the civil war in the 1960s, and for secessionists in the civil war of 1994, are two examples.

The youth movement therefore presents a serious problem for Saudi policy in Yemen. The movement has goals that are the antithesis of the way Saudi Arabia is run. Should the movement succeed in bringing about a civil, democratic state in Yemen, this would present a dangerous model in the eyes of the ruling al-Saud. The youth movement also appears to not have been co-opted by Saudi Arabia yet, which puts the country in the strange position of having a powerful grouping in Yemen not under its sway.

Should the youth movement succeed, there is no doubt that there would be a move away from Saudi Arabia, and an attempt to bring about an independent foreign policy. Yemen, the most populous country on the Arabian peninsula, could become a relatively strong, democratic country, in the long term. This would no doubt upset the balance of power in the region.

However, Saudi Arabia and the rest of the GCC states need not worry so much. A stable Yemen certainly means a much more stable wider region. The perceived main threat for the Gulf, apart from Iran, is al-Qaeda in the Arabian Peninsula (AQAP). In allowing the Yemeni revolution to be successful, and giving glimmers of hope to a democracy advancing in the country, the Gulf would be severely weakening AQAP and its legitimacy. AQAP currently gathers its main support from disaffected tribes who feel that the central government has mistreated them. Should the Yemeni government act in a more even-handed way with these disaffected people, then it is obvious that support for AQAP would wither.

A Yemen without the endemic corruption that the country suffers from today would also have a good chance of advancing its economy. Yemen is not poor in resources: the widely-held assumption that its oil reserves will run out in 2017 was made on the basis of an inherently corrupt bidding process that did not document several new oilfields. Apart from oil and gas, the country’s waters are rich in fish, the climate is good for agriculture, and the country’s manufacturing and tourism industries both have strong potential.

This does not mean that Saudi Arabia and the rest of the GCC would not be needed after any potential revolution. Although most Yemenis would welcome the end of the practice of payments to the leading powers in Yemen, many of whom are corrupt, they would also welcome help with the reconstruction of the country. Many leaders of the youth movement are starting to develop a pragmatic outlook, and know that they will need the help of the Gulf to reconstruct the country, especially following the devastating effect the last few months have had on the Yemeni economy.

Qatar is the country most trusted by the youth of Yemen, following its support for the youth movement, and therefore they would gain the most from the emergence of a democratic Yemen. Qatar would emerge as Yemen’s number-one ally in the Gulf region. However, Yemen would not reject Saudi Arabia’s money at this time of need, and so Saudi fear of a total loss of influence in what it has historically seen as its backyard is premature.

The other outside power with major interests in Yemen is the United States of America. When dealing with Yemen, the Americans usually perceive everything through the lens of terrorism and al-Qaeda. President Saleh has successfully convinced the Americans of the al-Qaeda threat in the country, and has thereby been able to get much in the way of weaponry, equipment, and training from the Americans. This has then often been used against non-Qaeda problems in the country, such as the Houthi rebels in the northern Saada province.

The Americans now privately accept the fact that the issue of AQAP has been overblown by the Yemeni government, and that it was a useful tool for Saleh to garner support from the US. This explains the less-than-supportive US statements issued in recent months about Saleh and a transition to democracy. However, there still appears to be some hesitation in calling for Saleh to step down immediately. The American support for the GCC proposal, which only calls for Saleh to step down in 30 days, is increasingly bizarre, with him currently out of the country, his sons controlling many government institutions, a growing economic and humanitarian disaster, and attacks against protesters and individual activists continuing.

This can only be described as the result of the remnants of the old policies on Yemen refusing to go away. The old fear of abandoning the country to al-Qaeda has meant that Saleh’s threats are partly believed, despite the protest movement’s full opposition to al-Qaeda ideology. A democracy in Yemen would be a coup for the US, and would give the argument for democracy in the Arab and Muslim world a strong push, especially after the Iraq debacle. Rescuing the Yemeni economy would also severely limit support for AQAP and extremist ideology in general.

The youth movement presents the perfect opportunity for the US and its Western allies to change the course of Yemen, from an apparent failed state housing its own franchise of al-Qaeda to a relatively prosperous democratic state.

However, this will not happen without Western support for the youth movement. The youth movement does not have any power in Yemen apart from its numbers and its continued ability to bring the country to a standstill, and therefore needs overt Western support. The flying of French and British flags in Benghazi is something that would have been outlandish a year ago, and its occurrence in the past few months shows the changes in local attitudes that can come as a result of positive Western policy in the region.

Yemen is currently in dire straits. The youth movement present a positive future for the country, although its members are increasingly fractured, and seemingly sidelined by all the major players. Although risky, a bet on the youth movement would present the best chances for a positive outcome for the outside region, not just for the GCC and the wider Arab world, but also for the US and the West.

Taking a chance on a democratic Yemen would severely reduce the capabilities of the number-one Western fear, AQAP, and a stronger, democratic Yemeni state would set an encouraging precedent for other states in the region. It might even help in the fight against piracy in the Arabian Sea. Old habits die hard, but this is a moment where outside powers must take a risk in Yemen. Otherwise, the future does not bode well for the country or the region.

Abubakr Al-Shamahi is a British-Yemeni freelance journalist and is the editor of Comment Middle East commentmideast.com, a platform for young people to write about the region. 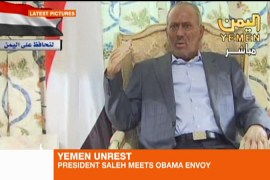 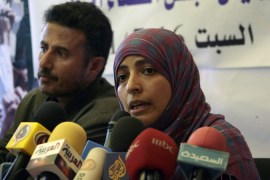 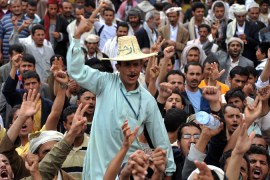 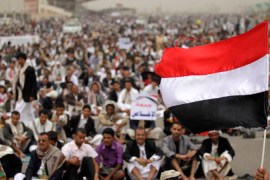 Thousands protest in Yemen amidst tensions

Tens of thousands gather for prayers and protests both for and against President Ali Abdullah Saleh’s three-decade rule.