Yet again, famine stalks the Horn of Africa. More than 10m people are fighting for survival, mainly pastoralist communities in the hyper-arid regions of Somalia, Ethiopia, and northern Kenya. Every day brings news of more deaths and massive inflows of starving people into refugee camps in Kenya, across the border from Somalia.

The immediate cause of this disaster is clear: the rains have failed for two years running in the dry regions of East Africa. These are places where water is so scarce, year after year, that crop production is marginal at best. Millions of households, with tens of millions of nomadic or semi-nomadic people, tend camels, sheep, goats, and other livestock, which they move large distances to reach rain-fed pasturelands. When the rains fail, the grasses shrivel, the livestock die, and communities face starvation.

Pastoralism has long been a harrowing existence in the Horn of Africa. The location of life-supporting pasturelands is determined by the unstable and largely unpredictable rains, rather than by political boundaries. Yet we live in an era when political boundaries, not the lives of nomadic pastoralists, are sacrosanct. These boundaries, together with growing populations of sedentary farmers, have hemmed in pastoralist communities.

The political boundaries exist as a legacy of the colonial era, not as the result of cultural realities and economic needs. Somalia, for example, contains only a part of the Somali-speaking pastoralist population, with large numbers living across the border in Kenya and Ethiopia. As a result, the Ethiopian-Somalia border has been war-torn for decades.

A massive drought this year was not exactly predictable, but the risk of famine was easily foreseeable. Indeed, two years ago, in a meeting with US President Barack Obama, I described the vulnerability of the African drylands. When the rains fail there, wars begin. I showed Obama a map from my book Common Wealth, which depicts the overlap of dryland climates and conflict zones. I noted to him that the region urgently requires a development strategy, not a military approach.

Obama responded that the US Congress would not support a major development effort for the drylands. “Find me another 100 votes in Congress,” he said.

I don’t know whether Obama’s leadership might have found those votes, but I do know that the US has not mustered the national effort to respond effectively to the Horn of Africa’s needs. The US is far too focused on expensive and failed military approaches in the drylands – whether in Afghanistan, Pakistan, Yemen, or Somalia – to pay heed to long-term economic development strategies aimed at addressing the root causes of these countries’ ongoing crises.

This year’s drought came at a time of political and economic turmoil in both the US and Europe. The distorted political system of the US gives the rich everything they want in the form of tax cuts, while slashing programmes for the poor. There is no interest in Washington DC to address the needs of America’s poor, much less the needs of the world’s poorest.

In Europe, the global financial crisis of 2008 left a legacy of deep political and economic crises in the weaker economies of southern Europe. This crisis absorbed almost all of the European Union’s political attention this summer, even as famine in Africa has worsened.

The unfolding disaster in the Horn of Africa will not solve itself, and four factors make the situation potentially explosive. First, long-term human-induced climate change seems to be bringing more droughts and climate instability. The US and Europe are not only failing to respond to the African drought; they have probably contributed to it through their greenhouse-gas emissions.

Second, fertility rates and population growth in the Horn of Africa continue to be extremely high, even as children perish in the famine. Unless and until widespread family planning and modern contraceptive services are established, expanding populations in the Horn of Africa will crash against a harsher future climate. Third, the region is already living in extreme poverty, so adverse shocks push it toward calamity. And, finally, regional politics are highly unstable, leaving the Horn extremely vulnerable to conflict.

But there is still realistic hope. The Millennium Villages Project, which I have the honour of helping to lead, has demonstrated that pastoralist communities can be empowered through targeted investments in livestock management, veterinary care, business development, mobile health clinics, boarding schools, and local infrastructure such as safe water points, off-grid electricity, and mobile telephony. Cutting-edge technologies, together with strong community leadership, can unlock long-term sustainable development.

The countries of the Horn of Africa are now stepping forward to help themselves through this approach. Six countries in the region with large dryland zones – Ethiopia, Somalia, Kenya, Uganda, Djibouti and South Sudan – have joined together in a Drylands Initiative to use best practices and cutting-edge technologies to support their pastoralist communities’ effort to escape the scourges of extreme poverty and famine. Many companies, such as Ericsson, Airtel, Novartis, and Sumitomo Chemical, are participating in this effort by making their technologies available to impoverished pastoralist communities.

A new regional partnership is starting to take hold, beginning with the affected communities and their national governments. Several countries in the Arabian Peninsula, just across the Red Sea from the Horn, are also showing an encouraging readiness to deploy their oil earnings for emergency relief and long-term development. The Islamic Development Bank, representing the 57 members of the Organisation of Islamic Cooperation, is also showing leadership. Through this new partnership of communities, governments, businesses, and academia, the current crisis could yet mark the start of regional recovery and development.

Jeffrey D Sachs is Professor of Economics and Director of the Earth Institute at Columbia University. He is also Special Advisor to United Nations Secretary-General on the Millennium Development Goals. 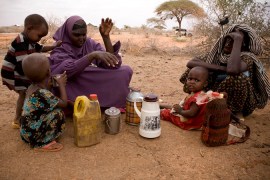 Genocidal politics and the Somali famine

The blame for Somalia’s devastating famine should not be levelled at the weather, but at geopolitics and armed militia. 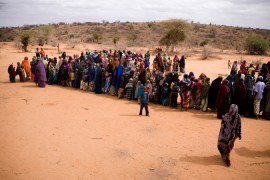 During the worst drought in 60 years, over 11 million people across the Horn of Africa are at risk of dying. 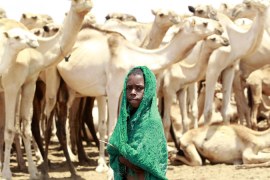 US president calls for “international response” to famine in Horn of Africa, as Somalia appeals for more drought relief. 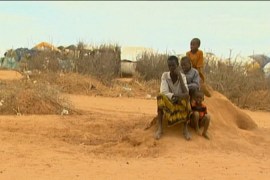 Up to 800 Somali children, some unaccompanied, arrive in Kenya’s refugee camps every day.