If there is one thing that pretty much all Israelis agree on, it is the determination not to be perceived as, or to actually be, a “freier“, a Hebrew slang term for “sucker” or “chump”. Nobody likes to be taken advantage of, but Israelis seem more sensitive to this than other people, sometimes even preemptively turning the other guy into a freier rather than let him get you first.

Well, guess what? The entire State of Israel is being played for a freier right now, with the actual freier extravaganza taking place on August 24.

That is the day that fired Fox News commentator Glenn Beck will convene his “Restoring Courage” rally at the Teddy stadium. The gathering, the first major Beck event since Fox News cancelled his television show, is designed to restore Beck’s image by identifying him with the State of Israel, a country popular across the political spectrum in the United States.

A successful rally in Israel could help transform Beck’s reputation from a failed extreme right-wing demagogue to an international figure popular in a country that is special to many, if not most, Americans.

Beck intends to use Israel as a prop in his effort to get back on top.

Unfortunately, although identification with Israel can only help Beck’s image, it can only harm Israel’s. That is because in the United States, Beck is a divisive and polarising figure, even among ardent conservatives. That’s the reason Fox News ultimately fired him, which incidentally occurred after virtually all his sponsors abandoned him. Any product touched by Beck is damaged.

If his rally succeeds in achieving mainstream support in Israel, Israel will be damaged, too – especially among the vast majority of those in the US who see him as a bigoted extremist.

Among the reasons mainstream Americans do not like Beck is his insensitive exploitation of the Holocaust and Nazism to smear his opponents. Most recently, this ugly insensitivity extended to the Norwegian campers who were killed in the Oslo terrorist attack. Because the camp was sponsored by Norway’s Labor Party, Beck likened the murdered kids to the “Hitler Youth”. This slur was reminiscent of Beck’s attacks on the Jewish billionaire, George Soros, who survived the Holocaust as a teenager.

Beck, who hates Soros’ liberal economic views, said that the Jewish Soros was a Nazi collaborator rather than a Nazi victim. (Imagine, anyone saying that about a 14-year-old child; of course some of the Oslo campers were 14, too) He also has repeatedly depicted Soros as the archetypal international Jew who secretly runs the world, going so far as to depict the United States as Soros’ puppet. (Beck’s slurs against Soros led to his being condemned by numerous American Jewish organizations.) Beck has also repeatedly invited extreme right-wing and anti-Semitic speakers to appear on his show, often the kind of speakers who could never appear on mainstream television because of their views.

Not surprisingly, Beck has been roundly denounced for his tolerance for anti-Semitism and his insensitivity to the Holocaust. He always responds the same way: “I love Israel.”

If Israel “loves him back” it will go far toward rehabilitating a disgraced US media figure. It will also antagonise the vast majority of Americans who consider Beck a hateful bigot. Perhaps, most significantly, it will antagonise Democrats who almost universally despise Beck – but whose support for Israel is vital in maintaining the US-Israel alliance.

Israel cannot allow that to happen. Glenn Beck is playing Israel for a freier. Hopefully, Israel will turn the tables on him and show him that Israelis will not be used to advance the career of a failed right-wing showman, especially one whose views are so odious. 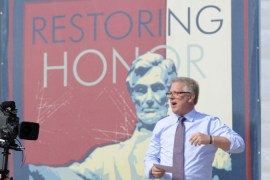 Is the US witnessing the birth of a radical new movement? 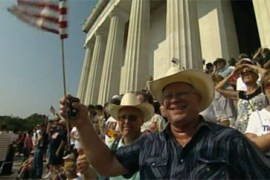 Thousands of people gather in Washington for rally organised by right-wing commentator. 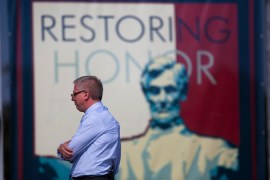 Why do Jewish groups ignore Beck?