The Syrian regime’s response to five months of popular uprising was described by a recent report of the International Crisis Group as “slow motion suicide”, resulting from a “mix of uninhibited brutality, sectarian manipulation, crude propaganda and grudging concessions”.

The regime opted for a survival strategy: responding by violence and threatening the population with chaos and civil war in the event of its demise. The objective was to launch a war of attrition by playing on time to wear out any internal revolt. It chose, however, the wrong combination of brutal repression and gradual concessions. The result was a crisis of confidence which was too deep to be overcome by mere calls for national dialogue and reform.

The death toll is estimated at 2,000 civilian casualties (including more than 100 children), and 400 members of the security services. The situation has now reached a stalemate. Neither side appears to be able to defeat the other. Protests are rallying at major urban and rural centres, including Damascus and Aleppo in the last weeks. Rallies continue in Hama, Homs, Lattakia, the Idlib province, and continue to be met with massive military assaults and house to house arrests. The cities of Homs, Hama and Deir ez-Zor were brutally besieged by the regime’s armed forces; hundreds of civilian casualties have fallen since the start of the holy month of Ramadan. In Deir ez-Zor, the regime was met with strong resistance by local tribesmen, including the leading Baqqara tribe who joined the opposition movements.

On July 17, the National Salvation conference held in Istanbul gathered 450 opposition figures who called for civil disobedience throughout the country. Tenets of regime survival quite naively assumed that they would effectively counter the historical meeting held in Damascus on June 27 by prominent opposition figures in the Semiramis Hotel of Damascus. The regime’s so-called “national dialogue” conference held on July 10 included a few organic intellectuals and public figures which were carefully selected and summoned to contribute to the process of constitutional amendment and political reform. The strategy was to divide the opposition and maintain the status quo. Dialogue under repression was, however, firmly rejected by the opposition.

In its struggle for survival, the regime has a few cards to play. Syrians are now extremely worried about the fragility of their country and the dangers that lurk around the corner. Being in a web of strategic networks, the consequences of instability and insecurity in Syria would potentially be far-reaching. Events can turn in any direction and the next month will be crucial.

A long-term and responsible vision is needed at this stage to prepare for a sustainable and peaceful transition. Appeals have been made within US neo-conservative think-tanks to implement energy sanctions on the oil and gas sectors to strangle and weaken the Assad regime. Such sanctions are ill-advised as they would imply collective punishment of a population already under severe economic and political hardship.

Third-parties are sometimes brought in to break stalemates. The problem here would be to find an impartial mediator with no specific agenda who would be recognizsd and accepted by both sides. The would-be mediator also needs to be able to bring effective pressure on the regime to hand over power in a transition phase towards democratic representation.

Turkey’s foreign minister Ahmet Davutoglu, famous for his “zero-problems” approach to neighbouring countries, was sent to Damascus, apparently to issue a warning and possibly suggest a way out of the crisis. Recep Tayyip Erdogan’s government appears, however, to have fallen out of grace. On the one hand, his collusion with the Syrian Muslim Brotherhood is increasingly worrying secularists amongst the opposition. On the other hand, the Syrian government’s seven-year-old “special relationship” with Turkey, which came at the price of major concessions on water and territorial claims, is now seriously affected by the presence of more than 10,000 refugees in Turkey.

What other countries could represent viable sources of mediation? Saudi Arabia, the United States, Russia? A shift in Russia’s position was witnessed on August 4, when the United Nations Security Council issued a statement condemning violence against civilians in Syria. Saudi Arabia and other Gulf States have now increased pressure by recalling their ambassadors from Damascus. This move was clearly taken in coordination with Washington. Their agenda does not appear void of any calculation and whilst some members of the Syrian opposition now openly state their will to distance themselves from the Iran-Hezbollah nexus, this choice is not shared by all.

Prominent opposition figures such as Burhan Ghalioun consider Egypt, Turkey and Iran as Syria’s natural partners in the region for the future. The regime has indeed lost any internal legitimacy drawn from its foreign policy but the Syrian population would not settle for any foreign policy re-alignment which would not secure the full return to Syrian sovereignty of the Israeli-occupied Golan Heights.

International condemnation and continuous scrutiny of the repression is much needed to mobilise and increase pressure over the regime. But foreign military intervention is still firmly rejected by the majority of the Syrian population. To secure legitimacy, the opposition’s strategy should focus on the internal front. A combination of backward and forward looking approaches could help in establishing a viable new regime. The battle can be won from the inside while preserving the country from chaos and insecurity in an inclusionary rather than exclusionary process. All religious and ethnic components of the population, including the Alawite community, should be included in the process.

Syria is one of the few states remaining in the region which has successfully managed to build a secular state with a strong national identity transcending ethnic or religious affiliations. So far, protesters have remarkably resisted the regime’s attempts at framing the unrest along confessional lines by arming 30,000 villagers in the Alawite provinces and giving licenses to kill to the Shabbiha, or armed thugs brought in from the Alawite regions. Minorities, such as Christians, Alawites and Druze, continue to actively contribute to the uprisings in the provinces of Deraa, Homs and other parts of the country. While it has improved coordination and strengthened its outreach, the Syrian opposition still remains scattered and weakened by power struggles and ideological differences.

Since August 1, protesters have seen their ranks invigorated after the evening prayers. Any killings carried out during Ramadan, a month of fasting, prayers and spiritual dedication for Muslims, carry additional costs for the regime. Local Coordination Committees nurture the ambition to bring more forcefully Damascus and Aleppo – with 40 per cent of Syria’s 22 million inhabitants – into the protests to reach a critical mass.

Plans to reach out to the second circles of power, beyond the immediate ruling family, are also under consideration. Rumours of growing defections in the army are now reaching the news. Speculations on the recent replacement of the minister of defence, General Ali Habib, evoke his presumed inclinations in favour of the revolution. The regime is again playing the sectarian card by appointing a new Christian minister of defence.

If given guarantees for the post-revolution phase, the 1,200 Alawite officers, with hundreds of men under their command, could be drawn into the transitional phase leading to political pluralism and the rule of law; otherwise, they might resist to the bitter end. Prosecution should be sought against the ones who have perpetrated crimes. But the bulk of the army (with approximately 200,000 soldiers and officers) will need to somehow be integrated. All this presumes that control of military and security affairs is effectively handed over to civilian rule in the transition to democracy.

There is still a long way to go, but the road to Damascus has been taken, and there is no turning back.

Dr Marwa Daoudy is a lecturer at the Middle East Centre, St Antony’s College, the University of Oxford. 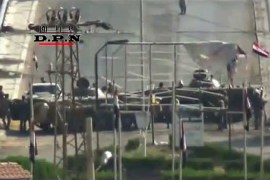 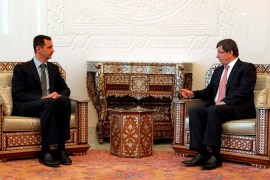 Ahmet Davutoglu visits Damascus days after Turkey said its patience with Syria’s crackdown on protests was running out.

The case against military intervention in Syria