The violent attacks last Friday, July 15 by uniformed policemen on journalists dressed in bright orange vests (provided to them by the police to distinguish them from protesters) continues to baffle many.

The Jordanian authorities were clearly opposed to the demonstration planned for the Nakheel Park near downtown Amman. They were afraid that the demonstrators wanted a prolonged strike, similar to the one in Tahrir and Pearl squares in Egypt and Bahrain, respectively.

The pressure on the organisers was clear if one read the local papers that morning. The security branches of the government were poised to deny the demonstrators their desire and made some last-minute changes regarding the location of the demonstration in order to ensure that it would not be an extended protest. On Friday morning, it was clear that the various security forces were pumped up and ready for a fight with the demonstrators if the latter didn’t behave according to this plan.

For a while, the government plan seemed to work. The number of demonstrators was not as big as feared. Only 2,500 were said to have shown up, and governmental circles appeared to be happy with this relatively low turnout. Still, they wanted to make sure that the demonstrators would give up on any plans for a prolonged stay and so were ready to deal with anyone that deviated from that plan.

Then something went terribly wrong. The demonstrators were unhappy with the way the police wanted to cage them in and tried to suddenly change the venue. The police refused, and when the demonstrators’ leaders insisted, the police started to attack wayward demonstrators. And then something even worse happened. The pumped-up police also turned on journalists, especially those with cameras, whether wearing the police-issued press vests or not. Journalists, including reporters from Al Jazeera, The New York Times, local dailies, Petra (Jordan’s official news agency) and others, were badly beaten up.

The most vivid (and, since, a source of jokes and Facebook exchanges) is the image of a traffic police officer using a grill taken from a street barbeque vendor to beat up journalists. Afterwards, the journalists injured were visited by government and security officials. The government spokesman apologised and promised a speedy investigation that would produce results within 72 hours.

No one was able to answer the simple question of why journalists were attacked. Was it a decision made by senior security leaders or political leaders? Was it a decision decided by field security leaders? Or was it simply the action of some rogue members who might have been provoked? More importantly, what was the motive behind such counterproductive action? A government report issued on July 20 found the police guilty but didn’t sufficiently answer why they had attacked the journalists.

The standard answer by many journalists and opposition leaders was that the attack is part of an attempt to silence the media and to cover up the security officers’ actions. However, this simplistic answer does not make much sense. The security authorities seemed to genuinely wish to protect journalists, presenting them with vests. Some journalists claim that the vest idea was a trap, to single journalists out.

But then why would senior leaders who made the vests available apologise afterwards and ask for a speedy investigation? One conspiracy theory states that uniformed police want a raise for working in dangerous situations, like the gendarmerie officers do. This idea comes from the fact that the day after the events, 70 MPs signed a petition calling on the police chief to provide uniformed police with such allowance.

The more likely scenario is that isolated, rogue policemen who acted on their own. Four policemen were since arrested, but images on Arab satellite stations and YouTube show a much bigger uniformed police attack force.

If this is indeed the case, then two issues must be taken into consideration. First, there needs to be much more training for all security personnel asked to deal with demonstrations. Not only do they need to learn to differentiate between demonstrators and journalists, but they also need to learn to tolerate verbal assaults and any other provocations. Second, security personnel need to be deterred from actions that badly hurt their profession and the reputation of Jordan. A local website has posted a list of cases from the past six months in which the government promised to investigate certain cases dealing with police brutality, but then the cases were buried and never followed up on or made public.

Protests in Jordan continue to be managed. Except for one person who died in unclear circumstances, attempts to break up protests for the past six months have gone without serious negative results. However, unless security forces that are assigned to deal with demonstrators are not trained and held accountable for their mistakes, the situation in Jordan can easily and quickly get out of hand.

Daoud Kuttab is a Palestinian journalist and former Ferris Professor of Journalism at Princeton University. Follow him on twitter.com/daoudkuttab 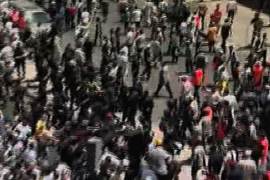 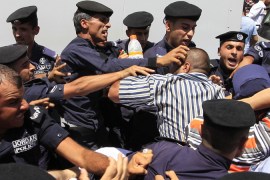 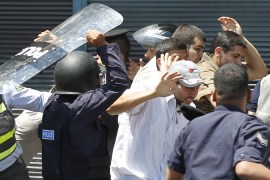 Four officers arrested for allegedly beating and injuring journalists and protesters during pro-reform rally in Amman.