Eliminating nuclear weapons is the democratic wish of the world’s people. Yet no nuclear-armed country currently appears to be preparing for a future without these terrifying devices. In fact, all are squandering billions of dollars on modernisation of their nuclear forces, making a mockery of United Nations disarmament pledges. If we allow this madness to continue, the eventual use of these instruments of terror seems all but inevitable.

The nuclear power crisis at Japan’s Fukushima power plant has served as a dreadful reminder that events thought unlikely can and do happen. It has taken a tragedy of great proportions to prompt some leaders to act to avoid similar calamities at nuclear reactors elsewhere in the world. But it must not take another Hiroshima or Nagasaki – or an even greater disaster – before they finally wake up and recognise the urgent necessity of nuclear disarmament.

This week, the foreign ministers of five nuclear-armed countries – the United States, Russia, Britain, France, and China – will meet in Paris to discuss progress in implementing the nuclear-disarmament commitments that they made at last year’s Nuclear Non-Proliferation Treaty (NPT) review conference. It will be a test of their resolve to transform the vision of a future free of nuclear arms into reality.

If they are serious about preventing the spread of these monstrous weapons – and averting their use – they will work energetically and expeditiously to eliminate them completely. One standard must apply to all countries: zero. Nuclear arms are wicked, regardless of who possesses them. The unspeakable human suffering that they inflict is the same whatever flag they may bear. So long as these weapons exist, the threat of their use – either by accident or through an act of sheer madness – will remain.

We must not tolerate a system of nuclear apartheid, in which it is considered legitimate for some states to possess nuclear arms but patently unacceptable for others to seek to acquire them. Such a double standard is no basis for peace and security in the world. The NPT is not a license for the five original nuclear powers to cling to these weapons indefinitely. The International Court of Justice has affirmed that they are legally obliged to negotiate in good faith for the complete elimination of their nuclear forces.

The New START agreement between the US and Russia, while a step in the right direction, will only skim the surface off the former Cold War foes’ bloated nuclear arsenals – which account for 95 per cent of the global total. Furthermore, these and other countries’ modernisation activities cannot be reconciled with their professed support for a world free of nuclear weapons.

It is deeply troubling that the US has allocated $185bn to augment its nuclear stockpile over the next decade, on top of the ordinary annual nuclear-weapons budget of more than $50bn. Just as unsettling is the Pentagon’s push for the development of nuclear-armed drones – H-bombs deliverable by remote control.

Russia, too, has unveiled a massive nuclear-weapons modernisation plan, which includes the deployment of various new delivery systems. British politicians, meanwhile, are seeking to renew their navy’s aging fleet of Trident submarines – at an estimated cost of £76bn ($121bn). In doing so, they are passing up an historic opportunity to take the lead on nuclear disarmament.

Every dollar invested in bolstering a country’s nuclear arsenal is a diversion of resources from its schools, hospitals, and other social services, and a theft from the millions around the globe who go hungry or are denied access to basic medicines. Instead of investing in weapons of mass annihilation, governments must allocate resources towards meeting human needs.

The only obstacle we face in abolishing nuclear weapons is a lack of political will, which can – and must – be overcome. Two-thirds of UN member states have called for a nuclear-weapons convention similar to existing treaties banning other categories of particularly inhumane and indiscriminate weapons, from biological and chemical arms to anti-personnel land mines and cluster munitions. Such a treaty is feasible and must be urgently pursued.

It is true that nuclear weapons cannot be uninvented, but that does not mean that nuclear disarmament is an impossible dream. My own country, South Africa, gave up its nuclear arsenal in the 1990s, realising it was better off without these weapons. Around the same time, the newly independent states of Belarus, Kazakhstan, and Ukraine voluntarily relinquished their nuclear arms, and then joined the NPT. Other countries have abandoned nuclear-weapons programs, recognising that nothing good could possibly come from them. Global stockpiles have dropped from 68,000 warheads at the height of the Cold War to 20,000 today.

In time, every government will come to accept the basic inhumanity of threatening to obliterate entire cities with nuclear weapons. They will work to achieve a world in which such weapons are no more – where the rule of law, not the rule of force, reigns supreme, and cooperation is seen as the best guarantor of international peace. But such a world will be possible only if people everywhere rise up and challenge the nuclear madness.

Archbishop Desmond Tutu is a Nobel Peace Prize laureate and supporter of the International Campaign to Abolish Nuclear Weapons. 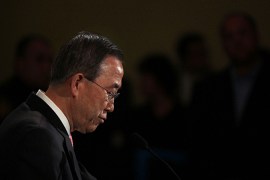 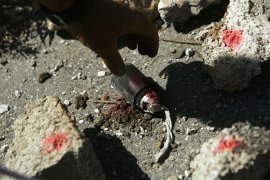 Australia reneging on cluster mine ban? 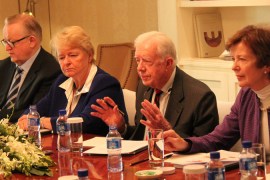 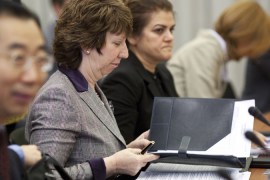 Where is the ethical leadership over Syria ?