They call it “bug splat“, the splotch of blood, bones, and viscera that marks the site of a successful drone strike. To those manning the consoles in Nevada, it signifies “suspected militants” who have just been “neutralised”; to those on the ground, in most cases, it represents a family that has been shattered, a home destroyed.

Since June 18, 2004, when the CIA began its policy of extrajudicial killings in Pakistan, it has left nearly 250 such stains on Pakistani soil, daubed with the remains of more than 2,500 individuals, mostly civilians. More recently, it has taken to decorating other parts of the world.

Since the Pakistani government and its shadowy intelligence agencies have been complicit in the killings, the CIA has been able to do all this with complete impunity. Major human rights organisations in thrall to the Obama Administration have given it a pass. So have the media, who uncritically accept officials’ claims about the accuracy of their lethal toys.

On July 18, 2011, three Pakistani tribesmen, Kareem Khan, Sadaullah, and Maezol Khan, filed a formal complaint against John A Rizzo, the CIA’s former acting General Counsel, at a police station in Islamabad. Until his retirement on June 25, 2009, Rizzo served as legal counsel to the program whose victims have included Kareem Khan’s son and brother, Maezol Khan’s seven-year-old son, and three family members of Sadaullah (who also lost both legs and an eye in the attack).

In an interview with Newsweek‘s Tara McKelvey, Rizzo bragged that he was responsible for signing off on the “hit list” for “lethal operations”. The targets were “blown to bits” in “businesslike” operations, he said. By his own admission, he is implicated in “murder”. Indeed, he boasted: “How many law professors have signed off on a death warrant?” And that is not the full extent of Rizzo’s derring-do: he claims he was also “up to my eyeballs” in Bush’s program of torture in black sites in Afghanistan and elsewhere.

The detailed First Information Report (FIR) that barrister Mirza Shahzad Akbar prepared on behalf of the tribesmen was filed at the Secretariat Police Station in Islamabad, whose territorial jurisdiction includes the residence of Rizzo’s leading co-conspirator Jonathan Banks, the CIA station chief who has since fled Pakistan. As a party to a conspiracy to commit murder in Pakistan, Akbar believes that Rizzo is subject to the country’s penal code.

Clive Stafford Smith, the celebrated human rights lawyer best known as George W Bush’s nemesis over Guantanamo, is leading the campaign to secure an international arrest warrant for Rizzo. Asked about the question of jurisdiction, Smith told me that that “there is no issue of jurisdiction – these are a series of crimes, including murder … committed on Pakistani soil against Pakistani citizens”. The CIA, he says, is “waging war against Pakistan”. He insists that “there is no question that [Rizzo] is liable for the crimes he is committing. The only issue is whether he will face the music or be kept hidden by the authorities”.

Smith, who heads the legal charity Reprieve, is a practical man, uninterested in mere symbolic gestures. Earlier, he successfully sued the Bush administration for access to prisoners at Guantanomo and has so far secured the release of 65 of them. He is confident that once the Islamabad police issues a warrant, Interpol will have no choice but to pursue the case. Furthermore, he notes, depending on the success of this test case, they will broaden it to also include drone operators.

The US position so far is to either claim that it is engaged in legitimate self-defence, or to make the policy more palatable by downplaying its human cost. Neither argument is tenable.

The laws of war do not prohibit the killing of civilians unless it is deliberate, disproportionate or indiscriminate. However, Akbar and Smith reject the applicability of these laws to CIA’s drone war. “The US has to follow the laws of war,” Smith recently told the Guardian. But “the issue here is that this is not a war” – there is no declared state of conflict between the US and Pakistan. Moreover, Gary Solis of Georgetown University, an expert in the laws of war, told Newsweek that “the CIA who pilot unmanned aerial vehicles are civilians directly engaged in hostilities, an act that makes them ‘unlawful combatants’ and possibly subject to prosecution”.

The US government has made bold claims for the extraordinary accuracy of its wonder-weapons. In a press conference earlier this year, US president Barack Obama’s chief counter-terrorism adviser John Brennan insisted that “nearly for the past year there hasn’t been a single collateral death” in the CIA’s drone war.

This would be remarkable indeed if it weren’t demonstrably false. A major investigation by the London-based Bureau of Investigative Journalism (TBIJ) has shown that in just ten CIA drone attacks since August last year there were a minimum of 45 individuals killed who were confirmed civilians. These include women, children, policemen, students and rescuers among others. TBIJ has also identified an additional 15 attacks in which 65 more civilians might have been killed.

Unlike the New America Foundation or the neoconservative Long War Journal – the two most frequently cited, and least reliable, sources on drone casualties – TBIJ’s investigation does not rely on official claims or the media reports that exclusively rely on them. Chris Woods, the journalist who led the TBIJ investigation, told me earlier this month that, besides reviewing thousands of media reports about the attacks – including those written days, weeks, or even months after the initial incident – the Bureau has worked with journalists, researchers, and the lawyers representing the civilians killed in the attacks. The Bureau has also employed its own researchers in Waziristan to corroborate the evidence it has gathered.

However, as the Bureau notes, its figures for civilian casualties are a “conservative estimate”. It has only included those in its list whose civilian status it can confirm through multiple sources. The actual figures are likely much higher. But given the restrictions on travel to the region, a more comprehensive assessment of the war’s human cost remains impossible.

The respected Pakistani journalist Rahimullah Yusufzai told me that it is no longer possible for journalists from outside to travel to the tribal region and, as a result, most of the reporting comes from a handful of stringers based in Miranshah and Mir Ali.

Confined to the environs of the region’s two main cities, even the journalists based in FATA have to call up the military’s press office for information on all strikes that occur beyond those limits. The kind of courage exhibited by 39-year-old Noor Behram, who photographed the aftermath of 27 drone attacks in North and South Waziristan between November 29, 2008, and June 15, 2011, is rare. The photos are currently on display at London’s Beaconsfield gallery. Unsurprisingly, the picture that emerges does not quite jibe with the CIA’s claims. “For every ten to 15 people killed,” he told the Guardian, “maybe they get one militant”.

The CIA claims that of the nearly 2,500 Pakistanis killed in the drone attacks, 35 were “high value targets” – that is, people it actually intended to kill. The rest it claims were mostly “suspected militants”. The world of think-tankery is even more linguistically challenged – in the New America Foundation’s database there is no category for “civilian” – there are only “militants” and “others”. Until now we had only the CIA and the ISI’s word for the presumed guilt of those killed. Given the history of both organisations there is ample ground for scepticism, but in the light of the Bureau’s investigation, the public would be wise to treat all future victims of the drone war as civilians unless proven otherwise.

But even where guilt is established, the killings would still constitute extra-judicial murder since no declared state of hostilities exists between the US and Pakistan. Things have come a long way since July 2001, when following Israel’s “targeted killing” of Palestinians, the then US Ambassador to Israel Martin Indyk declared: “The United States government is very clearly on record as against targeted assassinations … They are extrajudicial killings, and we do not support that.”

Under Obama, extrajudicial killings have been adopted as a less complicated alternative to detention. Earlier in the year, Newsweek quoted one of Obama’s legal svengalis – American University’s Kenneth Anderson, author of an essay on the subject that was read widely by Obama White House officials – as saying: “Since the US political and legal situation has made aggressive interrogation a questionable activity anyway, there is less reason to seek to capture rather than kill.”

“And if one intends to kill, the incentive is to do so from a standoff position because it removes potentially messy questions of surrender.”

So far, the drones policy has been an unmitigated disaster. The handful of Taliban and al-Qaeda leaders killed have been replaced by a more ruthless leadership which has progressively expanded its operational ambit into the Pakistani mainland. To the extent that “militants” are killed, they are mostly foot soldiers whose death has no discernible impact on the outcome of the insurgency; indeed, it merely helps deepen resentment and broaden the militants’ support base. The CIA practice of bombing funerals and rescuers has ensured that even those who might otherwise disdain the Taliban identify with them as common victims of a uniquely barbarous adversary. Unable to strike back at the US, the Taliban instead revenge themselves on Pakistani soldiers and civilians in attacks that are no less brutal.

Two years ago, when I spoke to Yusufzai amid one of the most ferocious wave of terrorist attacks on Peshawar, he remained optimistic that, once the US withdrew from Afghanistan the militancy would recede. Events of the past two years have tempered his optimism. Last week when I spoke to him again, he told me that conditions have deteriorated so much that Pakistan will have to live with the consequences of America’s reckless war long after it has withdrawn. The drone attacks are merely compounding the mess.

Campaigners in Britain and Pakistan are determined to bring transparency to Obama’s secretive war and justice to its victims. Barrister Akbar told me in an email that with his team of researchers, he is “working to dig out information beyond the news reports, trying to find out the identities of individuals killed in drone strikes”. He is now representing a growing number of individuals who have lost family members to the CIA drones, and many more are coming forward.

“This is only the start of a long, long, peaceful battle to stop this kind of ‘murder by videogame’,” says Smith. “What we most need are allies willing to work with us, and help provide truthful information about what is really happening on the ground in Pakistan’s border regions.”

Muhammad Idrees Ahmad is a Glasgow-based sociologist and the co-editor of Pulsemedia.org. He can be reached at idrees@pulsemedia.org. You can also follow him on Twitter: @im_pulse.

‘Gaming in Waziristan,’ an exhibition that includes Noor Behram’s photos, will remain on display at Beaconsfield in London until August 5, 2011. 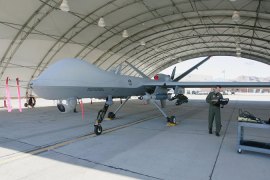 Pakistan stops US from using ‘drone base’

Defence minister says Americans told to leave base from where they are alleged to have launched drone strikes. 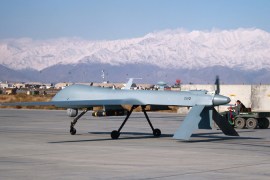 Arrest of ex-CIA lawyer sought over drone use

Why Macron is wrong about Assad