Economists like to talk about thresholds that, if crossed, spell trouble. Usually there is an element of truth in what they say. But the public often overreacts to such talk.

Consider, for example, the debt-to-GDP ratio, much in the news nowadays in Europe and the United States. It is sometimes said, almost in the same breath, that Greece’s debt equals 153 per cent of its annual GDP, and that Greece is insolvent. Couple these statements with recent television footage of Greeks rioting in the street. Now, what does that look like?

Here in the US, it might seem like an image of our future, as public debt comes perilously close to 100 per cent of annual GDP and continues to rise. But maybe this image is just a bit too vivid in our imaginations. Could it be that people think that a country becomes insolvent when its debt exceeds 100 per cent of GDP?

That would clearly be nonsense. After all, debt (which is measured in currency units) and GDP (which is measured in currency units per unit of time) yields a ratio in units of pure time. There is nothing special about using a year as that unit. A year is the time that it takes for the earth to orbit the sun, which, except for seasonal industries like agriculture, has no particular economic significance.

We should remember this from high school science: always pay attention to units of measurement. Get the units wrong and you are totally befuddled.

If economists did not habitually annualise quarterly GDP data and multiply quarterly GDP by four, Greece’s debt-to-GDP ratio would be four times higher than it is now. And if they habitually decadalised GDP, multiplying the quarterly GDP numbers by 40 instead of four, Greece’s debt burden would be 15 per cent. From the standpoint of Greece’s ability to pay, such units would be more relevant, since it doesn’t have to pay off its debts fully in one year (unless the crisis makes it impossible to refinance current debt).

Some of Greece’s national debt is owed to Greeks, by the way. As such, the debt burden woefully understates the obligations that Greeks have to each other (largely in the form of family obligations). At any time in history, the debt-to-annual-GDP ratio (including informal debts) would vastly exceed 100 per cent.

Most people never think about this when they react to the headline debt-to-GDP figure. Can they really be so stupid as to get mixed up by these ratios? Speaking from personal experience, I have to say that they can, because even I, a professional economist, have occasionally had to stop myself from making exactly the same error.

Economists who adhere to rational-expectations models of the world will never admit it, but a lot of what happens in markets is driven by pure stupidity – or, rather, inattention, misinformation about fundamentals, and an exaggerated focus on currently circulating stories.

The reality of Greek debt

What is really happening in Greece is the operation of a social-feedback mechanism. Something started to cause investors to fear that Greek debt had a slightly higher risk of eventual default. Lower demand for Greek debt caused its price to fall, meaning that its yield in terms of market interest rates rose. The higher rates made it more costly for Greece to refinance its debt, creating a fiscal crisis that has forced the government to impose severe austerity measures, leading to public unrest and an economic collapse that has fueled even greater investor skepticism about Greece’s ability to service its debt.

This feedback has nothing to do with the debt-to-annual-GDP ratio crossing some threshold, unless the people who contribute to the feedback believe in the ratio. To be sure, the ratio is a factor that would help us to assess risks of negative feedback, since the government must refinance short-term debt sooner, and, if the crisis pushes up interest rates, the authorities will face intense pressures for fiscal austerity sooner or later. But the ratio is not the cause of the feedback.

A paper written last year by Carmen Reinhart and Kenneth Rogoff, called “Growth in a Time of Debt”, has been widely quoted for its analysis of 44 countries over 200 years, which found that when government debt exceeds 90 per cent of GDP, countries suffer slower growth, losing about one percentage point on the annual rate.

One might be misled into thinking that, because 90 per cent sounds awfully close to 100 per cent, awful things start happening to countries that get into such a mess. But if one reads their paper carefully, it is clear that Reinhart and Rogoff picked the 90 per cent figure almost arbitrarily. They chose, without explanation, to divide debt-to-GDP ratios into the following categories: under 30 per cent, 30-60 per cent, 60-90 per cent, and over 90 per cent. And it turns out that growth rates decline in all of these categories as the debt-to-GDP ratio increases, only somewhat more in the last category.

There is also the issue of reverse causality. Debt-to-GDP ratios tend to increase for countries that are in economic trouble. If this is part of the reason that higher debt-to-GDP ratios correspond to lower economic growth, there is less reason to think that countries should avoid a higher ratio, as Keynesian theory implies that fiscal austerity would undermine, rather than boost, economic performance.

The fundamental problem that much of the world faces today is that investors are overreacting to debt-to-GDP ratios, fearful of some magic threshold, and demanding fiscal-austerity programs too soon. They are asking governments to cut expenditure while their economies are still vulnerable. Households are running scared, so they cut expenditures as well, and businesses are being dissuaded from borrowing to finance capital expenditures.

The lesson is simple: We should worry less about debt ratios and thresholds, and more about our inability to see these indicators for the artificial – and often irrelevant – constructs that they are.

Robert J. Shiller is Professor of Economics at Yale University. 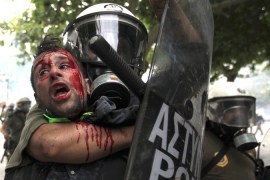 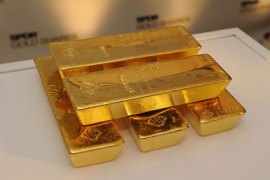 Not dollar, not euro, but gold

As the US dollar’s value continues to drop, China looks to invest in gold for stability.