A few years ago, the respected Cambridge scholar T J Winter, also known by his Muslim name of Abdal Hakim Murad, gave a fascinating lecture to Humanities staff and students at the University of Leicester. The title was “Islam and the threat of the West”, turning on its head the more usual – then and now – “Islam and the threat to the West”.

It was a novel approach which, in a nutshell, illustrated that, historically, aggression has been directed more from Europe to the Muslim world than the other way round. His evidence for such a view was impeccably sourced.

I thought about Abdal Hakim’s talk this morning as I read the reports coming in of the dreadful bombing and shooting in Norway wherein, of course, there was speculation that these two events were “Islamic-terror related”. No doubt we will learn more over the coming days, but the early signs are, in fact, that the perpetrator was a “blond, blue-eyed Norwegian” with “political traits towards the right, and anti-Muslim views”. Not surprisingly, the man’s intentions were neither linked to these “traits”, nor to his postings on “websites with Christian fundamentalist tendencies”. Any influence “remains to be seen”; echoes of Oklahoma 1995.

Interestingly, this criminal is described by one unnamed Norwegian official as a “madman”. He may well be, but this is one way that the motivations for heinous crimes can be airbrushed out of the story before they have the chance to take hold in the popular imagination.

In 1969, for example, Denis Michael Rohan, an Australian Christian who set fire to Al-Aqsa Mosque in Jerusalem, was dismissed as a “madman” and sent for psychiatric treatment; end of story. The right-wing fundamentalists plotting to destroy the mosque, and the nearby Dome of the Rock, lived to fight another day. I suspect that that is what will happen with the Norwegian bomber/shooter; his right-wing links and Christian fundamentalist contacts will be dismissed as irrelevant. This, we will be told, was the work of a “deranged” person “acting independently”. Ergo, the only organised “terror threats” to civilisation are still “Islamic-related” and the focus of anti-terror legislation and efforts must remain in the Muslim world and on Muslim communities in Europe and the USA.

If we allow this to happen, we will be doing the world a great disservice, not least because the new right is on the rise across the West – and Oklahoma was proof that its followers are capable of immense destruction.

Neo-Nazi immigrants from Eastern Europe have even been active in Israel where the government, while deploring such far-right activity in its midst is actually edging ever more to the far-right on a daily basis. Ministers advocate the ethnic cleansing of Palestinians in order to purify Israel as a “Jewish state”; precious human rights for which the world has struggled are overridden in the name of “state security”; criminals in uniform are allowed to get away, quite literally, with murder.

All of this takes place with the collusion of Western governments which are themselves showing right-wing tendencies towards double-speak on matters of respect and tolerance for minorities. If you are even remotely “different” in Europe today, especially if you are a Muslim, you are eyed with suspicion and must go out of your way to “prove” your loyalty to a state which, if the truth was made known, would get rid of you if only it had the guts to pass the necessary legislation to do so. In some cases, such legislation is virtually in place in the guise of “anti-terror” measures.

All of this is backed by a vociferous and influential right-wing media which supports Israel right or wrong – and a pro-Israel lobby which acts as if it is untouchable. Given the political context across the West, it probably is.

Attacks against the left

It is significant that the target of the Norwegian “madman” appears to have been the left-leaning Labour Party, both in Oslo and on the island where the shootings took place. Across Europe, the left has been forming alliances with Muslim groups to fight fascism and racism of all kinds, and it cannot be a coincidence that The politics of multiculturalism in the new Europe, a collection of essays from across the continent, published in 1997, concluded almost without exception that “the challenge” facing Europe was the presence of large Muslim communities in “our” midst. Anyone who claims therefore, that the perpetrator’s “right-wing traits” and “anti-Muslim views”, or even links with “Christian fundamentalist” websites are irrelevant is trying to draw a veil over the unacceptable truths of such “traits” and expecting us to believe that right-wing ideology is incapable of prompting someone towards such criminality.

Of course, that idea is nonsensical. Right-wing ideology was behind the Holocaust; it has been behind most anti-Semitism and other racism around the world; the notion of Europe’s and Europeans’ racial superiority – giving cultural credibility to the far-right – gave rise to the slave trade and the scramble for Africa leading to untold atrocities against “the Other”; ditto in the Middle and Far East. Ironically, it is also far-right Zionism – far from the socialist myths of Zionist pioneers in the 1930s and before – which has been behind the ethnic cleansing of Palestine throughout the 20th century, right up to today, as a specific policy to be pursued – by military means if necessary.

This is well-documented and yet ignored by our political masters. In the context of the latest apparently far-right atrocities in Norway, it is equally ironic that the word in English for a traitor who collaborates with an enemy power stems from Major Vidkun Quisling who ruled Norway on behalf of Nazi Germany during the Second World War.

We dismiss this “madman” as a one-off “not linked to any international terrorist organisations” at our peril. If nothing else, history has shown us that such ideologies are trans-national across and beyond the West, with catastrophic effects on the rest of the world. We have been warned.

Education and media consultant Ibrahim Hewitt is the chair of trustees of the Palestinian Relief and Development fund and is Senior Editor of the Middle East Monitor. He is also a trustee of Creative Arts Schools Trust.

An earlier version of this article incorrectly identified Denis Michael Rohan as Jewish. Our apologies for the error. 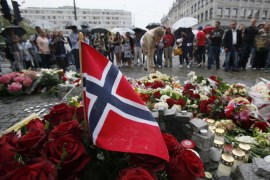 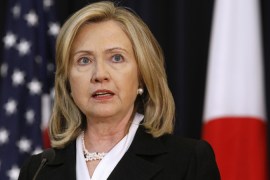 Hillary Clinton says “we stand with the people of Norway” while UK PM expresses outrage over attacks in Oslo and Utoya. 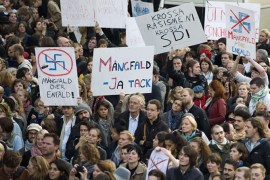 The election of a far-right party into Sweden’s parliament shakes the country’s political landscape.

Crusade against British Muslims in education