The division of Sudan into two states is a dangerous precedent. The Arab world has to draw the right lessons from if it wants to avoid the break-up of other Arab states into ethnic and sectarian enclaves.

The birth of South Sudan is first and foremost a testimony to the failure of the official Arab order, pan-Arabism, and especially the Islamic political projects to provide civic and equal rights to ethnic and religious minorities in the Arab world.

The jubilation that swept the people of southern Sudan at their independence from the predominantly Arab and Muslim north attests to the long-standing feelings of repression and alienation by a people, the majority of whom were born into the post-independence Arab world.

Granted, British rule planted the seeds of ethnic and religious divisions in Sudan and elsewhere in the Arab world. Western and Israeli intervention have played crucial roles in fueling secessionist trends in southern Sudan, and stand to benefit the most from the division of the country.

Avi Dichter, Israel’s former interior security minister, once said: “We had to weaken Sudan and deprive it of the initiative to build a strong and united state. That is necessary for bolstering and strengthening Israel’s national security. We produced and escalated the Darfur crisis to prevent Sudan from developing its capabilities.”

But the Arab world cannot simply explain secession as a product of a Western-Israeli conspiracy.

If anything, it is the repressive regime in Sudan, combined with an incompetent and corrupt official Arab order, that drove legitimately disaffected people in southern Sudan into Western and even Israeli arms seeking independence from a failing Arab world.

Intellectuals in the Arab world should not comfort themselves by pointing – even though rightly so – to Western hypocrisy and double standards in supporting, embracing and recognising the new state of South Sudan while effectively blocking the emergence of an independent Palestinian state.

Arabs should look at their serious blunders and moral failures by facing the fact that the South Sudanese are an oppressed people whose grievances were against Arab rule and not against Western domination. It is true that the people of South Sudan may still find themselves prey to greedy Western governments interested in their rich natural resources, but that does not change the reality that people of the new state celebrated the end of what they viewed as oppression by an Arab and Muslim elite.

Whether the leaders of the new state will prove less repressive and less corrupt than the Khartoum government – and there are indications that they may disappoint their people on both counts – is at the moment irrelevant considering what secession itself says about the Arab world.

The Arab uprisings have already exposed the utter political and financial corruption of Arab leaders and the absence of freedoms and justice. The Arab order has not only failed minorities and its non-Arab components, but the Arab masses as well.

However, even the emerging post-Arab Spring Arab world has yet to prove that it can create societies that embrace diversity, promote inclusion, and do away with sectarianism and ethnic and racial discrimination.

The Arab political order that people are now rebelling against has fostered religious divisions partly as a necessary prerequisite for the survival and continuity of Arab tyrants and authoritarian leaders.

The unwillingness of the Arab leadership in Sudan to embrace a very rich, diverse culture that connects the Arab world with Africa underscores the urgency of reconsidering not only the Arab political systems, as the Arab Spring has done, but also the failure of prevailing political ideologies and political parties to adequately address the rights of ethnic and religious sects and groups.

The pan-Arab nationalist movement proved to be less capable of dealing with ethnic minorities and nationalities than with religious minorities. Pan-Arabism as an ideology did not condone sectarianism, and was never an exclusively Muslim school of thought. While rooted and influenced by the predominantly Muslim culture, it was secular in orientation and did not differentiate between existing religions in the Arab world. In fact, some of its most prominent founders and thinkers were Arab Christians, mostly from Syria, Lebanon, Iraq, Palestine and Egypt.

But while pan-Arabism was initially an anti-colonial movement, some of its branches – especially the Ba’ath Arab parties that ruled Syria and Iraq – demonstrated and practiced destructive chauvinist policies and actions against other ethnic groups and nationalities. The case of the Kurds in both Syria and Iraq testify to different degrees of exclusivist, supremacist and racist policies by both Ba’athist political parties.

Hence the influence of pan-Arab nationalism on the political culture has not always been positive. Instead, it has actually created racist and chauvinist attitudes that obstructed serious condemnation and criticism of the way the national Sudanese government in the North dealt with the people of the South.

Foreign intervention in the South has instead mobilised nationalist feelings in the Arab world against what people viewed as a conspiracy to break up Sudan. Therefore, the political opposition in the Arab world remained eerily silent about atrocities and discrimination practised by the Sudanese government against its own people.

However, the post-independence regime in Sudan had never become part of the pan-Arab project, as it was mostly influenced and even led by the strong Islamist movement there.

It is also true that the Sudan case is not a model of an Islamic rule that many Islamists might be advocating, and many would argue that it contradicted the tolerance upon which an Islamic system is meant to be based. But it is a case in which an Islamic movement had the opportunity to create an Islamic model of inclusion and peace, and failed miserably.

The imposition of the Islamic code and Sharia, but mainly the way they were carried out, no doubt alienated the non-Muslim components of Sudanese society – and was criticised by the more liberal sectors of Sudan.

Thus it became another case of leaders abusing the Islamic religion to maintain control over the country and its people.

The Islamist model that Sudan established also excluded other political ideologies and trends. In 1971, the late Sudanese president Gaafar Nimeiry, the first to impose an Islamic code, carried out a bloody crackdown, arresting and executing members of the then-influential Communist party.

The incident, it must be noted, was not unique or confined to a regime that claimed to be implementing an Islamic code. The Ba’athist party in Iraq carried out a similar crackdown the late 1970s against the Iraqi communists, and even against Ba’athists who disagreed with the party leaders.

Hence in the end, and regardless of the claimed political identities of rulers, whether self-declared pan-Arabist or Islamist, the lack of political freedoms, the abuse of human rights, and the concentration of power and wealth in the hands of small elite are some of the main underlying causes of the failure of the Arab political order – and of the ongoing uprising against it.

In Sudan in particular, these ailments have finally led to its breakup. The political system in Sudan, like the systems in some other Arab countries, has evolved from three military coups d’etats in the last 55 years of independence.

It was only natural that the system could not deal with the country’s diversity. This gave a golden opportunity to foreign interference and eventually division.

It is only legitimate for the people of the new state of South Sudan to celebrate their independence, but it is also a critical point, while Arab uprisings are demanding freedom and justice, to remember that we cannot establish a better Arab order without embracing diversity and pluralism, instead of narrow nationalist or religious ideologies that have only served as tools for dictators. 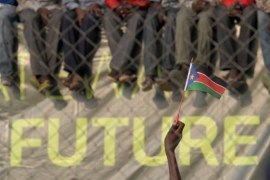 People & Power travelled to Southern Kordofan for an exclusive interview with the leader of the SPLA rebels there. 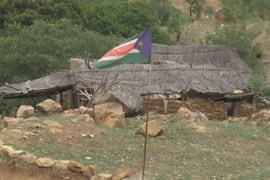 As South Sudan celebrates, the Nuba people of Southern Kordofan are preparing for war. 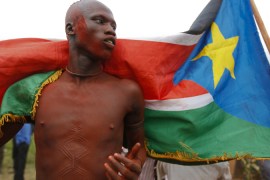 After decades of conflict and millions of deaths, Africa’s newest nation declares independence. 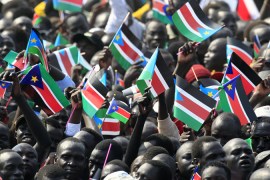