Barack Obama gave a major speech on the Middle East on Thursday, May 19, and it is clear from the subsequent commentary that he impressed few people. The main reason for this is that he did not say much new or indicate that there would be any serious changes in US policy in the region. It was essentially more of the same with some tweaking here and there. Nevertheless, he did manage to anger some people. For example, Israel’s hard-line supporters were outraged that he said: “Palestine should be based on the 1967 lines with mutually agreed swaps.” For them, the 1967 borders are “Auschwitz borders” and thus can never serve as a basis for negotiations.

Many Palestinians, on the other hand, did not like Obama’s assertion that it made little sense for them to go to the UN General Assembly this September and win recognition for a Palestinian state based on the 1967 borders. Surely they also noticed that shortly after saying “every state has the right to self-defence, and Israel must be able to defend itself,” the president said that the Palestinians would have to be content with “a sovereign non-militarised state,” which means that they would not be able to defend themselves against Israel – or any other state for that matter. Hypocrisy appears to be wired into the DNA of US foreign policy makers.

Obama’s failure to impress and move US Middle East policy in new directions raises the intriguing question: Did he blow an opportunity to give a truly important speech at what appears to be a plastic moment in history? I think not. The sad fact is that Obama has remarkably little manoeuvre room on the foreign policy front. The most important item on his agenda is settling the Israeli-Palestinian conflict, and there he knows what has to be done: Push both sides toward a two-state solution, which is the best outcome for all the parties, including the United States. Indeed, he has been trying to do just that since he took office in January 2009. But the remarkably powerful Israel lobby makes it virtually impossible for him to put meaningful pressure on Israeli Prime Minister Benjamin Netanyahu, who is committed to creating a Greater Israel in which the Palestinians are restricted to a handful of disconnected and impoverished enclaves. And Obama is certainly not going to buck the lobby – with the 2012 presidential election looming larger every day.

In addition to his problems with Israel and the lobby, Obama has little influence over events in the broader Middle East. The Arab Spring, which Obama fully embraced in his speech, happened in spite of US foreign policy, not because of it. After all, Washington has played a key role for decades in keeping friendly dictators such as Hosni Mubarak in power. And, not surprisingly, the Obama administration has remained quiet while Saudi and Bahrani security forces have been crushing the protestors in Bahrain. Why? Because the US Navy’s 5th Fleet is stationed in Bahrain and we have excellent relations with its authoritarian leaders. On top of all this, the US military is pinned down in messy wars in Afghanistan, Iraq and now Libya. Not surprisingly, Obama spends a great deal of time thinking about how to manage these conflicts, which leaves little time and room for bold new policy initiatives. Finally, the administration’s hard-nosed policy for dealing with Iran’s nuclear enrichment program is not working, but the president seems unwilling (or unable because of pressure from Israel and its lobbyists) to countenance a new approach for dealing with Tehran.

The bottom line is that the US is in deep trouble in the Middle East and needs new policies for that region. But regrettably there is little prospect of that happening anytime soon. All of this is to say that there was no way that Obama could do anything but disappoint with Thursday’s speech, because he is trapped in an iron cage.

John J Mearsheimer is the R Wendell Harrison Distinguished Service Professor of Political Science at the University of Chicago and author of The Israel Lobby And US Foreign Policy. 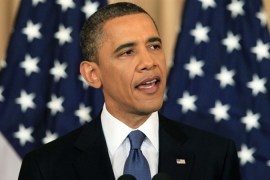 A look at the US administration’s policy towards the Arab Spring. 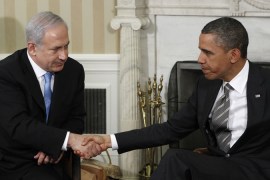 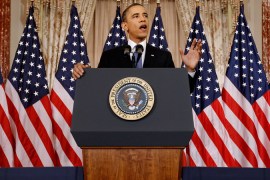 Emperor Obama vs the Arab people

Despite calling for change in some parts of the Middle East, the US president reaffirmed the status quo where it counts. 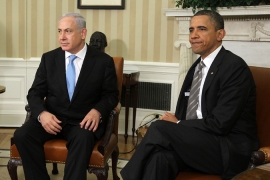