On the surface it appears that president Obama has given up on the Israeli-Palestinian peace process and, frankly, given the evidence, it is difficult imagining that there is something different beneath the surface. To wit:

Special Envoy George Mitchell resigned, clearly angry at the lack of support his peace efforts received from the White House – and his resignation letter was about as curt and cold as any in recent memory. The announcement of his resignation followed reports that the president’s Thursday speech on the Middle East will, amazingly, say virtually nothing about the Israeli-Palestinian conflict.

A day after Mitchell’s resignation came news that the president had decided that he will speak at this month’s AIPAC conference, the traditional setting for pandering to the Israeli government and, more significantly, to Israel-centred political donors.

The most significant sign that the president has abandoned any pretence of being an “honest broker” in favour of gung-ho support for the status quo came in February, when Obama instructed UN ambassador Susan Rice to veto a Security Council resolution condemning Israeli settlement expansion.

The resolution incorporated Obama’s own policy on settlements, so the decision to veto it – the US cast the only no vote – sent a clear signal that, at least until after November 2012, the Obama administration intends to avoid deviation from the AIPAC/Netanyahu blueprint.

This seeming decision to go “all AIPAC, all the time” would be jarring even if 2011 were not the year of the Arab Spring. Just weeks ago, the administration was celebrating Arab democracy and even the fall of our long time ally, Hosni Mubarak. Now it is blatantly adopting a policy that deeply grieves the very Arab democrats it supposedly champions.

The lobby’s (and, apparently, the administration’s) response to that would be that the Arab Spring was not about Israel/Palestine, that not one demonstrator took to the streets to protest Israel’s continued occupation of the West Bank and East Jerusalem as well as the de facto occupation (and blockade) of Gaza.

And that is true. All the Arab revolutions were local. But, as the administration surely knows, the one non-local issue that all Arab democrats care about is the continued occupation. And why not?

After all, the ultimate in non-democracy is having one’s life controlled, not by a domestic despot, but by a foreign government.

The president knows that hatred for the occupation is common to all Muslims – Iranian, Indonesian, Egyptian, Iraqi, whatever, and with good reason (add to that list Israeli moderates, who hate what the occupation is doing, not only to Palestinians, but to their country).

Beyond all that, any US president has to consider what the US military thinks about the occupation. It’s not just general Petraeus who believes that the occupation is a threat to US national security or that it endangers our personnel throughout the Muslim world and our energy supplies. That is a common view among the brass and the civilians alike.

In short, there is nothing good about perpetuating the occupation, and president Obama knows it. On the contrary, the occupation (and the illegal settlements that are its symbol) is a dangerous blight on Arabs, Israelis, and the United States.

So what accounts for president Obama’s seeming policy of indifference?

That is a question that doesn’t need any answer beyond the fact that at the very moment, the White House is abandoning peacemaking – the president is rushing to AIPAC to deliver the news in person. America’s Middle East policy is all about appeasing a few dozen AIPAC-connected donors (no, it is not about the “Jewish vote”, which is consistently Democratic – average 75 per cent – based around domestic issues, not the Middle East).

The president seems to be going out of his way to make sure everyone understands that. It is as if he were saying, “With AIPAC donors – and Democrats in Congress who get their marching orders from AIPAC – what choice do I have? I’m boxed in.”

But why would he do that?

Why would he want to send the message that he can’t implement the policies he wants to because he is trapped by special interests? Just maybe, he wants our help.

In 2007, the day after Obama declared his candidacy for president, I met with him in his office (I was then working for Israel Policy Forum). Obama listened carefully while I explained why it was critical that he be an “honest broker” on Israel-Palestinian issues. Nothing I said, including my opinions of AIPAC’s influence, would surprise anyone who reads my columns.

The bottom line was that the occupation was terrible for the United States, for Israel, and most of all for the Palestinians, and that he should understand that the status quo lobbyists who defend everything Israel does are not representative of the Jewish community or anyone else.

Obama listened, cupped his ear, and said, “I can’t hear you.”

I didn’t understand; I was sitting right next to him.

He then said: “No, not literally. I mean that I don’t hear from people like you. But I hear from AIPAC [he then named the local AIPAC leader in Chicago] every week. I’m going to be president and, when I am, it is your job – you and all the people who feel the way you do – to make sure I hear that message. You cannot simply rely on the belief that you are right. You need to raise your voice so that I hear you and not just them.”

So maybe, just maybe, the president wants us to shout and holler about what appears to be a sell-out to AIPAC. After all, he is making no attempt to cover up what he’s doing or why he’s doing it. He only hears one voice.

Maybe Obama’s latest actions are a cry for help.

Yes, it’s just a theory. But it is infinitely better than thinking Obama actually believes that AIPAC’s status quo is in America’s interest. It just is not possible that this president could believe that.

It’s time to raise our voices so Obama can hear us, whether he still wants us to or not. 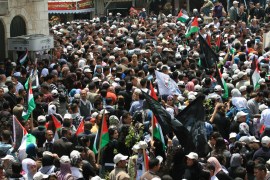 Israeli troops clamp down on ‘Nakba’ protest at Qalandia

In the town of Qalandia, hundreds of Palestinians gathered to mark the 63rd anniversary of the Nakba “catastrophe”. 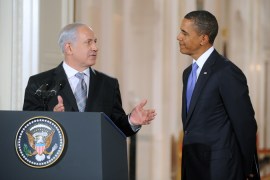 US-Israeli relations: Obama back on top?

With the death of Osama bin Laden, President Obama gains political power. But will he use it stand up to Israel? 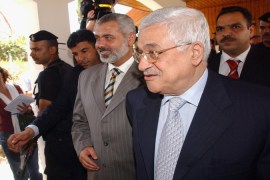 Who cares if Hamas recognises Israel?

Abbas, as head of the PLO, will be negotiating with Israel – not Hamas. So why is Israel rejecting a unity government? 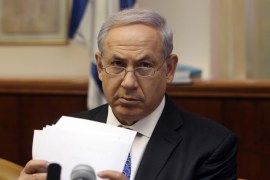 As Arabs across the region struggle for freedom and democracy, Israeli law seems to be headed in the opposite direction.