The Arab revolutions are not only shaking the structure of tyranny to the core – they are shattering many of the myths about the Arab region that have been accumulating for decades. Topping the list of dominant myths are those of Arab women as caged in, silenced, and invisible. Yet these are not the types of women that have emerged out of Tunisia, Egypt, or even ultra-conservative Yemen in the last few weeks and months.

Not only did women actively participate in the protest movements raging in those countries, they have assumed leadership roles as well. They organised demonstrations and pickets, mobilised fellow citizens, and eloquently expressed their demands and aspirations for democratic change.

Like Israa Abdel Fatteh, Nawara Nejm, and Tawakul Karman, the majority of the women are in their 20s and 30s. Yet there were also inspiring cases of senior activists as well: Saida Saadouni, a woman in her 70s from Tunisia,  draped the national flag around her shoulders and partook in the Qasaba protests which succeeded in toppling M. Ghannouchi’s provisional government. Having protested for two weeks, she breathed a unique revolutionary spirit into the thousands who congregated around her to hear her fiery speeches. “I resisted French occupation. I resisted the dictatorships of Bourguiba and Ben Ali. I will not rest until our revolution meets its ends, for your sakes my sons and daughters, not for mine,” said Saadouni.

Whether on the virtual battlefields of the Internet or the physical protests in the streets, women have been proving themselves as real incubators of leadership. This is part of a wider phenomenon characteristic of these revolutions: The open politics of the street have bred and matured future leaders. They are grown organically in the field, rather than being imposed upon from above by political organisations, religious groups, or gender roles.

Another stereotype being dismantled in action is the association of the Islamic headscarf with passivity, submissiveness, and segregation. Among this new generation of prominent Arab women, the majority choose to wear the hijab. Urbanised and educated, they are no less confident or charismatic than their unveiled sisters. They are an expression of the complex interplay of Muslim culture, with processes of modernisation and globalisation being the hallmark of contemporary Arab society.

This new model of home grown women leaders, born out of revolutionary struggle, represents a challenge to two narratives, which, though different in detail, are similar in reference to the myth of Arab cultural singularity; they both dismiss Arab women as inert creatures devoid of will-power.

The first narrative – which is dominant in conservative Muslim circles – sentences women to a life of childbearing and rearing; women are to live in the narrow confines of their homes at the mercy of their husbands and male relatives. Their presence must revolve around notions of sexual purity and family honour; reductionist interpretations of religion are looked upon for justification.

The other view is espoused by Euro-American neo-liberals, who view Arab and Muslim women through the narrow prism of the Taliban model: Miserable objects of pity in need of benevolent intervention from intellectuals, politicians, or even the military. Arab women await deliverance from the dark cage of veiling to a promised garden of enlightenment.

Arab women are rebelling against both models: They are seizing the reigns of their own destinies by liberating themselves as they liberate their societies from dictatorship. The model of emancipation they are shaping with their own hands is one defined by their own needs, choices, and priorities – not anyone else’s.

Although there may be resistance to this process of emancipation, Tahrir Square and Qasaba are now part of the psyche and formative culture of Arab women. Indeed, they are finally given a voice to their long-silenced yearnings for liberation from authoritarianism – both political and patriarchal.

Soumaya Ghannoushi is a freelance writer specialising in the history of European Perceptions of Islam. Her work has appeared in a number of leading British papers including the Guardian and the Independent. 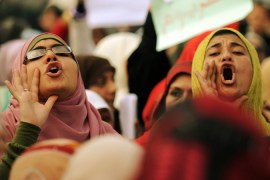 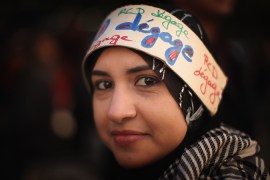 In a regional breakthrough, parties must present equal numbers of male and female candidates in Tunisia’s July vote. 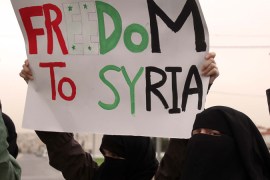 Hundreds of women march after raid by security forces on town of Baida leads to mass arrests.

The role of the army in Egypt’s new politics