Barack Obama, the US president, has been much criticised for the way he has handled revolutionary changes in North Africa and the Middle East. Actually, he has not handled them very much, at least not in public.

That is precisely the problem for armchair warriors watching events unfold on their computer and television screens in Washington and New York. They want Obama to handle things more.

Instead of taking a cautious approach, and letting the demonstrators in Iran, Tunisia, Egypt, Libya, Bahrain, Yemen, and other places do the shouting, they want him to talk tough, or, better yet, to send in the US Air Force and blast Gaddafi’s jet fighters and helicopter gunships out of the sky.

They want Obama to tell those dictators to quit right now, or else ….

Or else what, exactly? To be sure, the US government has coddled too many brutal dictators over the last half-century. During the Cold War, dictators benefited from American largess as long as they were anti-Communist (“our bastards”). Middle Eastern dictators were showered with money and arms if they refrained from attacking Israel and kept the Islamists down.

In both cases, these cozy relationships were maintained for far too long. In Arab countries, they only helped to inflame Islamic extremism.

And yet, in order to begin a transition to more democratic forms of government, it helps to be a client state of the US.

During the 1980s, South Korea, the Philippines and Taiwan managed to ditch their dictators, partly because they were utterly dependent on US arms and money.

When the Cold War was drawing to a close, anti-Communism no longer guaranteed US protection. So, when Koreans, Filipinos, and Taiwanese rose up against their rulers, the US, albeit belatedly, was in a position to tell their military clients to back off. In a discreet way, something like this probably happened in Egypt as well.

Unfortunately, this type of pressure could not work in China when its people demanded what other Asians had won. Both the Chinese Communist Party and the People’s Liberation Army could survive without US patronage. The same is true of the semi-theocratic regime in Iran.

If Gaddafi finally goes, it will not be because his army is dependent on the US.

But there is another problem with the US taking a leading role in political revolts in the Middle East. Some of the same people who accuse Obama today of being “soft” were keen promoters of the war in Iraq.

Back then, they expected that the “shock and awe” of US force would not only topple the dictator (which turned out to be true), but also that the US-led invasion would be greeted with enthusiasm by the liberated Iraqis, who would then herald a new democratic era in the Middle East.

One casualty of that brutal enterprise, apart from the roughly 100,000 Iraqis who have died and the millions more who have become refugees, is trust in the US as a force for good. Operation Iraqi Freedom, not to mention Operation Enduring Freedom in Afghanistan, gave American efforts to promote democracy a terrible name. People want freedom, but not when it comes from the barrel of a US gun.

So far, anti-American rhetoric has been remarkably muted in the uprisings sweeping the Middle East.

The cynical way in which despots try to discredit all opposition as the work of foreign agents no doubt plays a part in this silence. But so does Obama’s public discretion.

His conciliatory speech in Cairo on June 4, 2009, much derided by hawks in the US, together with his general lack of bluster, created enough space for the opponents of Middle Eastern dictators to rebel without being tainted in any way by foreign intervention. It is their show, and so it should be.

But that is not to say that the US must always be passive. In fact, it has not been. Where America’s influence counts, as in the case of the Egyptian military, it has been used. And Obama has made his support of democratic aspirations clear, to the dismay of allies like Israel and Saudi Arabia. However, as recent history has shown, toppling strongmen is only the beginning of the democratisation process.

Building institutions that guarantee not only political liberties, but also the protection of minorities, as well as other liberal conditions, is difficult enough in countries where such institutions had once existed, as in post-communist central Europe.

It will be harder in countries where they did not, or where the economy remains largely in the hands of the armed forces. Armed Anglo-American intervention, especially if it is not sanctioned by the United Nations, would do much to undermine liberals and democrats, who need all the credibility they can get.

There are no doubt some among the demonstrators who would like Obama to be more strident in his support of their aims. Some even call for more active US assistance.

There may be things that Western powers can do to alleviate the suffering, by offering aid to refugees, for example, or use the latest technology to keep lines of information open.

But American hawks want what most opposition leaders in Libya have expressly rejected. They want the US to show leadership, which is the last thing aspiring democrats need right now.

People in the Middle East and North Africa have been led by the West, or by Western-backed dictators, for long enough. They must find their own way to freedom. Obama seems to understand this. Which is why he has done all right.

Ian Buruma is professor of Democracy and Human Rights at Bard College. His latest book is Taming the Gods: Religion and Democracy on Three Continents. 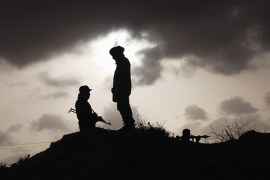 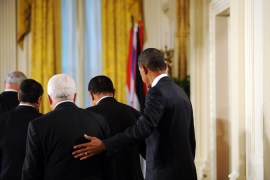 A new idea of truth

Opinion: The US in a funk

Opinion: Is the European dream over?