On January 29, Omar Suleiman, Egypt’s top spy chief, was anointed vice president by tottering dictator, Hosni Mubarak. By appointing Suleiman, part of a shake-up of the cabinet in an attempt to appease the masses of protesters and retain  his own grip on the presidency, Mubarak has once again shown his knack for devilish shrewdness. Suleiman has long been favoured by the US government for his ardent anti-Islamism, his willingness to talk and act tough on Iran – and he has long been the CIA’s main man in Cairo.

Mubarak knew that Suleiman would command an instant lobby of supporters at Langley and among ‘Iran nexters’ in Washington – not to mention among other authoritarian mukhabarat-dependent regimes in the region. Suleiman is a favourite of Israel too; he held the Israel dossier and directed Egypt’s efforts to crush Hamas by demolishing the tunnels that have functioned as a smuggling conduit for both weapons and foodstuffs into Gaza.

According to a WikiLeak(ed) US diplomatic cable, titled ‘Presidential Succession in Egypt’, dated May 14, 2007:

“Egyptian intelligence chief and Mubarak consigliere, in past years Soliman was often cited as likely to be named to the long-vacant vice-presidential post. In the past two years, Soliman has stepped out of the shadows, and allowed himself to be photographed, and his meetings with foreign leaders reported. Many of our contacts believe that Soliman, because of his military background, would at least have to figure in any succession scenario.”

From 1993 until Saturday, Suleiman was chief of Egypt’s General Intelligence Service. He remained largely in the shadows until 2001, when he started taking over powerful dossiers in the foreign ministry; he has since become a public figure, as the WikiLeak document attests. In 2009, he was touted by the London Telegraph and Foreign Policy as the most powerful spook in the region, topping even the head of Mossad.

In the mid-1990s, Suleiman worked closely with the Clinton administration in devising and implementing its rendition program; back then, rendition involved kidnapping suspected terrorists and transferring them to a third country for trial. In The Dark Side, Jane Mayer describes how the rendition program began:

“Each rendition was authorised at the very top levels of both governments [the US and Egypt] … The long-serving chief of the Egyptian central intelligence agency, Omar Suleiman, negotiated directly with top [CIA] officials. [Former US Ambassador to Egypt Edward] Walker described the Egyptian counterpart, Suleiman, as ‘very bright, very realistic’, adding that he was cognisant that there was a downside to ‘some of the negative things that the Egyptians engaged in, of torture and so on. But he was not squeamish, by the way’. (p. 113).

“Technically, US law required the CIA to seek ‘assurances’ from Egypt that rendered suspects wouldn’t face torture. But under Suleiman’s reign at the EGIS, such assurances were considered close to worthless. As Michael Scheuer, a former CIA officer [head of the al-Qaeda desk], who helped set up the practise of rendition, later testified, even if such ‘assurances’ were written in indelible ink, ‘they weren’t worth a bucket of warm spit’.”

Under the Bush administration, in the context of “the global war on terror”, US renditions became “extraordinary”, meaning the objective of kidnapping and extra-legal transfer was no longer to bring a suspect to trial – but rather for interrogation to seek actionable intelligence. The extraordinary rendition program landed some people in CIA black sites – and others were turned over for torture-by-proxy to other regimes. Egypt figured large as a torture destination of choice, as did Suleiman as Egypt’s torturer-in-chief. At least one person extraordinarily rendered by the CIA to Egypt — Egyptian-born Australian citizen Mamdouh Habib — was reportedly tortured by Suleiman himself.

In October 2001, Habib was seized from a bus by Pakistani security forces. While detained in Pakistan, at the behest of American agents, he was suspended from a hook and electrocuted repeatedly. He was then turned over to the CIA, and in the process of transporting him to Egypt he endured the usual treatment: his clothes were cut off, a suppository was stuffed in his anus, he was put into a diaper – and ‘wrapped up like a spring roll’.

In Egypt, as Habib recounts in his memoir, My Story: The Tale of a Terrorist Who Wasn’t, he was repeatedly subjected to electric shocks, immersed in water up to his nostrils and beaten. His fingers were broken and he was hung from metal hooks. At one point, his interrogator slapped him so hard that his blindfold was dislodged, revealing the identity of his tormentor: Suleiman.

Frustrated that Habib was not providing useful information or confessing to involvement in terrorism, Suleiman ordered a guard to murder a shackled prisoner in front of Habib, which he did with a vicious karate kick. In April 2002, after five months in Egypt, Habib was rendered to American custody at Bagram prison in Afghanistan – and then transported to Guantanamo. On January 11, 2005, the day before he was scheduled to be charged, Dana Priest of the Washington Post published an exposé about Habib’s torture. The US government immediately announced that he would not be charged and would be repatriated to Australia.

A far more infamous torture case, in which Suleiman also is directly implicated, is that of Ibn al-Sheikh al-Libi. Unlike Habib, who was innocent of any ties to terror or militancy, al-Libi was allegedly a trainer at al-Khaldan camp in Afghanistan. He was captured by the Pakistanis while fleeing across the border in November 2001. He was sent to Bagram, and questioned by the FBI. But the CIA wanted to take over, which they did, and he was transported to a black site on the USS Bataan in the Arabian Sea, then extraordinarily rendered to Egypt. Under torture there, al-Libi “confessed” knowledge about an al-Qaeda–Saddam connection, claiming that two al-Qaeda operatives had received training in Iraq for use in chemical and biological weapons. In early 2003, this was exactly the kind of information that the Bush administration was seeking to justify attacking Iraq and to persuade reluctant allies to go along. Indeed, al-Libi’s “confession” was one the central pieces of “evidence” presented at the United Nations by then-Secretary of State Colin Powell to make the case for war.

As it turns out, that confession was a lie tortured out of him by Egyptians. Here is how former CIA chief George Tenet describes the whole al-Libi situation in his 2007 memoir, At The Center Of The Storm:

“We believed that al-Libi was withholding critical threat information at the time, so we transferred him to a third country for further debriefing. Allegations were made that we did so knowing that he would be tortured, but this is false. The country in question [Egypt] understood and agreed that they would hold al-Libi for a limited period. In the course of questioning while he was in US custody in Afghanistan, al-Libi made initial references to possible al-Qa’ida training in Iraq. He offered up information that a militant known as Abu Abdullah had told him that at least three times between 1997 and 2000, the now-deceased al-Qa’ida leader Mohammad Atef had sent Abu Abdullah to Iraq to seek training in poisons and mustard gas.

“Another senior al-Qa’ida detainee told us that Mohammad Atef was interested in expanding al-Qa’ida’s ties to Iraq, which, in our eyes, added credibility to the reporting. Then, shortly after the Iraq war got under way, al-Libi recanted his story. Now, suddenly, he was saying that there was no such cooperative training. Inside the CIA, there was sharp division on his recantation. It led us to recall his reporting, and here is where the mystery begins.

“Al-Libi’s story will no doubt be that he decided to fabricate in order to get better treatment and avoid harsh punishment. He clearly lied. We just don’t know when. Did he lie when he first said that al-Qa’ida members received training in Iraq – or did he lie when he said they did not? In my mind, either case might still be true. Perhaps, early on, he was under pressure, assumed his interrogators already knew the story, and sang away. After time passed and it became clear that he would not be harmed, he might have changed his story to cloud the minds of his captors. Al-Qa’ida operatives are trained to do just that. A recantation would restore his stature as someone who had successfully confounded the enemy. The fact is, we don’t know which story is true, and since we don’t know, we can assume nothing. (pp. 353-354)”

Al-Libi was eventually sent off, quietly, to Libya – though he reportedly made a few other stops along the way – where he was imprisoned. The use of al-Libi’s statement in the build-up to the Iraq war made him a huge American liability once it became clear that the purported al-Qaeda–Saddam connection was a tortured lie. His whereabouts were, in fact, a secret for years, until April 2009 when Human Rights Watch researchers investigating the treatment of Libyan prisoners encountered him in the courtyard of a prison. Two weeks later, on May 10, al-Libi was dead, and the Gaddafi regime claimed it was a suicide.

According to Evan Kohlmann, who enjoys favoured status among US officials as an ‘al-Qaeda expert’, citing a classified source: ‘Al-Libi’s death coincided with the first visit by Egypt’s spymaster Omar Suleiman to Tripoli.’

Kohlmann surmises and opines that, after al-Libi recounted his story about about an al-Qaeda–Saddam-WMD connection, “The Egyptians were embarassed by this admission – and the Bush government found itself in hot water internationally. Then, in May 2009, Omar Suleiman saw an opportunity to get even with al-Libi and travelled to Tripoli. By the time Omar Suleiman’s plane left Tripoli, Ibn al-Sheikh al-Libi had committed ‘suicide’.”

As people in Egypt and around the world speculate about the fate of the Mubarak regime, one thing should be very clear: Omar Suleiman is not the man to bring democracy to the country. His hands are too dirty, and any ‘stability’ he might be imagined to bring to the country and the region comes at way too high a price. Hopefully, the Egyptians who are thronging the streets and demanding a new era of freedom will make his removal from power part of their demands, too.

Lisa Hajjar teaches sociology at the University of California – Santa Barbara and is a co-editor of Jadaliyya.

This article first appeared on Jadaliyya. 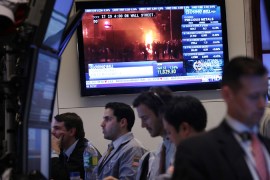 The hidden roots of Egypt’s despair

The economic crisis is driving political protests sparked in part by US financial speculation. 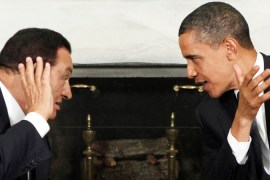 US Mideast policy has been irrelevant and fails to accommodate the current movement that is sweeping across the region. 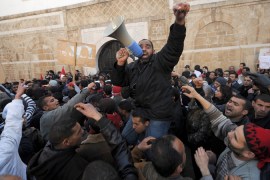 While scholars dispute whether Tunisia serves as model Arab world uprising, many agree that it was near-perfect US ally.

State of the drones

International law, the Gaza war, and Palestine’s state of exception