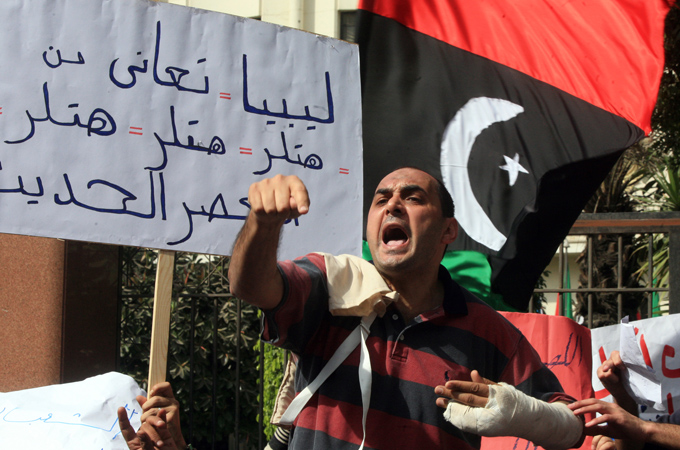 Muammar Gaddafi’s defiant speech, refusing to let go of power even after his army massacred Libyans in their hundreds to suppress their February 2011 uprising, will go down in history as the rambling soliloquy of a mad colonel who had so deeply fallen into the very depth of his own delusions that only a Gabriel García Márquez can conjure up in a revised version of the Autumn of the Patriarch.

The rambling soliloquy, at once sonorous and lethargic, would have been exceedingly sad were it not so murderous; the wretched tyrant stood there Lear incarnate, mumbling in fear and fury upon the heath of his own tormented mind, entirely oblivious to what had befallen his land, threatening Libya:

I will have such revenges on you

That all the world shall — I will do such things —

What they are, yet I know not: but they shall be

The terrors of the earth!

I have full cause of weeping; but this heart

Shall break into a hundred thousand flaws,

“We’re witnessing,” as the Libyan novelist Hisham Matar has recently said of Gaddafi’s brutal crackdown of his own people, “the violent lashings of a dying beast.” Cries and whispers have now become thunderous obscenities.

The eloquent discourses of defiance against the corrupting condition of European coloniality reached their poetic crescendo last century with Léopold Sédar Senghor, Aimé Césaire, and Albert Memmi, and came to a conclusion with the theoretical passion and precision of Frantz Fanon, Edward Said, and Gayatri Spivak. After the feverish gibberish of Muammar Gaddafi—the decadent and defiant relic of domestic tyranny picking up from European colonial domination—the colonial discourse has finally degenerated into mere Tourette syndrome.

Rambling ceaselessly about how he was “a fighter, a revolutionary from tents,” and that he “will die as a martyr at the end,” and then threatening “I have not yet ordered the use of force . . . when I do, everything will burn,” Gaddafi stood there in the midst of the rubbles of a US-bombed building like Marquez’s “Patriarch,” “the All Pure,” “the Magnificent,” “Zacarias,” like his literary prototype somewhere between 107 and 232 years old: paranoid, ruthless, superstitious, broken, fallen, pathetic. Ben Ali and Mubarak’s exits were in comparison princely. From Ayatollah Khamenei to Ali Abdullah Saleh, other tyrants in the neighborhood should look at that video and wander.

After Gaddafi’s speech on February 22, the discourse of postcoloniality as we have known it over the last two hundred years has come to an end—not with a bang but with a whimper. After that speech we need a new language—the language of postcoloniality, having had a false dawn when the European colonial powers packed and left, has just started. After forty-two years of unsurpassed banality and cruelty, he is among the last vestiges of a European colonial destruction of not just world material resources but far more crucial of a liberated moral imagination. There are a number of these relics still around. Two of them have been deposed. But still the criminal cruelty and the identical gibberish of many more—from Morocco to Iran, from Syria to Yemen—are to be taught the dignity of a graceful exit, an ennobling silence.

Like Tunisia and Egypt, Libya has arisen in a collective act of deferred postcolonial defiance, to demand and exact what is Libyans’—their national sovereignty, predicated on democratic institutions, rule of law, and the human decency of a just economic distribution of their national resources and the wealth they generate: all the very prerequisites of a dignified life that was due to them in the gruesome aftermath of the obscene and ludicrous Italian colonialism (1911-1951). But like all other Europeans, Italians packed and left Libya having not just plundered its natural resources. They also left it bereft of any enduring institution of democracy. Gaddafi was the nativist aftertaste of European colonialism—the bastard son of its militarism, charlatanism, barefaced barbarity.

The last vestiges of European colonialism that robbed nations of their natural resources, enslaved them as abused labor in order to fortify the material foundations of now a globalized capitalism, fomented tribal and sectarian hostilities—Arabs and Persian, Sunnis and Shi’is, Muslims and Hindus, Muslims and Christians—left no possibility of any enduring institution of political modernity. A functioning democracy is what was supposed to have happened in the aftermath of European colonial barbarism. But charismatic lunacies—ranging from Gaddafi, Mugabe, and Ahmadinejad back to Saddam Hussein, Ayatollah Khomeini, and Idi Amin—is what was left behind.

‘Awakening from a nightmare’

Today we are awakening from a nightmare. We have been dreaming for this day for a lifetime, as did our parents, with the same surety that we are determined that our children will never know the indignity of being ruled by the most pernicious of our fears. What we are witnessing around the Arab and Muslim world is the birth of the first postcolonial nations, beyond the post-independent pathologies of European colonialism, when native tyrants replaced their European counterparts and for decades abused our noble anger, banked on our fears, plundered our resources, wasted our hopes, robbed us of our democratic dignity, and delayed any meaningful formation of sovereign and liberated nation-states. So early when the dawn has broken, such long and arduous days ahead, and so full of anxious hope we are—this time for real.

For forty-two years Gaddafi ruled Libya with charismatic banality and carnivalesque cruelty. To save his throne his corrupt army (minus the courageous who have deserted and joined their people) has carpet-bombed Libyans with the military machinery that American and British arms manufacturers have sold him. For just a little shy of half a century, as Marwan Bishara has noted, “he’s used political blackmail and financial bribes and unveiled threats of force to stay at the helm of the regime. In the process, much of the country’s wealth was wasted. And so was any chance of development as his dictatorship suppressed pluralism, creativity and freedom of expression.”

When Italians left Libya in 1951, some historians believe almost 50% of its population was killed in the course of their anti-colonial struggles. Today scarcely any Libyan remembers a life without Gaddafi—thus rendering ever more powerful their dreams of liberation.

All their differences notwithstanding, the specific sites of these uprisings in the Arab and Muslim world and beyond are connected by the common denominator of a shared and sustained struggle. What is happening in Libya, Tunisia, Egypt, Bahrain, or Yemen could not possibly be separated from what has happened in the Arab and Muslim world over the last half a century. From the armed robbery of Palestine, to the betrayed dreams and aspirations of the Iranian revolution of 1979, to the military invasion and colonial occupation of Afghanistan and Iraq – all are integral to the democratic aspirations that have now swept across our homelands. We as a people are defying the politics of despair that more than half a century of colonial and imperial domination has imposed on us.

What as a result we are witnessing is not just the end of the delusion of “the end of history” and “the clash of civilization” that the prognosticators and strategists of US imperialism were dreaming but in fact the moral contours of a new imaginative geography of liberation, mapped far from the false and falsifying binary of “Islam and the West,” or “the West and the Rest.”

The US and Israel may think by having Omar Suleiman or the compromised upper echelons of the Egyptian army in charge of the democratic transition in Egypt they will have everything under their control. They will not. They may think “the Turkish model” would be an ideal blueprint for them to hope and expect. But these uprisings we are witnessing will not subside.

They are positing an open-ended hermeneutics of political possibilities that will remap the world—far even beyond the obscenity of Hugo Chavez ignoring the brutalities of the Islamic Republic and being a frequent flier to Tehran, or even the more absurd banality of the Nicaraguan president Daniel Ortega, who has just called Gaddafi to express his solidarity with him. That kind of corrupt “anti-imperialism” has now lost to the rising democratic will of nations that will demand and exact their rights from domestic tyranny and imperial hubris alike.

What we are witnessing is a new planetary awakening far beyond Arab or any other ethnic nationalism. The world is giving birth to a new geography of itself. We must allow for and prepare for a different mode of postcolonial thinking (not yet dreamt by Bengali intellectuals) that will allow the synergy amongst these revolutionary uprisings to work themselves out and stop assimilating them backward into arrested jingoism of one sort or another.

The imaginative geography of this uprising maps out a whole new topography of world for us to navigate and discover. Though every Arab from Morocco to Yemen has every reason to be proud of what the world is witnessing in awe and admiration, neither pan-Arabism nor any other colonially racialized category is a sufficient hermeneutic parallax within which to understand, interpret, and advance forward what is today happening in our liberated world. The liberating geography of this uprising goes far beyond the Arab and even Muslim world. From Senegal to Djibouti similar uprisings are brewing. The commencement of the Green Movement in Iran almost two years before the uprising in the Arab world has had far reaching implications deep into Afghanistan and Central Asia, and today as far as China there are official fears of a “Jasmine Revolution.”

Giving birth to ourselves beyond our colonial condition we are the fortunate witness of the dawn of a whole new discovery of who and what we are—from Morocco to Afghanistan, from Turkey to Yemen, from Central Asia to the extended domains of the Indian ocean. We must simply wake up, catch our breath, and wash our eyes. We are the discoverers of a brand new world—a world whose geography is ours to map, over against the colonial map we have inherited and are now finally leaving behind. Our deferred defiance against domestic tyranny and globalized imperialism at one and the same time is the dawn of a whole new horizon on world history.

Hamid Dabashi is Hagop Kevorkian Professor of Iranian Studies and Comparative Literatur at Columbia University in New York, and the author of among other book, Post-Orientalism: Knowledge and Power ain Time of Terror (2008).