The slow collapse of Palestinian collective leadership institutions in recent years has reached a crisis amid the ongoing Arab revolutions, the revelations in the Palestine Papers, and the absence of any credible peace process.

The Ramallah-based Palestinian Authority (PA) controlled by Mahmoud Abbas and his Fatah faction has attempted to respond to this crisis by calling elections for the Palestinian Legislative Council (PLC) and the PA presidency.

Abbas hopes that elections could restore legitimacy to his leadership. Hamas has rejected such elections in the absence of a reconciliation agreement ending the division that resulted from Fatah’s refusal (along with Israel and the PA’s western sponsors, especially the United States) to accept the result of the last election in 2006, which Hamas decisively won.

But even if such an election were held in the West Bank and Gaza Strip, it does not resolve the crisis of collective leadership faced by the entire Palestinian people, some ten million distributed between those living in the occupied Gaza Strip and West Bank, inside Israel, and the worldwide diaspora.

There are numerous reasons to oppose new PA elections, even if Hamas and Fatah were to sort out their differences. The experience since 2006 demonstrates that democracy, governance and normal politics are impossible under Israel’s brutal military occupation.

The Palestinian body politic was divided not into two broad political streams offering competing visions, as in other electoral democracies, but one stream that is aligned with, supported by and dependent on the occupation and its foreign sponsors, and another that remains committed, at least nominally, to resistance. These are contradictions that cannot be resolved through elections.

The Ramallah PA under Abbas today functions as an arm of the Israeli occupation, while Hamas, its cadres jailed, tortured and repressed in the West Bank by Israel and Abbas’ forces, is besieged in Gaza where it tries to govern. Meanwhile, Hamas has offered no coherent political vision to get Palestinians out of their impasse and its rule in Gaza has increasingly begun to resemble that of its Fatah counterparts in the West Bank.

The PA was created by agreement between the Palestine Liberation Organization (PLO) and Israel under the Oslo Accords. The September 13, 1993 “Declaration of Principles” signed by the parties states that:

“The aim of the Israeli-Palestinian negotiations within the current Middle East peace process is, among other things, to establish a Palestinian Interim Self-Government Authority, the elected Council (the “Council”), for the Palestinian people in the West Bank and the Gaza Strip, for a transitional period not exceeding five years, leading to a permanent settlement based on Security Council Resolutions 242 and 338.”

Under the agreement, PA elections would “constitute a significant interim preparatory step toward the realization of the legitimate rights of the Palestinian people and their just requirements”.

Thus, the PA was only ever intended to be temporary, transitional, and its mandate limited to a mere fraction of the Palestinian people, those in the West Bank and Gaza Strip. The Oslo Accords specifically limited the PA’s powers to functions delegated to it by Israel under the agreement.

Therefore, elections for the PLC will not resolve the issue of representation, for the Palestinian people as a whole. Most would not have a vote. As in previous elections, Israel would likely intervene, particularly in East Jerusalem to attempt to prevent even some Palestinians under occupation from voting.

Given all these conditions, a newly elected PLC would only serve to further entrench divisions among Palestinians while also creating the illusion that Palestinian self-governance exists — and can thrive — under Israeli occupation.

A decade and a half after its creation, the Palestinian Authority has proved not to be a step toward the “legitimate rights of the Palestinian people,” but rather a significant obstacle in the way of achieving them.

The PA offers no genuine self-government or protection for Palestinians under occupation, who continue to be victimized, killed, maimed and besieged by Israel with impunity while Israel confiscates and colonizes their land.

The PA never was and cannot be a stand-in for real collective leadership for the Palestinian people as a whole, and PA elections are not a substitute for self-determination.

With the complete collapse of the “peace process” — the final push given by the Palestine Papers — it is time for the PA to have its Mubarak moment. When the Egyptian tyrant finally left office on February 11, he handed power over to the armed forces.

The PA should dissolve itself in a similar manner by announcing that the responsibilities delegated to it by Israel are being handed back to the occupying power, which must fulfill its duties under the Fourth Geneva Convention of 1949.

This would not be a surrender. Rather, it would be a recognition of reality and an act of resistance on the part of Palestinians who would collectively refuse to continue to assist the occupier in occupying them. By removing the fig leaf of “self-governance” masking and protecting from scrutiny Israel’s colonial and military tyranny, the end of the PA would expose Israeli apartheid for all the world to see.

The same message would also go to the European Union and the United States who have been directly subsidizing Israel’s occupation and colonization through the ruse of “aid” to the Palestinians and training for security forces that act as Israeli proxies. If the European Union wishes to continue funding Israel’s occupation, it ought to have the integrity to do it openly and not use Palestinians or the peace process as a front.

Dissolving the PA may cause some hardship and uncertainty for the tens of thousands of Palestinians and their dependents, who rely on salaries paid by the European Union via the PA. But the Palestinian people as a whole — the millions who have been victimised and marginalised by Oslo — would stand to benefit much more.

Handing the PA’s delegated powers back to the occupier would free Palestinians to focus on reconstituting their collective body politic and implementing strategies to really liberate themselves from Israeli colonial rule.

What can a real collective Palestinian leadership look like? Undoubtedly this is a tough challenge. Many older Palestinians recall fondly the heyday of the PLO. The PLO still exists, of course, but its organs have long since lost any legitimacy or representative function. They are now mere rubber stamps in the hands of Abbas and his narrow circle.

Could the PLO be reconstituted as a truly representative body by, say, electing a new Palestine National Council (PNC) — the PLO’s “parliament in exile”? Although the PNC was supposed to be elected by the Palestinian people, in reality that has never happened — in part due to the practical difficulty of actually holding elections across the Palestinian diaspora. Members were always appointed through negotiations among the various political factions and the PNC included seats for independents and representatives from student, women’s and other organizations affiliated with the PLO.

One of the key points of disagreement between Fatah and Hamas has been reform of the PLO in which Hamas would become a member and receive a proportional number of seats on the organization’s various governing bodies. But even if this happened, it would not be the same as having Palestinians choose their representatives directly.

In recent years, “out of country voting” facilities were provided for large Iraqi and Afghan refugee and exile populations for elections sponsored by the powers occupying those countries. In theory, it would be possible to hold elections for all Palestinians, perhaps under UN auspices — including the huge Palestinian diaspora in the Americas and Europe.

The trouble is that any such elections would probably need to rely on the goodwill and cooperation of an “international community” (the US and its allies), which has been implacably opposed to allowing Palestinians to choose their own leaders.

Would the energy and expense of running a transnational Palestinian bureaucracy be worth it? Would these new bodies be vulnerable to the sorts of subversion, cooptation, and corruption that turned the original PLO from a national liberation movement into its current sad status where it has been hijacked by a collaborationist clique?

I do not have definitive answers to these questions, but they strike me as the ones Palestinians ought now to be debating.

In light of the Arab revolutions that were leaderless, another intriguing possibility is that at this stage Palestinians should not worry about creating representative bodies.

Instead, they should focus on powerful, decentralized resistance, particularly boycott, divestment and sanctions (BDS) internationally, and the popular struggle within historic Palestine.

The BDS movement does have a collective leadership in the form of the Boycott National Committee (BNC). However, this is not a leadership that issues orders and instructions Palestinians or solidarity organisations around the world. Rather, it sets an agenda reflecting a broad Palestinian consensus, and campaigns for others to work according to this agenda, largely through moral suasion.

The agenda encompasses the needs and rights of all Palestinians: ending the occupation and colonisation of all Arab territories occupied in 1967; ending all forms of discrimination against Palestinian citizens in Israel; and respecting, promoting and implementing the rights of Palestinian refugees.

The BDS campaign is powerful and growing because it is decentralized and those around the world working for the boycott of Israel — following the precedent of apartheid South Africa — are doing so independently. There is no central body for Israel and its allies to sabotage and attack.

This might be the model to follow: let us continue to build up our strength through campaigning, civil resistance and activism. Two months ago, few could have imagined that the decades old regimes of Tunisia’s Zine el Abidine Ben Ali and Egypt’s Hosni Mubarak would fall — but fall they did under the weight of massive, broad-based popular protests. Indeed, such movements hold much greater promise to end Israel’s apartheid regime and produce a genuine, representative and democratic Palestinian leadership than the kinds of cumbersome institutions created by the Oslo Accords. The end of the peace process is only the beginning.

Ali Abunimah is co-founder of The Electronic Intifada, a policy advisor with the Palestinian Policy Network, and author of One Country: A Bold Proposal to End the Israeli-Palestinian Impasse. 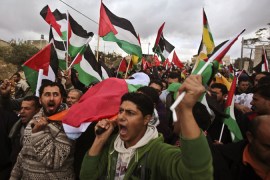 Is the West Bank next?

If Israel refuses to accept a viable peace deal, the revolt sweeping the Arab world will arrive in Palestine. 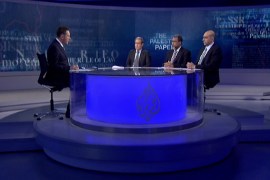 We look at how the media’s role in the release became just as newsworthy as the content they published. 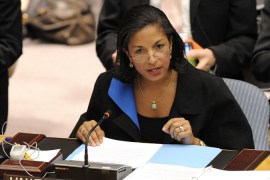 US vetoes UN draft on settlements

Washington blocks resolution condemning Israeli settlements in the Palestinian territories as an obstacle to peace. 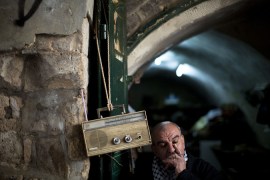 Opinion: Slamming the door to justice