On Sunday, former strongman Manuel Noriega returned to Panama following twenty-plus years in US and French prisons. However, the return to his native country remains as clouded in mystery as the reasons for his initial departure.

The United States invaded Panama on December 20, 1989 in an operation that lasted three weeks. In a speech shortly after the invasion began, President George HW Bush listed four reasons for the operation, including the safeguarding of US troops and their dependents, the defence of human rights and democracy, Noriega’s involvement in drug trafficking and other illegal activities, and the security of the Panama Canal.

While the protection of US troops and their families were a legitimate concern, the threats against them were more a consequence of the escalating tensions than a cause. In particular, tensions flared after a failed October coup attempt in Panama. The deterioration of the human rights situation and the fraudulent May elections were relevant as well, but the imposition of democracy by force has rarely been the motivation behind US policies during the Cold War – or at any other time.

Finally, the security of the Panama Canal was of obvious importance to the US, but it was not scheduled to be turned over to the Panamanians for another decade. On their own, none of the four reasons stated by President Bush provides a sufficient explanation for an intervention that was condemned in both the United Nations General Assembly and the Organisation of American States.

‘Traitor to the Nation’

However, there are several other explanations for the US invasion. Throughout the 1980s, Noriega supported the US with intelligence and logistical assistance used to combat the Farabundo Martí National Liberation Front (FMLN) in El Salvador and the Sandinista National Liberation Front (FSLN) in Nicaragua. But Noriega’s support for the Central American Peace Process, which had called for negotiations, was contrary to US interests. The US preferred a solution that did not leave the FSLN in power and that did not call for an end to foreign meddling in the region. On the other hand, Noriega was not alone in his support for the peace process, and was not one of its main architects.

Other arguments centre on the influence of Panamanian exiles, such as Roberto Eisenmann, Jr. Eisenmann spent most the 1980s in the US lobbying the US Congress to take a tough stance against Noriega. In return, Noriega had the Panamanian congress pass a resolution labelling him a “traitor to the nation”. For some, the US Congress’ tougher stand against Noriega was inconsistent with the approach advocated by President Bush. As head of the Central Intelligence Agency, Bush was very familiar with Manuel Noriega. Others believe it was President Bush’s determination to prove that he was not a wimp that drove the US to war.

I would also argue that, like President Ronald Reagan’s invasion of Grenada in 1983, President Bush likely believed that an operation to remove Noriega would be an easy foreign policy success. The US already had thousands of troops stationed in the Canal Zone and access to bases and airstrips. While Noriega was neither the most repressive dictator nor the most corrupt, he was the most vulnerable to US military force.

In the end, however, there’s no smoking gun. There’s no single explanation for this US invasion, an invasion largely forgotten by the American public.

Now, there’s also the matter of Noriega’s return to Panama. Panamanian President Ricardo Martinelli first requested Noriega’s extradition from the US in 2008. At the time, Noriega was in a Miami prison finishing a 30-year sentence, eventually reduced to 17 for good behaviour, on charges of drug trafficking, racketeering, and money-laundering. He would serve another three years while the US processed extradition requests from France and Panama. Noriega was eventually extradited to France where he was to serve a seven-year sentence on money laundering charges.

At this point, I thought that the United States and the international community were intent on ensuring that Noriega would serve the rest of his life in foreign prisons so as to prevent him from returning to Panama. Some feared that his charisma and connections would somehow enable him to make a successful return to politics. In the end, however, Noriega returns to a country very different from that which he left.

I’m not sure that anyone knows. After initial rumors that he hadn’t actually returned to Panama, authorities wheeled him before cameras upon his arrival at El Renacer (“Rebirth”) Prison. He has already been convicted in absentia for the murders of 11 people. He is set to serve those terms concurrently, which means he could be free at 97 years of age. However, he is likely to face additional murder charges that occurred under his rule now that he is back in Panama.

On the other hand, it’s possible that his stay behind bars will be of limited duration. Panama has a law on the books that allows elderly inmates to serve the remainder of their prison time under house arrest. Victims’ rights groups are outraged at this possibility. For Noriega to take advantage of this benefit, he would have to accept his murder convictions. He would not be able to challenge them in court. It’s difficult to see him accept the rulings even though at 77 years old, he has suffered a stroke and prostate cancer. I would accept house arrest for Noriega if it means that he would accept responsibility for those murders and would ask the people of Panama for mercy.

Michael Shifter, president of the Inter-American Dialogue in Washington, DC, believes that Noriega’s return will provide a sense of “closure” for the people of Panama. I hope so, but I am not entirely convinced. A variety of international news stories covering Noriega’s return to Panama say that there’s little interest among the general public. Today’s generation knows little about the man who ruled between 1983 and 1989. Three-quarters of the population were of a young age during this heyday and have apparently moved on.

It is more likely, but not certain, that some of those who lost family members will gain some closure with new trials, information on the location of the remains of their loved ones, or the simple fact that Noriega will spend the rest of his life behind bars. I’m just not yet convinced that his return will lead to any national reconsideration of his rule, either of how far the country has come (four consecutive free and fair elections, robust economic growth) or how far the country has failed to come (drug trafficking, corruption and money laundering remain serious problems).

Guillermo Sanchez Borbon, co-author of a Noriega biography, said that, “We Panamanians are the kind of people to make a fuss for a couple of days and then move on.” For the most part, Noriega no longer stirs up strong emotions among the people of Panama.

And what are we to do here in the US? Most students in my Latin American Politics course this semester were born after the invasion of Panama. Most admitted that this was the first time that they had ever heard of the invasion and Manuel Noriega. I would venture to guess that they are not alone. Few Americans know very much about our country’s relationship with Noriega pre-invasion, the 1989 invasion itself, or his 20 years in a Miami prison.

After a flurry of news articles this week in the US, we are unlikely to hear anything else of the man and the country he once ruled until he passes from this earth. Like the people of Panama, the US can move on.

Mike Allison is an associate professor in the political science department and a member of the Latin American and Women’s Studies Department at the University of Scranton in Pennsylvania.  He blogs on Central American Politics here. 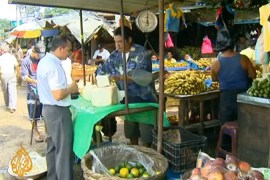 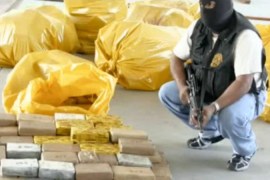 More murders take place in the Central American country than anywhere else, but will putting troops on the streets help? 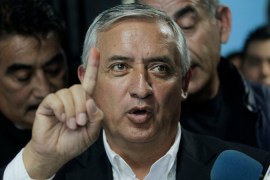