Melbourne, Australia – This is the second in a three-part essay that explores an often neglected aspects of corporate responsibility: the paradox of a “responsible” arms maker. The author argues that the impact on society – inherent in the deployment and threat of weapon use – makes a standard of corporate responsibility difficult to apply. Instead, the author argues, those interested in corporate behaviour must view such firms through a “corporate social irresponsibility” lens, a strategy that identifies and allows a response to be made to normative developments, through proactive engagement and divestment strategies.

In this chapter, the author examines the current limits of arms makers’ responsibilities before engaging with the problem of institutional investment in cluster munitions producers in Part Three. if you missed it, read Part One for an introduction to the concept of corporate social irresponsibility.

At A$4tn ($4.08tn), Australia has the fourth largest investment market in the world – largely thanks to the nine per cent employee superannuation pension guarantee. Pension funds control about 75 per cent of Australia’s investment capital and will continue to do so as long as the compulsory system remains. Therefore, despite employing a number of external service providers to advise, implement and assess the performance of the fund, pension funds are at the heart of the investment markets; their actions are carefully and deliberately governed by a system of trust law.

In the past, investment approaches that attempt to marry socially responsible principles – whether they have been “morally”, “religiously” or “sustainability”-based – have been thought to contradict pension fund trustees’ fiduciary responsibility to act in the “best interests” of their members.

Trustees in Australian courts have been adamantly opposed to the application of so-called “non-financial” criteria to investment decisions, as trust law requires trustees to exercise their powers for a proper purpose – the purpose for which the power was granted. In a trust whose purpose is to provide financial benefits to its beneficiaries, the sole purpose of its investment power is to augment the value of those financial benefits.

The courts have been particularly intent on recognising the moral plurality of Anglo-Australian society and have strongly advised against the incorporation of moral prejudice into fiduciary decision-making. Collateral benefits are allowed to accrue, but trustees must first and foremost pursue the purpose of the trust.

Australian statutes enshrine this chain of logic. Section 52(2)(c) of Superannuation Industry (Supervision) Act 1993 (SIS) provides that trustees must act in the “best interests” of their members, which in practice means their best financial interests. Section 62 of SIS requires that the “sole purpose” of a superannuation fund is the provision of benefits to its members upon their retirement. Finally, section 52(2)(b) mandates that a trustee exercise “the same degree of care, skill and diligence as an ordinary prudent person would exercise in dealing with the property of another for whom the person felt morally bound to provide”.

However, there is a broader range of factors that affect the quality of the decision process and those that relate to the motives of the trustee.

The first of the five central considerations involved requires that investment power be exercised in the “best interests” of the members. Next, the trustees cannot permit consequential, collateral benefits to prejudice their pursuit of the trust’s purpose. Third, the connection between the purpose and the benefit to the beneficiary must be material and direct. (“Speculative and remote” benefits, such as the impact of a single superannuation fund on the economy, are not sufficient.) Fourth, trustees are required to act impartially when balancing the interests of the various members of their fund. And fifth, the trustee has the obligation to refute any assertion claiming that any decision to pursue a socially responsible approach was motivated by an improper purpose, such as the furtherance of union policy (Cowan v Scargill) or some personal moral or ethical ground (Harries v Church Commissioners).

The decision process may be also affected by three other factors. Section 52(2)(b) of the SIS Act restates that trustees must be able to demonstrate due care and exercised appropriate levels of diligence to reach their decisions. This means that any investment strategy chosen by a trustee must be founded on evidence that has been rigorously analysed and carefully considered. Trustees are also required to explicitly consider to whether their decisions are in the interests of their beneficiaries. And last, the courts are highly unlikely to determine the relative merits of different investment strategies as long as they possess some basic level of plausibility. Procedural elements (independence, impartiality, loyalty, prudence, objectivity, care/skill/diligence etc) must also be satisfied.

These considerations mean that Australian trust law is unlikely to challenge an investor which adopts a “socially responsible” investment approach if the strategy is carefully designed and implemented; not expected by the trustees to prejudice the financial outcomes for members on retirement; and not polluted by outside motivations. Thus, a strategy based on legal and financial theory norms will satisfy an Australian court.

Examinations of the legal constraints on trustees in regards to socially responsible investment approaches are well developed. There are two predominant financial constraints on institutional investors. One, that it is difficult to empirically prove the effects of CSR programmes – evidence suggests that the impact on investment performance is statistically insignificant – and two, the ability to pursue a CSR policy can pinpoint certain things about a company (stability, long term focus, etc) that may actually be the real drivers of corporate performance. In other words, it can be the result, not the cause, of an above average corporate performance.

An alternate strategy is to use the opposite (yet complementary) strategy of corporate social irresponsibility (CSI). CSI is based on constitutive and regulatory norms rather than moral or practical ones. Strategies and practices based on CSI offer institutional investors specific details rather than an open-ended raft of environmental, social and governance concerns – due to the fact that what is considered illegal is also likely socially irresponsible. Put another way: vice is finite and easier to quantify than virtue.

According to research, the threshold of the law is likely to significantly impact the concentration of business activity – especially in industries where there is comparatively little “reward for virtue”. A number of meta-analyses into socially responsible and ethical investment approaches and traditional CSR strategies generates statistically insignificant results. And yet a similar study of illegal and socially irresponsible corporate behaviour found a significant economic performance penalty.

Traditionally, CSR programmes and frameworks have focused on aspirational and moral virtues of human rights and society. For instance, the 1999 UN Global Compact references a range of international conventions regarding environmental, social and governance issues such as the United Nations Declaration of Human Rights as a set of aspirational goals rather than a defined set of laws.

Similarly, both the Interfaith Centre for Corporate Responsibility (ICCR) formed in 1971 and the 1993 Interfaith Declaration on Business Ethics attempted to codify “the shared moral, ethical and spiritual values” that must be imbued within businesses according to the three Abrahamic traditions: Judaism, Christianity and Islam. But these initiatives have yet to lead to lasting or meaningful change in business behaviour.

Since the war in Iraq beginning in 2003, there have been additional efforts to address the role of business in society, especially in relation to human rights. Taking a legal point of view, the Business and Human Rights Resource Centre was formed as a collaborative partnership between Amnesty International and various academic institutions around the world.

It has now come to house the work of the United Nations Special Representative of the Secretary-General on Business and Human Rights, Professor John Ruggie, who was appointed in 2005 following the failure of the 2003 Norms on the responsibilities of transnational corporations and other business enterprises with regard to human rights. This development was a result of a normative “privatisation” of corporate responsibilities under international law.

However, the discussions that took place preceeding the failed norms were significant: It was the first time that states – the primary enforcers of human rights – officially recognised that businesses must also play their part.

Issues of state sovereignty and responsibility are the very basis of public international law, which is primarily concerned with their rights and duties rather than those of market actors in their jurisdiction. Although public and private international laws exist, their applicability to market actors like corporations and investment capital providers is still highly contested.

The responsibility falls with the state for the behaviour of all actors within its jurisdiction. But the application of that responsibility varies widely in different nations depending on the issue, as does the duty to ensure compliance in instances of extraterritoriality. One of the central quandaries of international law with regards to non-state actors is that the world’s 194 nation states and more than 80,000 multinational corporations have commercial relationships with millions of affiliates and suppliers all over the world.

However, the “solution” presented by CSI is incomplete: it relies on the formation of domestic legislation (which, by nature, varies between states) and the acceptance of international laws and principles. This unveils another gap: At present, there is no international law that places obligations on market actors directly, which would require the formation of a treaty.

UN Secretary-General Special Representative on Business and Human Rights John Ruggie argues that there are several factors that prevent such a development from materialising.

First, there exists a raft of cultural and religious differences between states that impede the establishment of a truly universal set of human rights. And it is unlikely that market actors such as corporations and investors would launch such an initiative. Moreover, in order to reach an agreement, the standards of such a treaty are likely to be lower than the standards set in the myriad existing treaties concerning humanitarian or human rights standards. Third, enforcement would likely be left to nation states and result in variable standards between them. Fourth, such significant treaties are complex matters to resolve, and the diversified and global structure of modern economic actors further exacerbates the prospect of formulating a binding instrument.

“… the root cause of the business and human rights predicament today lies in the governance gaps created by globalisation – between the scope and impact of economic forces and actors, and the capacity of societies to manage their adverse consequences”.

Read Part Three of this series: What’s the harm of cluster munitions?

NAJ Taylor is a doctoral candidate in the School of Political Science and International Studies at the University of Queensland, and author of This Blog Harms. 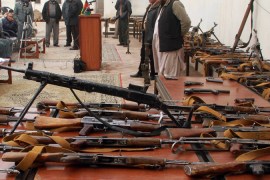 The paradox of a ‘responsible’ arms maker

The negative impact of arms manufacture calls for a closer look at corporate social responsibility. 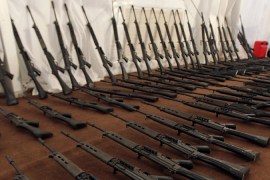 According to Amnesty International, the US, Russia and European countries supplied arms used against Arab protesters.