Mahmoud Abbas is traveling to Colombia to persuade the president to support Palestine in the United Nations Security Council (UNSC). His trip, however, will be a waste of time because Bogota’s vote is decided in the United States, and to a significant extent, in Israel.

Last week, Palestinian President Mahmoud Abbas announced that his country’s efforts to obtain full United Nations membership had secured eight votes in the UNSC. This is one vote shy of the nine necessary to trigger the announced veto from the US, but one that would grant a massive symbolic and moral victory to the struggles of the Palestinian people. Abbas also revealed he will visit Colombia as part of a tour to three non-permanent UNSC members that have yet to pledge their support to the Palestinian cause. The Colombian president, Juan Manuel Santos, confirmed over the weekend that he will be personally meeting Abbas on October 11 in Bogota.

Abbas’ delegation expects Bogota’s vote to be the easiest to sway. They reason that, since Colombia is the only South American country not to have diplomatically recognised the Palestinian state, national, regional and international pressure can be more effective. For starters, the Colombian government’s preferred position to abstain from voting is widely unpopular at home where polls, op-ed columnists, and academics largely denounce Bogota’s intransigent position. In addition, Santos’ position is diametrically opposed to the concrete actions in favour of human rights in the country.

Regionally, Colombia occupies the UNSC seat in representation of Latin America and the Caribbean, hence there is certain expectation that the vote reflects the region’s views, rather than only Bogota’s position. In addition, Colombia holds the chair of UNASUR, a regional body that the current Colombian government, contrary to the previous president, is very enthusiastic about. These aspects together with the condemnation by Santos of Israel’s decision last week to build new settlement units in east Jerusalem certainly contributes to Abbas’ optimism.

Nevertheless, while Abbas is correct in thinking that international pressure may affect Colombia’s position, it is pressure from the US and, to a significant extent, from Israel that is effective.

Washington’s leverage over Colombia is largely the result of the $6.8bn in financial and military support to fight drug trafficking and leftist guerrillas. Even though the flow of drugs to the US has not been significantly stemmed, Washington continues the funding only because doing otherwise would be admitting the obvious failure of the forty-year-old “War on Drugs” policy. That is not to say, however, that the Colombian government and the military do not heavily rely on that aid to continue the military campaign against the leftist guerrilla groups.

Another area of leverage lies on Colombia’s economic dependance on the US. South American countries have disregarded Washington’s pressure to support Israel thanks to the independence that China, as the top export market for many, has brought. In contrast, 37.5 per cent of Colombia’s total exports in 2011 to date have reached the US, while the second export markets were the Netherlands and China – with only 4.6 per cent each of total exports. Even so, Colombia continues on its three-year wait for the ratification of a Free Trade Agreement by the US. Since this FTA may reach Congress as early as this week, as part of Washington’s new plan to restart its ailing economy, Bogota may be especially careful in maintaining a subservient diplomatic position.

Yet, Israel’s leverage over Colombia has also been responsible for Santos’ position, albeit less noticed internationally. Such a strategy may explain more convincingly Santos’ meeting with Israel’s Prime Minister Binyamin Netanyahu before his speech at last week’s UN plenary section, rather than Santos holding discussions with Barack Obama.

In Colombia there is nothing resembling the powerful Israel lobby in the US, especially when the Jewish community only numbers around 4,000 people. Rather, Israel’s strategy consisted in establishing close personal relationships with Colombian high level officials to sell state-of-the-art military equipment, including technical expertise. Since 2006, when Santos became defence minister, this relationship reached new heights. This is especially notable after two decades of relatively cool relations between Israel and Colombia – due to Israeli mercenaries having trained right-wing paramilitary death squads.

In 1994, Colombia bought the rights to manufacture the Israeli Galil assault rifles and then became the only manufacturer in the world. In 2006, it emerged that Colombia was exporting the rifles to Israel. Since mid-2010 Colombia also manufactures the new generation of rifles. In 2007, an Israeli firm, Global Comprehensive Security Transformation (Global CST), owned by a former Brigadier General Yisrael Ziv, was awarded a $10 million contract to provide security consultancy and equipment to Colombia’s Special Forces; the firm was reportedly instrumental in the 2008 rescue of 15 hostages held by the FARC.

In late 2007, Santos signed with Israel’s state-owned company Israel Aircraft Industries (IAI) a $160 million contract to acquire 13 Kfir C10-C12 combat airplanes and upgrade 11 jets, purchased in the 1980s, to the C10 specification. A $60 million contract was also signed to convert a Boeing 767 into a mid-air refuelling aircraft. The Colombian government, therefore, needs to rely on Israeli expertise and spare parts to maintain the jets in appropriate working condition, as well as to lead investigations when such planes crash, as has happened in two occasions since 2009 when the first batch of fighter jets were delivered.

In early 2008, during a visit to Israel, on the invitation of Ehud Barak, Santos went on to declare: “The cooperation between Colombia and Israel is at its best moment and this is, as strategic news, very important for the country [Colombia].” Israel has been specially active in nurturing this relationship. Israel was one of the first countries to send aid to the victims of catastrophic floods that occurred in Colombia in late 2010. During the second week of December that year, Israel, through its defence ministry, sent 50 tons of humanitarian aid to Colombia. An amount that Yisrael Ziv, after visiting affected areas, reported in the Israeli media was the biggest by any country up to that point and “reflect[ed] the very close relations that have developed between the two countries in recent years”.

The closeness of this relationship was such that it provoked serious reservations at the US embassy in Bogota. A November 2008 diplomatic cable, released by Wikileaks, confirmed the embassy’s concerns with Global CST and IAI. The cable, classified as secret, indicates that Yisrael Ziv was Santos’ “personal acquaintance” and, more telling, that 38 per cent of Colombia’s defence budget, roughly 300m dollars, went to Israel in 2007. The cable also reports that, in late 2009, Santos’ successor as defence minister, Gabriel Silva Lujan, overruled the armed forces commander over a decision to purchase Israeli remotely controlled aerial vehicles, citing dissatisfaction with Global CST’s less-than-stellar services.

Some may even argue that Santos’ support for Israel is in exchange for the extradition of Yair Klein, a former lieutenant colonel in the Israeli army who became a famous mercenary. In 2002, Klein was convicted in absentia by a Colombian court for training paramilitary death squads in the late 1980s. He is currently free in Israel after Russia refused to extradite him to Colombia, citing human rights concerns in November 2010. Nevertheless, it is unlikely that Israel or even Santos would want Klein extradited given his intimate knowledge of Israel’s ties with mercenary groups and the responsibility of Colombia’s army and politicians in the formation of right-wing death squads. Thus, Santos’ meeting with Abbas may be a mere cosmetic attempt to display a conciliatory image as well as to disguise his lack of autonomy in the decision over whether to endorse the statehood bid.

The United States leverage over Colombia may partly explain Bogota’s position over the Palestinian effort to obtain full UN membership, but Israel’s leverage over Bogota – and especially over Juan Manuel Santos – may offer a more complete explanation of his staunch support for Israel. Mahmoud Abbas’ visit to Colombia will therefore be a waste of time.

Sebastian Castaneda is a graduate student at the University of Hong Kong and a regular op-ed columnist for Colombia Reports. 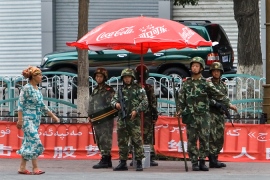