If that’s true, then Hawaii is well poised to serve as the place where the proverbial baton is handed off. This November (8-13), Honolulu will host the APEC (Asia-Pacific Economic Cooperation) 2011 summit where 21 member economies will discuss region issues.

Founded in 1989 as a forum for “facilitating economic growth, cooperation, trade and investment in the Asia-Pacific region”, APEC comprises some of the world’s largest economies including the US, China, Japan, Russia, South Korea, Canada, Singapore, Hong Kong, Chinese Taipei (Taiwan) and Australia – as well as developing economies from Vietnam and the Philippines to Mexico and Peru.

APEC’s primary focus is on what it calls the “Three Pillars of APEC”: Trade and investment liberalisation, business facilitation and economic and technical cooperation.

As a single economic body representing 40 per cent of the world’s population, 54 per cent of global GDP (about $34 trillion in 2008) and approximately 44 per cent of world trade, APEC is enormous, so it’s no wonder Hawaii’s state government and local business leaders thrill at hosting such a big fish.

Moana Nui (the name means “Great Ocean” in Hawaiian) will convene in Honolulu (Nov 9-11) to discuss issues vital to the well-being of Asian-Pacific peoples with an emphasis on protecting indigenous rights, local economies and fragile ecosystems that are often disproportionately impacted by resource exploitation, militarisation and free trade policies such as the Trans-Pacific Partnership (TPP) agreement, currently under negotiation among nine APEC members.

Moana Nui is being organised by academics, activists and advocates around a wide range of social, economic and environmental issues. More than three dozen participants from the region will host panel discussions that challenge the APEC model and offer alternate approaches to problems facing this vital region.

And while both APEC and Moana Nui claim to seek the prosperity and well-being of the Asia-Pacific region, their scale, financial resources and philosophies are very different.

Moana Nui coordinator Arnie Saiki says the two are incompatible. “If we advocate environmental justice and indigenous stewardship over land resources, this is absolutely anathema to the free market which APEC is founded upon.”

Saiki points out that despite the “Pacific” in APEC’s name, the smaller politically independent body of Pacific Island nations are absent from APEC – except through representation as the Pacific Island Forum which observes APEC talks, but has no vote.

Moana Nui, he says, will challenge globalisation, militarisation, resource exploitation, environmental degradation and what he calls “the strategic and economic hegemony of our region”.

Is the APEC model flawed?

Richard Heinberg, a senior fellow at the Post Carbon Institute and author of ten books on peak oil and related issues, will attend Moana Nui. Heinberg says the globalisation of trade is highly vulnerable for two reasons: The depletion of fossil fuels and associated rising costs and the global credit crisis.

“Partly as a result of the gradual failure of our system of cheap energy and transport, we are seeing the unravelling of the global credit system,” says Heinberg.

“We need to develop more local resilience, more self-sufficiency and more ability to provision ourselves within our local ecosystems.”

APEC, Heinberg suggests, supports a system of international trade that is dependent upon cheap fossil fuels, satellite communications, container ships and a few key technologies that are highly vulnerable.

Also participating in the Moana Nui conference is the International Forum on Globalisation. Executive director Victor Menotti says APEC and Moana Nui represent “entirely different world views”. APEC, he says, is the “industrial corporate, global free trade view based on increased consumption and materialism”, while Moana Nui represents a “community, local-level perspective that values subsistence and indigenous economies”. He calls it a “clash of paradigms”.

Menotti says APEC could potentially do good by exchanging ideas on best practices, planning for climate change adaptation and inter-governmental cooperation, but says APEC is primarily a corporate agenda that prioritises trade liberalisation, getting government out of the way for “corporate rape and pillage”.

“It’s a question of priorities. APEC is primarily a business forum and its economic collaboration with a particular role for government and trade and investment liberalisation.”

Moana Nui will also address environmental concerns with the participation of groups such as Pacific Environment, a San Francisco-based NGO that focuses on California, Alaska, Russia and China, collaborating with grassroots environmental groups, offering support, guidance and advocacy.

Galina Angarova, Pacific Environment’s Russia program director, will speak on a panel that examines the impact of industrial resource extraction (oil, gas, timber, mineral and animal). She says Moana Nui is a forum to consider comprehensive solutions for the region.

“I think the reason we are having a parallel meeting is to draw APEC’s attention to the problems we have in the region. I am really hopeful that APEC itself will emphasise environmentally friendly ways to grow economically without impacting climate change, natural resources and carbon footprints. Hopefully it is going to be positive. I believe people are there to listen to each other – but I might be wrong.”

Professor Peter Petri, a senior fellow at the East-West Center in Honolulu and economics professor at Brandeis University specialises in Asia-Pacific economics, has consulted for APEC and was the chair of the APEC Studies Centre. He expects “some engagement” of outside groups, but says: “My guess is that [APEC] will make some effort to listen and it will be very difficult to integrate things that are very far away from the concrete agenda APEC is trying to pursue.”

“APEC will be dealing at levels of detail and issues that are very different from the ones that people might be interested in pursuing.”

“[APEC] really is an effort to build a community among people from different countries in lots of different areas. It may be not a bad place for NGO concerns to be raised although how much immediate response they will get, that’s hard to tell.”

He describes APEC as having the capacity to build “international communities” at many levels beyond economics and trade policies. “I don’t think that’s necessarily mutually exclusive with also trying to build stronger communities with national and local levels,” he adds.

But looking at these two very different international gatherings, it’s easy to see APEC as globalisation’s Goliath towering over the global south’s David-like figure of Moana Nui. As the world’s media focuses on the telegenic image of Barack Obama standing alongside Hu Jintao, Dmitry Medvedev and other heads of state in colorful aloha shirts with a tropical backdrop, it’s possible that Moana Nui will simply be ignored by APEC and the press.

“I think there is a real danger of Moana Nui being overshadowed,” says Moana Nui participant Kyle Kajihiro, acting coordinator for Hawaii Peace and Justice. Kajihiro, along with activists representing Guam, Okinawa and Jeju island, South Korea, will be conducting a workshop on the impacts of militarisation.

Kajihiro says Hawaii is an apt location to discuss these issues because “Hawaii was one of the early casualties of global capitalism … and it experienced a loss of sovereignty in exchange for trade with America”.
“David and Goliath is a suitable metaphor for Hawaii or any Pacific nation where APEC powers are converging. They pick small places because they think we are easy to control and they use us to dominate others. The small islands are really strategic in building power and control around the planet.”

Kajihiro and others say Hawaii is attractive to APEC because its remote location reduces the potential for outside protesters and, with its huge military presence, is easy to secure.

“It’s a weird confluence of militarisation and tourism,” Kajihiro says. “On one hand APEC is promoting the myth of Hawaii as a welcoming, compliant venue to hold meetings, but it is all buttressed by an infrastructure of state violence that exists here.”

Local Hawaii media and groups such as Kajihiro’s have reported on and questioned the millions of dollars being spent on APEC security that could install or convert as many as 260 surveillance cameras and an arsenal of tens of thousands of dollars worth of crowd control equipment – from pepper spray and Taser guns to long-range loud speakers and other “non-lethal” devices.

Hawaii’s Lieutenant Governor Brian Schatz is the lead state official for APEC. He says: “We are a free speech nation which means we’re not going to diminish anybody’s ability to express an opinion that may be contrary to the mainstream about APEC. I think that attitude will serve the event well and keep whatever dissenting voices there may be from feeling alienated to the point of violence.”

“We feel confident that we have the appropriate security measures in place and that the conference will be safe and successful.”

Kajihiro, however, suggests the funds could be better spent: “We could use some of that (security) money to bring more people affected by the APEC agenda to have a more inclusive dialogue.”

Jon Letman is an independent journalist in Hawaii where he covers wildlife conservation, politics and people of the Asia-Pacific region. Follow him on Twitter. 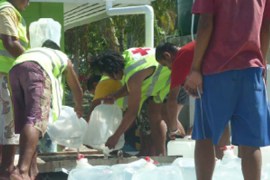 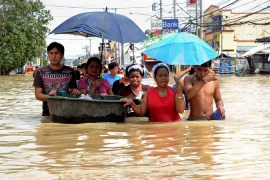 The Philippines picks up the peices as the storm churns away 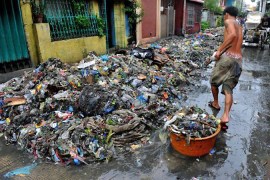