Statement of fact 1: The United Arab Emirates has towered over most Arab states. Its high rises, theme parks, emporium and wealth are an envy, a magnate and a hub, creating a unique model of development built thus far on the basis of patrimonial but providential capitalism, not distributive political pluralism.

Statement of fact 2: The UAE is now seeking to take this developmental model to new heights through which this rich state is seeking to rise to the challenge of democratic citizenship.

Its own band of “election fetishism” calls for initial assessment to find out the extent it measures up to the Arab democratic occasion.

There is no single paradigm of how Arab states are seeking to respond to the global and local pressures for reforming polity. The word “demos” is rarely thought of in conjunction with the UAE. The associations vary. Theme parks come to mind. So do patriarchal capitalism. Hong Kong, Lee Kwon Yew, skyscrapers, the late  Sheikh Zayed, the contrasts and even the flagrant ghettoisation.

When Hong Kong was handed over to China, the UAE fitted the bill of global capitalism. It emerged as the new Mecca of business, where opportunity for off-shore money-making for millions of Westerners could still be fulfilled, especially as South Africa apartheid-based mercantilism limited the geography where Euro-American capitalism can scramble for profit and where the “missionary” or “civilising” white man’s burden is carried out. If there is a branding for the UAE it is its adeptness at making money for itself and for others.

For obvious reasons the super Singaporean statesman comes to mind – even though today’s Singapore has been consolidating political competition and participation. Like Singapore, skyscrapers have changed the Arabian skyline and Dubai dazzles in many a way, including the commendable steps taken to green rampant urbanism (almasdar project), reversing earlier neglect of the country’s fragile eco-system.

The late Sheikh Zayed was another tower of strength, uniting his people and providing a huge moral and financial fillip to regional constructive development and engagement.

But there is an “abyss”. The grades of citizenship found in the UAE point to the class-based brand of citizenship. Westerners occupy the apex of professional hierarchy, earning more money for the same job done by equally qualified non-Western doctors, engineers or teachers. These grades of appreciation and rewards exist side by side with “ghettoes” of expatriate cultures, ethnicities, colours, and human demography.
All would add new dimensions to Marx’s critique of capitalism, and would give Frantz Fanon a field day rethinking his wretched of the earth. The medieval Arab philosopher of history, Ibn Khaldun too: Were he to come back to life he would re-study clan politics to consider the mutation of socio-political kinship when tribe and massive wealth join forces.

The Emirate … not ‘Athena’

I had occasion to comment on the reinvention of politics in the UAE in my 2009 book about Arab “elections without democracy”. The United Arab Emirates held its first elections ever in 2006. Precisely 6,689 citizens, less than 1 per cent of the total population, were the only voters in polls held over three days in December 2006.

That is, 1,689 more than the idealised number of the ideal Greek polity whose 5,000 select male citizens could fit in a stadium in order to practice democracy directly via deliberation.

The UAE’s select citizenry in those elections conjured up the Greek polis except in democracy. Numerically, it was the privileged that the right to vote was bestowed upon.

The wealth-makers of the UAE, mostly Asians working under the most backward labour laws anywhere, still remain at once the foreigners and the “slaves” with no citizenship rights of any kind.

There was, however, a concession to women in the UAE that was not available to females in the Greek polis. Women made up 18 per cent of the electoral College. Of the 6,689 voters 1,203 were women.

This was one of the most partial electorates ever invented in the Arab Gulf and possibly the entire world since the Greeks.

Moreover, the 6,689 citizens who voted in 2006, selected by the rulers of the seven Emirates, elected only half of the Federal National Council (FNC), an advisory body with no legislative powers.

The FNC elections of September 2011 build on the 2006 elections and improve on them, markedly widening the electorate to nearly 130,000. That is, a twenty-fold expansion.

But here lies the dysfunction of “election fetishism”: the low-voter turnout. The figures speak for themselves.

The 20 deputies voted into the FNC (Abu Dhabi and Dubai each has 4 councillors; Sharjah and Ras Al-Khaimah 3 each; and 2 councillors allocated to each of the smaller three Emirates: Ajman, Fujairah and Umm Al-Quwain) cannot take comfort in the low number of votes they have received.

The votes given to the 6 councillors from the three small Emirates total 2,283. The average voter turnout here is in the thirties. Only Sharjah registered a voter turnout higher than 40 per cent, the highest in the UAE.

Apathy or perhaps, depending on one’s interpretation, level of comfort and satisfaction may explain the lowest voter turnout in the richest Emirates and largest electorates: Abu Dhabi and Dubai. The former recorded 21.3 per cent and the latter 24.7 per cent.

The question will have to be asked why only 20,000 well-provided for individuals from a voting population of about 130,000 made it to the polls. It cannot be the absence of transportation, long distance or rain. May be the answers lie in citizenship education or self-worth as citizens.

Only one woman, Sheikha Issa Ghanam, was voted to the FNC in the smallest Emirate, Umm Al-Quwain. Tribal solidarity may also explain why Al-Amiri clan won three of the four seats allocated to Abu Dhabi. The two seats “contested” in Ajman went to the Al-Shamsi clan.

In less than twenty years it has engineered a spectacular model of urban and mercantile development unique in the Arab region.

The rest of us Arabs can look in amazement with a tinge of envy at the massive wealth of this important Arab Gulf.

There are no lessons to be given to the Emiratis who alone know their specificity and what works and does not work in their country. They are entitled to make mistakes they can with each election correct and draw lessons from on their path to upgrading citizenship, reinventing their Emirates into electorates.

Only in so doing, they will not be building democracy on sinking sand. 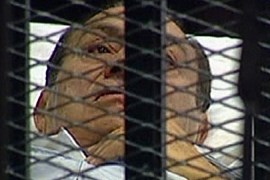 Caging Mubarak: ‘The Pharaoh has no clothes’

The trial of the former president of Egypt shows how the “rule of the mighty” is being replaced by the rule of law. 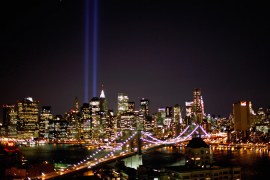 Ten years later, 9/11 continues to condition our thinking, being, behaviour, and identity.