What is occurring on Wall Street right now is truly remarkable. For more than two weeks, in the sanctum of the great cathedral of global capitalism, the dispossessed have liberated territory from the financial overlords and their police army.

They have created a unique opportunity to shift the tides of history in the tradition of other great peaceful occupations from the sit-down strikes of the 1930s to the lunch-counter sit-ins of the 1960s to the democratic uprisings across the Arab world and Europe today.

While the Wall Street occupation is growing, it needs an all-out commitment from everyone who cheered the Egyptians in Tahrir Square, said “We are all Wisconsin”, and stood in solidarity with the Greeks and Spaniards. This is a movement for anyone who lacks a job, housing or healthcare, or thinks they have no future.

At some point the number of people occupying Wall Street – whether that’s five thousand, ten thousand or fifty thousand – will force the powers that be to offer concessions. No one can say how many people it will take or even how things will change exactly, but there is a real potential for bypassing a corrupt political process and to begin realising a society based on human needs not hedge fund profits.

After all, who would have imagined a year ago that Tunisians and Egyptians would oust their dictators?

At Liberty Park, the nerve centre of the occupation, more than a thousand people gather every day to debate, discuss and organise what to do about our failed system that has allowed the 400 richest Americans at the top to amass more wealth than the 180 million Americans at the bottom.

It’s astonishing that this self-organised festival of democracy has sprouted on the turf of the masters of the universe, the men who play the tune that both political parties and the media dance to. The New York Police Department, which has deployed hundreds of officers at a time to surround and intimidate protesters, is capable of arresting everyone and clearing Liberty Plaza in minutes. But they haven’t, which is also astonishing.

That’s because assaulting peaceful crowds in a public square demanding real democracy – economic and not just political – would remind the world of the brittle autocrats who brutalised their people demanding justice before they were swept away by the Arab Spring. And the state violence has already backfired. After police attacked a Saturday afternoon march that started from Liberty Park the crowds only got bigger and media interest grew.

The Wall Street occupation has already succeeded in revealing the bankruptcy of the dominant powers – the economic, the political, media and security forces. They have nothing positive to offer humanity, not that they ever did for the Global South, but now their quest for endless profits means deepening the misery with a thousand austerity cuts.

Even their solutions are cruel jokes. They tell us that the “Buffett Rule” would spread the pain by asking the penthouse set to sacrifice a tin of caviar, which is what the proposed tax increase would amount to. Meanwhile, the rest of us will have to sacrifice healthcare, food, education, housing, jobs and perhaps our lives to sate the ferocious appetite of capital.

That’s why more and more people are joining the Wall Street occupation. They can tell you about their homes being foreclosed upon, months of grinding unemployment or minimum-wage dead-end jobs, staggering student debt loads, or trying to live without decent healthcare. It’s a whole generation of Americans with no prospects, but who are told to believe in a system that can only offer them Dancing With The Stars and pepper spray to the face.

Yet against every description of a generation derided as narcissistic, apathetic and hopeless they are staking a claim to a better future for all of us.

That’s why we all need to join in. Not just by liking it on Facebook, signing a petition at change.org or retweeting protest photos, but by going down to the occupation itself.

There is great potential here. Sure, it’s a far cry from Tahrir Square or even Wisconsin. But there is the nucleus of a revolt that could shake America’s power structure as much as the Arab world has been upended.

Instead of one to two thousand people a day joining in the occupation there needs to be tens of thousands of people protesting the fat cats driving Bentleys and drinking thousand-dollar bottles of champagne with money they looted from the financial crisis and then from the bailouts while Americans literally die on the streets.

To be fair, the scene in Liberty Plaza seems messy and chaotic. But it’s also a laboratory of possibility, and that’s the beauty of democracy. As opposed to our monoculture world, where political life is flipping a lever every four years, social life is being a consumer and economic life is being a timid cog, the Wall Street occupation is creating a polyculture of ideas, expression and art.

Yet while many people support the occupation, they hesitate to fully join in and are quick to offer criticism. It’s clear that the biggest obstacles to building a powerful movement are not the police or capital – it’s our own cynicism and despair.

Perhaps their views were coloured by the New York Times article deriding protestors for wishing to “pantomime progressivism” and “Gunning for Wall Street with faulty aim”. Many of the criticisms boil down to “a lack of clear messaging.”

But what’s wrong with that? A fully formed movement is not going to spring from the ground. It has to be created. And who can say what exactly needs to be done? We are not talking about ousting a dictator; though some say we want to oust the dictatorship of capital.

But how can we get broad agreement on any of these? If the protesters came into the square with a pre-determined set of demands it would have only limited their potential. They would have either been dismissed as pie in the sky – such as socialised medicine or nationalising banks – or if they went for weak demands such as the Buffett Rule, their efforts would immediately be absorbed by a failed political system, thus undermining the movement.

That’s why the building of the movement has to go hand in hand with common struggle, debate and radical democracy. It’s how we will create genuine solutions that have legitimacy. And that is what is occurring down at Wall Street.

Now, there are endless objections one can make. But if we focus on the possibilities, and shed our despair, our hesitancy and our cynicism, and collectively come to Wall Street with critical thinking, ideas and solidarity, we can change the world.

How many times in your life do you get a chance to watch history unfold, to actively participate in building a better society, to come together with thousands of people where genuine democracy is the reality and not a fantasy?

For too long our minds have been chained by fear, by division, by impotence. The one thing the elite fear most is a great awakening. That day is here. Together we can seize it.

Arun Gupta is the editor of The Indypendent.

A version of this article was previously published on NaomiKlein.org. 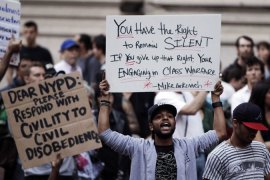 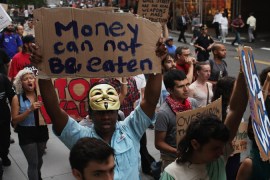 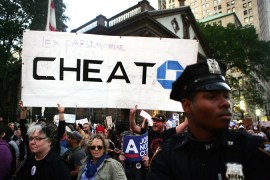 Opinion: What happened to Occupy?