“Many people don’t know that Martin Luther King was obsessed about how small he was – only five-foot-seven,” revealed Andrew Young, King’s aide during his protest years and a former UN Ambassador. “And he was self-conscious around taller people.”

“But now,” he added, “at the dedication of a monument in his honour on the Mall in Washington, “he is taller than them all on a 30-foot high sculpture alongside America’s founding fathers, and many generals.”

The ceremony, originally slated for August 28, the 48th anniversary of the legendary March on Washington of 1963, was postponed until this past weekend after a double whammy: an earthquake followed by a hurricane.

Tens of thousands of onlookers, many up at 5 AM to get a good seat and mostly from Washington’s black community, enthusiastically responded to a spirited exercise in black history and worshipful idolatry with appearances by civil rights leaders and entertainers, including Aretha Franklin who belted out “Precious Lord”, a gospel classic that King loved.

The speechifying was electric, as you would expect at an event honouring one of the United States’ top orators.

Obama at his best

President Obama gave what may be remembered as the best speech of his career, noting that King had, in a sense, returned to the Mall after nearly a half century.

He was back to stay in a sense in the shadow of Lincoln Memorial where his famous “I have A Dream” speech thrilled civil rights marchers then and is widely admired today, even if most of the public doesn’t remember that that March was for jobs and freedom and King spoke tenth on a programme featuring other remarkable leaders.

Most don’t know either that King tried the same speech out two months earlier at a rally in Detroit.

To his credit, Obama did not dwell just on King’s contribution, but broadened the focus to pay tribute to the movement King led. It was the committed activists who went to jail and some to their graves, he said, that we must remember, noting that real change must come from the pressure of the people.

This insight may reflect a lesson he’s learned while trying and often failing to prevail in an inside the beltway game of bi-partisan compromise, where he relied on support from politicians whose support required wheeling and dealing and giveaways.

He is aware that his efforts to pacify interest groups has eroded his image as a change maker, although in this hometown mostly black crowd, he could do no wrong as many chanted “Four More Years”, a slogan I first heard in the re-elect Nixon campaign of 1972.

The march followed a day of global protest inspired by The Occupy Wall Street movement that is, in this generation, fighting for the kind of economic justice that King embraced in his time.

And, in fact, another well-known acolyte, Reverend Jesse Jackson, told the vast crowd that King had wanted to stage an occupation of his own on this very same Mall as part of a Poor People’s Campaign he was planning at the time of his death.

The Occupy DC group is camped out less than two miles away on Freedom Plaza but had no physical presence at the King event, although their presence and example were cited repeatedly.

It was as if the direct action which the black civil rights movement pioneered has now been adapted by others, mostly white, but, not only, yet no less committed to non-violence and democracy.

It may be a youth thing. There was no social media back in the glory days of civil rights activism. No Internet and a far simpler and clearer black and white divide. Fighting Wall Street is more complex than taking on a racist Southern sheriff, although some of “the liberal” North’s police forces have proven as crude and brutal and with the same result. The more the cops acted out, the more sympathy the movements receive.

Dr King’s kids – Martin III and Bernice, a far more fundamentalist preacher than her father – were among the most militant of the speakers urging the crowds to align themselves with Dr King’s ideas and beliefs, not just his iconic celebrity.

Both called for a return to direct action and spoke approvingly of the example of the Occupy movements. Like their dad, their words imploring them to take to the streets soared and the crowd responded as if the father were still on stage. Bernice called for more radical action while Marty (as he’s called) stressed the importance of activists treating each other respectfully and with love. Dr King used to liken his Movement to a “beloved community”.

There were frequent references to the world and the need to end the US militarism. Dr King’s gutsy and outspoken opposition to the Vietnam War is not mentioned in the National Parks Service brochure about the Memorial, even though President Obama cited it. If Dr King were alive he no doubt would have opposed Obama’s wars too!

Most of the speakers were sympathetic to the nation’s first black president. Reverend Al Sharpton, who many see as bidding to become the next King, warned Republicans not to cut Social Security. “That’s not about Obama,” he said. “That’s about your mama.”

A Jewish religious leader, Israel Dresner, known as “the most arrested Rabbi” in the movement, said he was proud of the disproportionately high Jewish participation in the civil rights movement. He said that while 57 per cent of whites backed John McCain in 2008, 78 per cent of Jews supported Obama.

It was noted that Dr King, in life, was very controversial and even hated by some in the public including in the black community.

“Some felt he was moving too fast, others too slow,” noted Obama. Congressman John Lewis, a civil rights hero in his youth, reminded the audience that King had been stabbed and hit by rocks well before he was shot down.

He was often denounced in the media for being a troublemaker and unrealistic, similar to the way the Occupy activists are regarded.

At the same time, there are critics of all the hoopla about the monument because of the big corporations who donated to it. One of the speakers noted that those companies never supported the Movement when it needed support.

Jared Ball, a black professor at Morgan State University in Baltimore, charges that the corporate “MLK Memorial is designed to ensure that King be forever separated from his from his anti-capitalist, anti-imperialist” work.

Not all corporations were treated lovingly. Former CBS news anchor Dan Rather, who covered King, blasted the corporatisation and bias of TV news organisations since the days of their civil rights coverage.

After the ceremony on the Mall, there was a luncheon at the Freedom Forum, a media organisation, for those, like myself, who “marched with Martin”. (I was on one organising team for the March on Washington in my student activist days.)

Andy Young noted that Dr King’s message and outlook was always international, influenced by Gandhi’s ideas about non-violence and civil disobedience. He supported Mandela in South Africa too. He said it was not surprising that Lei Yixin, the distinguished sculptor who created the monument called “a stone of hope”, after a line in one of Dr King’s speeches, is from China.

Young also lit into irresponsibility on Wall Street and was sympathetic to the Occupy activists, although like many older folks, he urged them to settle on a clearer message and a more disciplined non-violent approach. The idea of a “leaderless” movement upsets him.

But then, he paused, as if contradicted by a personal memory, recalling that many of the same criticisms hurled at them today were directed at student civil rights activists who at the beginning of their struggle were called hot-heads and labeled irresponsible by some leaders in the black community.

History may not repeat itself, but can reveal similarities of spirit and political learning curves.

Danny Schechter writes the Newsdissector.com blog. He directed the film Plunder: The Crime of Our Time about financial crime on Wall Street. 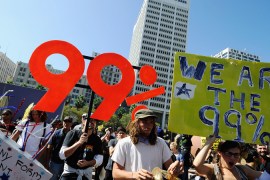 Protests that started at Wall Street have spread, revealing the crisis of representative democracy. 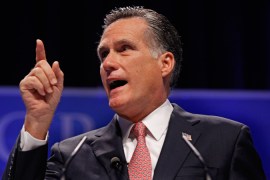 Right-wing idolatry in the US

The American Right has come to obsess over symbols, their politics more concerned about PR than real issues.