Though Wall Street itself was largely empty on Wednesday night, the Broadway entrance to the iconic thoroughfare was packed with thousands of frustrated citizens attempting to march through the very heart of global financial power. Standing in their way were scores of New York City police officers willing to stop their advance with force if necessary.

When elements within the crowd made the decision to press into the police line, that force was executed in the form of indiscriminate blasts of pepper-spray and clubbings. Senior officers swung their batons wildly on a crowded public sidewalk, making no visible attempt to distinguish between those who initiated the surge and those who were exercising their legal right to assemble peacefully. Protesters who sat down in order to underscore their nonviolent intentions were manhandled by the authorities. Lower-ranking officers in blue uniforms joined in the melee by directing sweeping clouds of pepper-spray at the demonstrators. Journalists attempting to document the violence became victims of it.

It was an admittedly chaotic scene and members of the sizable crowd did consciously push into a police line; still, witnesses to the incident claim the NYPD failed disastrously in living up to its credo of “courtesy, professionalism and respect”.

A justifiable use of force?

It was the latest in a growing list of dramatic confrontations between supporters of the Occupy Wall Street movement and the NYPD. Less than one week earlier, the department made a historic mass arrest of at least 730 demonstrators who attempted to march across the Brooklyn Bridge. A week before, internet videos depicting the violent tactics employed by NYPD officers in arresting over 80 demonstrators went viral – including two showing Deputy Inspector Anthony Bologna pepper-spraying corralled citizens on a public sidewalk without provocation.

The idea of Wall Street has become as important as the physical area itself, and Wednesday night was a perfect example of the symbolic showdowns that police officers, and by extension the city of New York, have been instigating with their continued attempts to assert control over the demonstration.

Every time an officer is caught on camera hurting or arresting citizens who are peacefully expressing their frustration with elite control of this struggling country, the movement wins a symbolic and even strategic victory.

In the case of Occupy Wall Street’s original New York presence, many of these dramatic encounters between demonstrators and police have resulted in a loss of innocence among people who have otherwise never been exposed firsthand to police brutality. The protesters have been given a taste of what low income communities and communities of colour deal with everyday. A sense of mutual acknowledgement by people who have faced different manifestations of police misconduct – whether on Wall Street or in Brownsville –  fosters a sense of unity.

Many of those who continue to return to Liberty Plaza believe they are part of something unique, and that what they are doing is justified.

They are correct on both accounts.

You don’t have to be an expert economist, an activist or an academic to understand the movement. The number of Americans living in poverty has climbed to a historic 46.2 million, including one out of six of the nation’s children, while the top one percent is holding onto more than a fifth of the nation’s income. Banks have received massive bailouts, but the ‘hood is still poor. Rural communities are still struggling. Tuition rates continue to rise while students suffocate under the burden of onerous debt. Meanwhile, billions in taxpayer dollars are being funnelled into unconscionable wars on terror and drugs, while profiteers in the defence and criminal punishment industries rake in billions.

These are the kinds of inconsistencies the Occupy Wall Street movement purports to oppose. They are grievances reasonable people would agree are profound.

When it comes down to it, Occupy Wall Street is much bigger than the police versus protester narrative. Significant as those encounters have been and will continue to be, confrontations with the police are only one piece of the puzzle. What we are witnessing in New York City, and across the country, looks less like a protest and more like the birth of a new movement for economic justice. It appears to be a genuine attempt by a justifiably frustrated public to establish a new democratic framework and replace the existing one.

If that is the case, then confrontations with the Praetorian Guard of the status quo and its elite benefactors is hardly a surprise. The police exist in large measure to maintain the existing order. In the eyes of Occupy Wall Street’s supporters, that order has failed too many for too long and must be replaced. Some amount of friction between the two groups in this relationship is all but inevitable.

Luke Richardson quit his job serving steaks across from the New York Stock Exchange to join the movement full-time. The next day the 25-year-old was forcefully arrested and charged with disorderly conduct for standing in the streets with thousands of others. He claims one officer threw punches at him before at least four others pinned him to the ground. They knelt on his head and left him in flex cuffs for four hours. He is now seeing a specialist for nerve damage in his hand.

Upon being released he made his way back to the encampment at Liberty Park and has been involved there since. His commitment bolstered not by the rough police treatment he received, but the connections he made with NYPD officers.

“What strengthened my resolve was actually talking to police officers in the precinct and genuinely feeling that they supported what were doing,” Richardson said. “I think there are large institutional issues with the police – however, I do think there are good people. In general, the police are good people, and they don’t like to see people getting hurt, and they also don’t like to see injustice in general.”

He added: “The police right now stand as a barrier between us and the wealthiest members of society. They are the protectors. As soon as that barrier breaks down, I think true economic justice can be achieved.”

Thus far, the occupiers have handled police encounters with intelligence and poise. Not only have the crackdowns further emboldened and politicised many within Occupy Wall Street’s ranks – voices of the movement have used the attention to spread their message to the world, garnering a growing stream of supporters. The demonstrators have remained peaceful in the face of violence, and have continually reached out to the police, reminding them that the status quo they defend has its eyes on their pensions too, and that their job is to protect people and justice. These conscious efforts have earned the movement credible moral high ground in the minds of many.

But the ongoing occupation in Lower Manhattan is facing real hurdles. The limited space at Liberty Plaza, which is now filled with people – more and more each day – creates serious challenges. Many demonstrators are agitating for expansion. “It’s not about being in Liberty Plaza,” Richardson quipped. “It’s about taking Liberty Plaza out into the world.”

Occupiers who have been there from the beginning are dealing with an influx of new supporters seeking to get involved. While increasing attendance has led to impressive professionalisation in dealing with a number of logistical needs, there are increasing concerns about security issues, organisational efficacy, the decision-making process, and burn-out among veteran participants.

If Occupy Wall Street’s deft handling of the NYPD in recent weeks is any indication of the movement’s capacity to learn, adapt and react, however, there is reason to believe that this demonstration of mass political engagement can overcome its challenges, present and future.

Ryan Devereaux is a freelance journalist who has contributed to The Nation, Salon, Democracy Now and others. 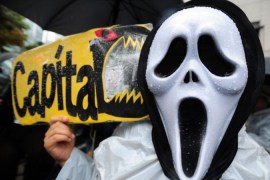 ‘Occupy’ protests held around the world 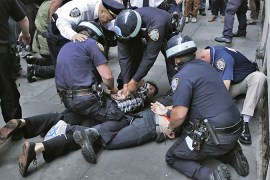 Arrests came as protesters marched in celebration at cancellation of clean-up that threatened to evict them from park. 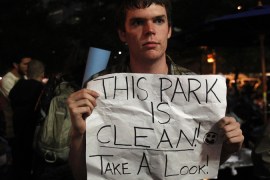