Whether it’s the bronze bull encountered by those occupying Wall Street, the fixation with a Chris Christie presidency not to be, or the ex post facto transformation of Ronald Reagan into Kratos by middle-aged Republican Congresspersons who practically start to giggle and spontaneously pulsate just upon hearing his name, there is one thing you can expect to encounter a lot of on the right side of the political spectrum these days: Golden Calves.

Sure, that Bible thing conservatives claim to have read and revere strictly admonishes those who take to idolatry. But then again, it also doesn’t wish death upon 30-year-olds because they lack health insurance or a poorly conceived bowl-cut by a former Speaker of the House who’s running just about even with the hantavirus in recent Republican presidential polling.

So even the Bible is fallible.

These Golden Calf conservatives have taken impulses that have been long ascendant on the Right, and way-too-present in American culture overall, and transformed their entire belief system into the Cirque de Soleil of idol worship. These days their leaders worship personality, mythology, ideology, theology and an unregulated market economy. These are hailed in much the manner a dog does a bone, or Kelsey Grammar does divorce court.

If you think I exaggerate, think about what has brought them to public ecstasy over the last few months, and the right’s obsessions in general, and tell me core members of the tea-party brigade aren’t addicted to symbol over substance. Think about it … Rick Perry. Paul Ryan’s unworkable budget plan. Chris Christie. Guns. The Constitution (at least their mistaken reading of it). Socialism. Bigger guns. Wall Street. American Exceptionalism. Really, really big guns.

This tendency to idolise people and objects makes it all the more amusing when loudmouth right-wing preachers start in with all the “cult” talk about Mitt Romney’s Mormonism. So let me get this straight, Romney’s version of Christianity is cultish, while those who handle snakes, speak in tongues and ask their arena-based parishioners for their very last dime, so they can erect Mammon-on-Earth, are not?

This is not to say some Democrats have not fallen into this same trap. Again, grasping at symbols, especially charismatic individuals, is encoded in human DNA. There are those who would stick with President Obama were he to break every campaign promise he made during the 2008 election (so far he’s only at about 82 per cent). But overall, education and civic engagement tend to lessen this tendency. Hence, it is not only a much more interesting, but foreboding phenomenon on the right.

The danger this poses to a functioning democracy are clear – it turns policy into public relations. Back in the late 1970s, neo-conservative godfather Irving Kristol admitted as much about supply-side economics. It was just a symbolic ploy to win over voters, or as he put it in Public Interest in 1995, “The task, as I saw it, was to create a new majority, which evidently would mean a conservative majority, which came to mean, in turn, a Republican majority – so political effectiveness was the priority, not the accounting deficiencies of government.”

Today, even with evidence abound that their budgetary math is like Gary Busey’s driving, conservatives still adhere to this “voodoo economics,” as George HW Bush called it before embracing it, pretending tax cuts continually showered on our oligarchic overlords will somehow “trickle down” through the floors of their penthouses to the rest of the population.

The real-world consequences can be seen in President Obama’s not-big enough jobs bill the GOPers in the Senate (and reliable Democratic turncoat Senator Ben Nelson, as well as Sen. Jon Tester) have already rejected. Just when a report released by CG/LA – run by passionate infrastructure-improvement guru and colleague Norman Anderson – reveals a study conducted in nations spanning the globe that explains why US roads and bridges are literally crumbling before our eyes, with the United States ranked last in “leadership” and “vision” in infrastructure project development – the most potent short term job creator and long term economic stimulus.

Good news though, even though we’ve fallen way behind Brazil and India, we still hanging tough with Peru! And I’m just positive we’re totally schooling Botswana.

So what are we waiting for, a good logo for these projects? 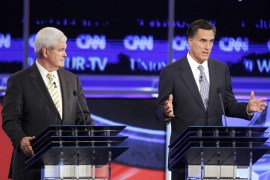 US Republicans face off 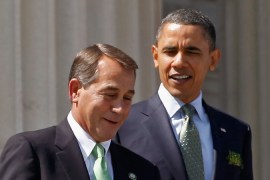 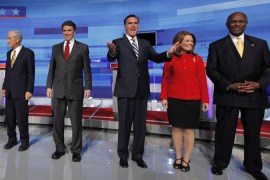 Republicans fight it out in Florida debate

Rick Perry and Mitt Romney clash over education and healthcare ideas in the race to be the party’s presidential nominee.