The park is small, just one tiny block, a sliver of earth reclaimed from the destructive fury of the 9/11 building collapses. It was brought back to life, complete with flowers and pink marble seating areas by a real estate baron who had it rebuilt and named it after a former head of a global real estate company.

The rich love to build monuments such as Zuccotti Park, to people like themselves.

Halal food trucks line its south side while police vans park near a surveillance tower that is closely monitoring the action below on the north.

Occupy Wall Street, as it calls itself, sits in the middle across the street from venerable financial firms on one end, while a new tower rises on the other on a far larger empty field called Ground Zero.

There’s the din of non-stop traffic and construction noise on the outside, while inside activists assemble as they have for nearly a month in a beehive of activity, some of it intensely political, much of it dealing with the more personal issues of survival like finding a sleeping bag as the nights get colder.

Some deal with cleaning or cooking or disseminating information on websites and Twitter while others plan direct action forays into other parts of the city to confront financial power or find new recruits.

The New York Times reports that many of those drawn to this improvised encampment have never been politically active before. Tourist buses now pull up on the Broadway side to gawk, take pictures and sometimes engage in shouted exchanges of opinion, most of it very friendly.

It isn’t always that way. On Wednesday night, after a solidarity march with as many as 30,000 community activists and trade union members arrived to cheers and flag waving, a small group broke away to breech the barricades onto Wall Street, which has been declared a no-go area by police, in much the same way as protests were not allowed in parts of Northern Ireland during the “troubles”.

Constitutional or not, the cops have more power than the First Amendment in some locations, proving the validity of Mao’s dictum that “power grows out of the barrel of a gun”.

The police response was vicious. They pepper sprayed non-violent activists and, in all, arrested 28 and injured scores. Still, this was nowhere as bloody as it had been in the 1960s when the Nixon Administration incited construction workers, known by their hard hats, to attack anti-Vietnam War protesters with pipes and fists.

On Wednesday, many unions in New York were out en mass to back “the kids”, as they called them, for standing up and admitted they were embarrassed into action. Their style was very different, union leaders spoke through loudspeakers shouting slogans like “Wall Street Was Bailed Out, We Were Sold Out.”

Sterling Roberson, vice president of the United Federation of Teachers, explained why workers were there. He said union members shared the ideals of activists who have been camped out in sleeping bags. “The middle class is taking the burden, but the wealthiest of our state and country are not,” was his explanation.

In the park, amplified sound is not permitted and there are no leaders. Wannabe speakers shout “mic check” and when the phrase is repeated, those assembled stop what they are doing and listen in while the whole crowd repeats what is said in bursts so everyone can hear. The occupiers argue they are part of the 99 per cent of Americans who are being victimised by an elite 1 per cent.

The media coverage went from ignoring the protest to ridiculing it to admiring it, that’s with the exception of far right Fox News that has never seen a progressive protest it likes. Its on-air nastiness is almost a predictable knee-jerk reaction.

Some on the right go further. Author Ann Coulter compares the protesters to Nazis in another attempt to call attention to her extreme views. The more outrageous she is, the more attention she gets.

Jon Stewart’s Daily Show has had a field day lampooning the critics who called the marchers “muddled” because they have outlined no programme for fixing Wall Street. He showed news clips on how Congress and the government had been unable, or perhaps unwilling, to make reforms.

Actually, many sympathetic economists are being consulted by the activists for suggestions about what the demands should be. There are three groups; one proposes a detailed agenda, while others boil it down to a few message points. Still others feel the time is not right and that the focus should now be on building the movement first.

Similar protests are spreading to as many as 70 cities. They have ignited a spirit if resistance often citing Tahrir Square in Cairo as their model. Many observers don’t remember that that occupation was years in the making.

Perhaps that’s why so many global media outlets are also camping out in the park too, and, it seems, interviewing anyone that moves (there are also activists from many countries taking part).

China’s Xinhua News Agency that has just taken out a billboard in Times Square and opened a fancy bureau, caught up with me for an explanation for their global audience:

“I think this is speaking for the tremendous frustration that so many people have,” Schechter said, “With the growing economic crisis around the world, and even a new recession or depression threatening, people identified Wall Street as responsible for it. So this is the way they try to target people who created the crisis.”

(I was surprised that, in his press conference, Thursday, President Obama echoed my words of a day earlier, saying: “I think people are frustrated and the protesters are giving voice to a more broad-based frustration about how our financial system works.”)

In the spirit of new media, everyone can become a journalist or be pressed into action as a pundit (next, I answered questions in fractured Spanish for a Latin American media outlet). The men and women of Wall Street have been silent although one prominent executive was quoted expressing fears about his personal safety. I can’t imagine that the firms who spend millions on advertising their brands can be happy with all this anti-capitalism in the air.

So what now? Occupy Wall Street will soon face what Napoleon faced at the gates of Moscow.

The New York cold is not as bad as a Russian winter but it will test the occupation, if the Mayor and the police allow it to go on. The park’s owner is reportedly going to Court to evict them, no doubt the bidding of the city fathers. When demonisation doesn’t work, authorities invariably resort to criminalisaton.

Paranoia is growing in some circles, too, with fears that the Democrats may try to co-opt the movement.

One journalist wrote, “Wall Street and hedge fund tycoon George Soros sent a signal to his minions and infiltrators when he stated that he sympathised with the Occupy Wall Street movement. Soros’s statement dovetailed with David Plouffe, President Obama’s Senior Adviser, making contact with certain newly-minted ‘leaders’ of the ‘Occupy’ movement across the United States to ensure that they are as politically-manipulated by the White House as a vast majority of ‘Tea Party’ members have been manipulated by senior Republican Party officials and the billionaire Koch Brothers.”

This “divide and conquer” fear seems wildly exaggerated given the bottom-up democratic sensibility of the activists, but what’s a protest these days without a conspiracy theory to question it, whether or not the facts get in the way. 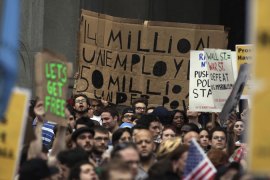 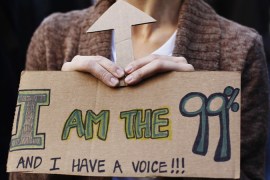 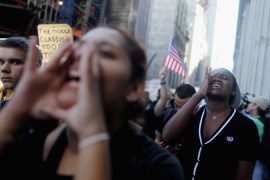 What chance a general strike in Manhattan?

If the Occupy Wall Street protests included labour strikes, they would have the power to inflict heavy economic losses.