Walid Jumblatt, the leader of Lebanon’s 300,000-strong Druze community, has thrown his weight behind Hezbollah and Syria in the political showdown with the US-backed March 14 alliance that is brewing in Beirut.

Jumblatt leads a bloc of 11 parliamentarians and his support could now give Hezbollah and its allies a veto over who becomes the country’s next prime minister. It is bitter blow to Saad Hariri, the caretaker prime minister, as he tries to secure enough votes to form a new government.

But even more significantly, Jumblatt’s declared rejection of the UN-backed tribunal investigating the assassination of Rafiq al-Hariri, the former Lebanese prime minister and father of Saad Hariri, has permanently sealed his break with the March 14 coalition.

This signals a return to his pre-2005 politics, when he viewed Hezbollah as a legitimate resistance movement against Israel, and officially brings his flirtation with pro-Western positions – which contradict his family’s long history of alliances with the left and pan-Arab nationalists – to an end.

Jumblatt is known for vacillating between positions, but yesterday’s announcement places him firmly in the Lebanese opposition camp and indicates a complete reversal from the strident anti-Syrian declarations that have marked his rhetoric in recent years.

A heavy legacy to carry

In 2005, immediately after the assassination of Rafiq al-Hariri, Jumblatt sent shock waves across Lebanon and the Arab world by suggesting that the US army should expand its invasion of Iraq by marching into Syria.

He also accused Damascus of being behind the 1977 assassination of his father, Kamal Jumblatt – expressing for the first time what many knew he privately suspected – and turned against his Syrian backers with the kind of vitriolic rhetoric that outdid even Damascus’ traditional enemies.

Jumblatt’s post-2005 position diverged sharply from the tradition of his family. Kamal Jumblatt was an icon of pan-Arabist struggle against Western intervention, while Walid’s maternal grandfather, Prince Shakib Arslan, advocated Islam as a unifier of Arabs from Morocco to Baghdad.

Those who know or have spent any time with Walid Jumblatt would be aware that he remains extremely proud of and deeply affected by his family’s legacy.

At one meeting I had with him, he presented me with a book and, in an earnest, almost emotional, tone, asked me to read his maternal grandfather’s memoir so that I might understand the depth of his family’s commitment to Arab independence and to Palestine.

But the flamboyant Jumblatt was not like his father or grandfather: As a young man he was better known for his love of motorbikes and signature black leather jackets than for his commitment to philosophical writings or political mobilisation.

Even after he succeeded his father as leader of the Druze community and the Progressive Socialist Party (PSP) in 1977, the younger Jumblatt did not change his carefree lifestyle and rather impulsive press statements.

In the throes of the Lebanese civil war, Jumblatt’s political statements made headlines, but it was his personal adventures that were a favourite topic for gossip columns in newspapers from Beirut to Rome and numerous places beyond.

Initially, and for more than three decades, he did not deviate from his father’s line. He remained allied with pan-Arabist and leftist parties, as well as with the Palestine Liberation Organization (PLO) in Lebanon, and pursued a decidedly anti-Israeli and anti-American position.

He opposed the US-led wars against Iraq in 1991 and 2003 and supported the military resistance against the US army, considering “killing the [US] soldiers in Iraq legitimate and obligatory” and declaring his wish that an attack that had targeted Paul Wolfowitz, the then US deputy defence secretary, had been more successful.

Jumblatt appeared less cautious than other politicians about carefully weighing his words.

But his striking shift from being a supporter of Lebanese, Palestinian and Iraqi resistance against Israeli and American troops to taking a staunch pro-Western stand, while seemingly shocking, was not really all that surprising.

Jumblatt has always been prone to changing positions – so much so that even those around him are wary of being immediately taken in by one of his statements in case he should alter it the very next time he opens his mouth in public.

But what appears to be an “opportunistic” attitude is not simply a product of his colourful and explosive personality. According to those who have known him for decades, Jumblatt is haunted by his responsibility to guarantee the security of the Druze community, not only in Lebanon but across the Arab world. For Jumblatt, just like his father before him, is looked at for guidance and leadership by Druze communities from Palestine, through Jordan and Syria, to Lebanon.

His shift to an anti-Syrian stance in 2005, therefore, risked endangering the unity and safety of the Druze community, but strangely – and this says a lot about the Druze – his political dances have not cost him his status as the Arab world’s pre-eminent Druze leader.

Although Kamal Jumblatt was largely viewed as a principled leader, he was able to successfully advocate socialism and maintain good ties with some pro-Western Arab leaders, particularly the late King Hussein of Jordan – driven in part by his concern to preserve the well-being of the Druze community.

But ultimately Kamal viewed pan-Arabism and the political integration of the Druze into social movements as the key to securing the future and safety of the community. A philosopher who was dedicated to exploring the spiritual meaning of life, he was as much respected for his teachings as for his political leadership.

In 1947, influenced by Western philosophies and political thought, Kamal established the Socialist Progressive Party (PSP), which declared itself dedicated to combating sectarianism in Lebanese politics.

During the 1950s, the PSP played a decisive role in thwarting Lebanon’s entry into the pro-American Baghdad security pact, supported Egypt during the attack on the Suez Canal and took part in the revolt against the US-backed Lebanese president, Camille Chamoun.

In the mid-1970s, during the devastating Lebanese civil war, the PSP joined a coalition of leftists, pan-Arab nationalists and the PLO against the pro-Western Maronite Phalange party. The ensuing alliance, led by Jumblatt, successfully took around 70 per cent of Lebanon before the Syrian army invaded the country in order to preserve its sectarian power-sharing system.

Shortly after the Syrian invasion, Kamal Jumblatt was assassinated – leading many to believe that Damascus was behind the killing and sought to weaken the Lebanese nationalist movement, as the coalition of pan-Arabist parties and the PLO was known.

At just 27 years of age and with little experience, Walid took over the leadership of the Druze community and the PSP.

Suspicion over Syria’s role in his father’s death did not stop him from emerging as one of the closest allies of Hafez al-Assad, the then Syrian president.

He also continued his family’s tradition of strong support for the PLO. Even at the height of Damascus’ campaign against Yasser Arafat, Walid Jumblatt stood firm in his support of the PLO leader.

In his public statements and private comments, he displayed a commitment to the Palestinian cause and people.

So when, after Rafiq al-Hariri’s assassination, he went from sounding like a revolutionary leader to more closely resembling a neoconservative mouthpiece, he turned the Lebanese political map upside down.

But a close observation of his statements during that period suggest that the man, like many others in the Arab world, was saddened and almost defeated by the decisive US victory in Iraq.

His public frustration with the Arab order and its defeats was aggravated by the assassination of al-Hariri – an event that must have brought his growing resentment – along with that felt by many Lebanese – towards the stifling Syrian presence in the country to a head.

His obvious anger after the Iraq war was transformed into a near total embrace of the new US order, as he suggested that the war he had initially opposed may become a catalyst for democracy in the Arab world.

But as it became clear that democracy was not rising from the ashes of destruction and, more importantly, that the US was inching towards engagement with Syria – and even recognising Damascus’ role in Lebanon – the maverick politician began to shift again.

Jumblatt edged cautiously towards Hezbollah during the May 2009 elections, but even after “publicly repenting” for his pro-Western stand, he did not break with his March 14 allies.

He publicly apologised for describing Bashar al-Assad, the Syrian president, as “half human, half ape” and was eventually received in Damascus, thus restoring his past alliance with Syria.

When he publicly took his son and successor, Taymour, to visit Hassan Nasrallah, the Hezbollah leader, the move was widely interpreted as aligning his party and community with the group.

He continued, however, in his efforts to play the role of unifier. But in a country growing increasingly polarised over the special tribunal, and the almost certain accusation of Hezbollah involvement in the assassination, that role proved impossible to sustain.

Jumblatt tried until the last minute to reconcile his rejection of the tribunal and his role as mediator in order to avoid bringing the Druze community into a political, and possibly military, confrontation.

But the failure of Arab mediation to bridge the gaps and find a compromise that could shelter the country from civil strife, left Jumblatt with little choice.

Appearing weary, he finally announced his decision: He is staying true to his father’s legacy and placing himself firmly behind Arab unity rather than an alliance with the West. 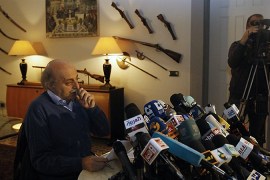 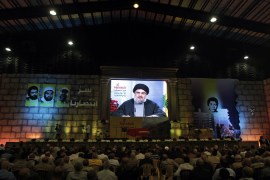 Hassan Nasrallah speaks for the first time since his party’s ministers quit the Lebanese government. 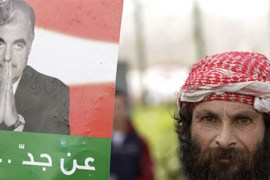 Lebanese alliance once united by opposition to Syria is now facing a new political reality.