In January 2005, Judy Sgro, the then Canadian immigration minister, resigned from the short-lived Paul Martin government after she was accused of corralling Harjit Singh, a refugee applicant, into offering her re-election campaign free pizzas and garlic bread. At the time, much of the country believed Singh, who later retracted his allegation.

But when, five years later, in August 2010, a boatload of Tamil refugees landed off British Colombia, the majority of Canadians wanted them sent back to wherever they came from.

So, have Canadians lost their traditional sense of empathy with the stranger at the gates or has the tide turned so much that they disbelieve every prospective immigrant and refugee?

Sgro’s successor, Jason Kenney, has just concluded a trans-continental journey to Europe, Asia and Australia, with immigration “fraud” the leitmotif of his trip. First, he persuaded Western European nations to ask tougher questions of “refugee” applicants and to crack down on human smuggling networks. Then, he corralled India, China and the Philippines – Canada’s largest immigrant source nations – to agree with Canada that their citizens were being shortchanged by dubious immigration consultants. Finally, he stopped in Australia to learn from the way Canberra has dealt with its recent Tamil “boat people”.

No other Canadian immigration minister has attempted anything even half as ambitious. The words “fraud”, “gaming the system” and “milking Canadians” have become so much a part of the national conversation that the Conservative government has made it a major theme of its autumn parliamentary strategy.

Rather than see corruption as endemic to the countries from which Canada draws most of its immigrants and accept it as part of the reason why many leave those countries, Kenney has homed in on consultants who help clients to lie, cheat, produce bogus documents and stage fake marriages in support of their immigration applications. He has called this a “developing industry” that Canada must confront head on through a Cracking Down on Crooked Consultants Act.

The stakes are undeniably high. When I immigrated to Canada in 2002, I paid a lawyer $2,000 for his services. The same lawyer recently quoted $4,000 for the very same services. Citizenship and Immigration Canada (CIC) estimates that some Indians are prepared to pay between about $11,500 and $14,500 to secure a Canadian visa. Earlier this year, the Indian press reported that a man was jailed for selling his family’s Canadian visas for approximately $7,200. In Beijing, Kenney said that some Chinese were willing to pay human smugglers up to $60,000 to gain access to Canadian soil.

As Canada tightens its criteria and places a reverse onus on applicants, the asking price goes up exponentially. But emigrant dreams are undiminished and a recent Gallup global survey has revealed that Canada remains one of the most favoured destinations.

Kenney’s overseas mission came at a time of hardening opinions in Canada over immigration. A survey released during his trip revealed that 46 per cent of Canadians believe newcomers are having a negative impact on the country, while just 34 per cent see positive benefits. In the last year, negative attitudes have hardened by five per cent, but the trend is even more dramatic when seen over a longer period of time.

Just two years ago, Mel Hurtig, who is often described as Canada’s best-known economic nationalist, wrote that “compared to most other Western countries, the anti-immigrant sentiment in Canada is much smaller”. Citing public opinion polls, Hurtig estimated support for robust immigration levels to be at 80 per cent, compared to just 52 per cent in Australia. He pointed out that the Martin government had fought the 2005 federal elections on a plank calling for more immigrants, not less.

Tough economic times and a rising fear of the foreigner since 9/11 only partly explain the hardening attitudes in traditionally immigrant-friendly Canada. The arrival of the Tamils appears to have spurred a backlash not just against them, but against all new immigrants. Although Sri Lankan Tamils have established a presence in Canada – the largest diaspora outside their home nation – they have been a lightning rod for the Canadian government ever since the Conservatives took power in 2007. The new Harper government quickly outlawed the Tamil Tigers as an organisation and when thousands of Tamils congregated on Ottawa’s Parliament Hill in the spring of 2009 to protest against the Sri Lankan government’s military crackdown on their kin, they were shunned by the entire political class.

Two other recent events have contributed to an overarching scepticism about immigration. Last February, Canadians were stunned to learn that 300 applicants for citizenship had used the physical address of a socio-cultural organisation called Palestine House in Mississauga to show residency. All of the applications had been submitted by an immigration agent, who at some point had been a member of the Canadian Society of Immigration Consultants (CSIC).

The last contributing factor is related to the CSIC’s fall from grace. Set up in 2004 as a way to self-regulate the Wild West-like immigration business, the society has been an abject failure. In the eyes of the government and many Canadians, immigration consultants continue to give Canada a bad name by facilitating the arrival of people who have embellished their credentials, marital status, financial standing and been deceitful about virtually every aspect of their applications. It matters because they are, after all, future citizens of Canada.

The Harper government has adopted a take-no-prisoners approach to the nearly 500 Tamils now detained in British Colombia awaiting refugee hearings, calling them “queue jumpers” and foreshadowing a series of measures intended to ward off any more sea-faring refugees. Official musings have included such draconian responses as high-sea interceptions and “offshoring” the processing of future boat people.

International experts such as Gordon Weiss, a former senior UN official in Sri Lanka, see close parallels between Australia’s approach over the last two years and Canada’s current line. “Sri Lankan officials and self-proclaimed experts played the understandable worries of Australians like a fiddle as boats neared their shores …. As for whether the families who arrived in Canada … were products of a smuggling racket or have jumped a queue, the Canadian interest is to keep an open mind, and to resist a vital debate being hijacked by foreign agendas,” Weiss wrote.

But far from having an open mind, most Canadians appear to be conflating refugees with all immigrants and becoming sceptical of their motives. Plus, as pollster Angus Reid said following the latest survey “there’s a belief that if not everyone here is employed, then we should not be taking jobs away through immigration”.

As my friendly neighbour Anne told me soon after the boat arrived with its bellyful of refugees: “We can do without these extra mouths to feed.” Canada’s historic sense of generosity and compassion appears to be wearing thin.

George Abraham is contributing editor of Diplomat and International Canada. 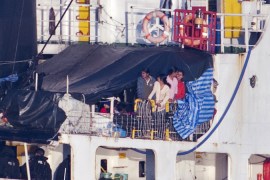 A hardening of the Canadian heart 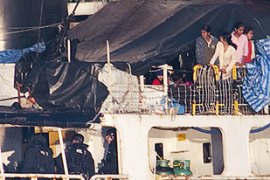