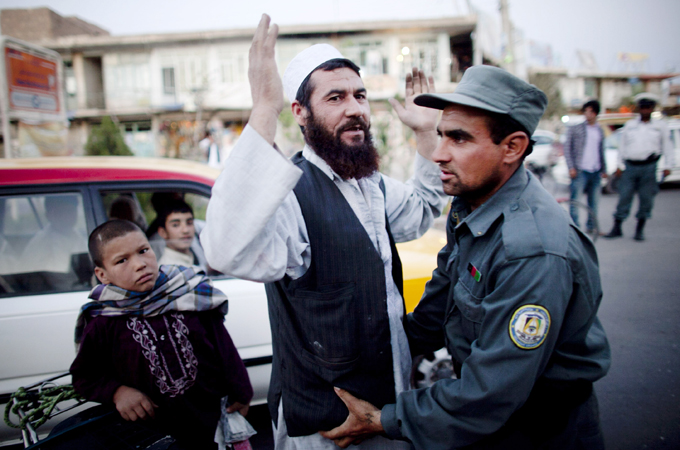 Security concerns may well overshadow the electoral process, however with nationwide political awareness on the increase Afghans are determined to participate [Getty]

Afghans who go to the polls on Saturday to choose candidates for the lower house of the parliament will confront a staggering array of challenges.  They risk violence at the hands of Taliban insurgents calling for a boycott.

As if this were not discouraging enough, officials of the Karzai administration, together with various strongmen, stand poised to steal – or buy – enough votes to guarantee that their favourites secure most of the 249 seats.  Moreover, of the 2500 candidates, a great number are tainted in the eyes of voters by accusations of corruption, nepotism, incompetence, and blood-soaked pasts.

Cynical voters can be forgiven for assuming that, based on the last elections in 2005, a seat in the Wolesi Jirga is an express ticket to a luxurious villa in Dubai.  Afghans are entitled to be sceptical, too, about the benefits of participating:  in the Afghan constitutional system, Karzai is king, and the parliament is mostly toothless.

Outside of the presidential entourage, the only sure winners are the Afghan (and Pakistani) printers who have produced the thousands of campaign posters that have littered the skylines of Afghan cities and towns and who have now also manufactured the fake voting cards inundating many provinces.

This election resembles a replay of Karzai’s fraud in the presidential contest of 2009.  For all of its seeming futility, however, this election may have more momentous consequences.

Violence, whether committed by insurgents or other parties, and accusations of vote rigging will further delegitimize Karzai.  The United States and NATO, focused on government corruption but hesitant to criticise Karzai too harshly, will surely play along, as they did last year during his re-election.

Yet there are broader implications that have not received the attention they deserve.  This summer’s electoral campaign has deepened the politicisation of Afghan society, which now expects a greater stake in its political future.  Part of a protracted process that began in 1978 under the communist regime, the elections of 2004, 2005, 2009, and now 2010 have drawn more and more Afghans into politics on the national level.

Patronage networks will account for many votes on Saturday, but, despite rampant insecurity (four candidates were murdered), many Afghan men and women actively campaigned, engaging a wider public in seeking support.  The explosion of new media, including television and the internet (some candidates even utilised Facebook), has knitted together an Afghan public in novel ways, integrating far-flung regions and connecting them to global circuits of ideas.

Thus events in Denmark (in the case of the cartoon controversy), Palestine, Iraq, Guantanamo, Florida and elsewhere have become integral facts of the Afghan political scene.  At the same time, dozens of international organizations and a mobile Afghan Diaspora, together with foreign military forces, have introduced new ways of talking about governance, development, gender, and ethnic relations.  Each of the country’s languages has been transformed by the appropriation of a new vocabulary that links Afghans not only to international patrons but also to global political conversations.

Events like a raid by NATO forces in Nangarhar in April have played out on a national stage, highlighting the vulnerability of all Afghans in the face of forces operating beyond their control.  According to NATO, soldiers killed an armed man who ignored orders to lower his weapon.  But local people claimed the residents were innocent civilians.  Hundreds of locals protested, shouting “Death to America.”

The Nangarhar tragedy resembles many others in that it appears to have been born of murky intelligence offered by someone seeking the assassination of a rival.  But one critical factor set it apart:  the home that was raided belonged to a female member of parliament, Safia Saddiqi, whose brother-in-law was killed.  Members of parliament tirelessly seized on the issue to condemn Karzai’s inability to protect Afghans, and a number of them demanded the public execution of the perpetrators.

Though constitutionally weak, the Wolesi Jirga has frequently served as a kind of megaphone for such oppositional ideas.  Many of them cohere around alarming stories about foreign plots:  the US is said to be ferrying Chechen fighters to the north, the Iranians are selling the organs of executed Afghan refugees, missionaries are spreading Christianity, spies are running for parliamentary seats, and Pakistan seeks, as ever, to control Afghanistan.

A recent report by the Washington-based Afghanistan Study Group triggered talk that foreigners intend to partition the country.  Fantastic though they may sound, such assertions, like Karzai’s jibes against the US and NATO and his recent move against foreign contractors, reflect a growing sense across this fractious political landscape that a crisis of national sovereignty lies at the heart of the Afghan impasse.  Meanwhile, the Taliban, too, have increasingly adopted nationalist rhetoric, positioning themselves as the true guardians of the country’s independence.

A negative outcome to this election will likely solidify the widespread perception that neither the Karzai government nor his foreign backers respect the will of the Afghan people.  A great number and variety of electoral constituencies will be alienated in the process.

The story here is not just of fraud but of the political exclusion of an increasingly politicised and nationalist public.  Foreign analysts are obsessed with mapping Afghan tribes and patronage networks, but ideas also matter in this society.  Seen in this wider context, demonstrations against the Florida pastor, like the many other recent demonstrations against the foreign presence, are not blind and irrational protests.  They should be seen instead as ground-level efforts to participate in – and reshape – national politics.

In failing to establish the necessary infrastructure, including real political parties, to conduct a proper election, the Karzai and Obama administrations have missed a critical opportunity to broaden popular participation in Afghan politics –  and to enhance their own standing.

A misguided faith in military solutions has led to neglect of the political sphere, and the US has largely ignored the transformation of Afghan society.  Ending the war will require far more serious efforts aimed at the political inclusion of an opposition whose ranks are very likely to expand as results of Saturday’s elections are made public.

Making sense of the tragedy in Mazar-i-Sharif