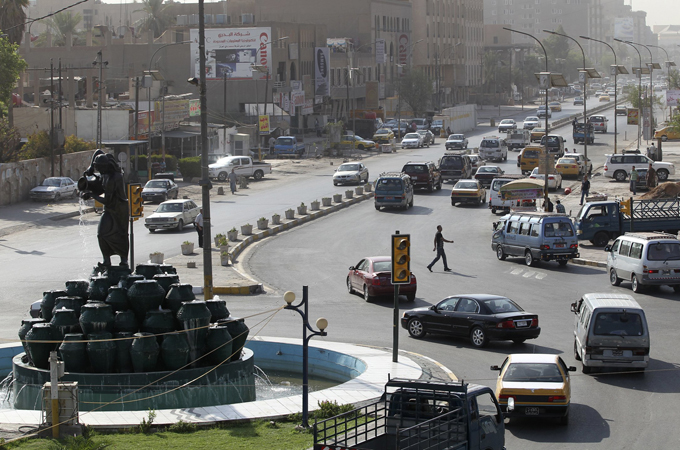 The US will retain a large presence in Iraq, but the extent of its influence is uncertain [Reuters]

When I left Iraq in late March 2004 the situation seemed quite grim.

The insurgency was beginning to show its full set of teeth, blowing up hotels, killing all manner of people, both Iraqis and foreigners. Kidnapping was one of the country’s few growth industries, there was barely any electricity, and huge convoys of US troops were a routine sight on the country’s main highways.

Six years later, and US troops by and large are now moving in the opposite direction, minus the billions of dollars in material and equipment that have been left, permanently it seems, implanted throughout the country in various US bases, along with 50,000 soldiers and an army of “private contractors”.

Winding down the war in Iraq and removing all troops from the country is considered the most important campaign promise Barack Obama, the US president, made. So actually, withdrawing troops on schedule would be a major accomplishment, perhaps the singular accomplishment, of his presidency thus far. But it should be noted that the schedule, and the reality underlying it, belong to President Bush, his predecessor, not Obama.

It was Bush who signed the memorandum of understanding that included the August 2011 timetable for withdrawing combat troops.

It was Bush who initiated the “surge” and, most important, it was the Bush Administration which set the conditions so that when it actually came time to “leave” Iraq, most Iraqis, however grudgingly, would opt to have some permanent US presence rather than be left completely to their own devices, with no one to referee and prevent a possible return to sectarian civil war.

And this is precisely where we are today.

Combat might officially be over for most US soldiers, but the US is not likely going anywhere anytime in the near future.

It was clear as I watched the huge convoys heading out into the desert six years ago that the US was there to stay. And today, listen to the words of Iraqi Lt Gen Babakir Zebari: “If I were asked about the withdrawal, I would say to politicians, the U.S. army must stay until the Iraqi army is fully ready in 2020.”

Ryan Crocker, the former US ambassador, revealed a core American reason, or excuse, depending on your point of view, for staying. “For a very long period of time, we’re going to be on the ground, even if it’s solely in support of its [Iraq’s] US weapons systems,” he said.

Similarly, retired General James Dubik points out that after the 2011 drawdown, Iraq will continue to rely on US help to modernise its military and train them to use all the very expensive weapons systems – M1 Abrams tanks, F-16s and the like – that Iraq is buying from the US with the its renewed oil revenues.

US oil companies may not have got all the spoils they’d hoped from the US takeover of Iraq, but the US defence industry has never had it better. And so while the government boasts of a full return to sovereignty, the US and its military will likely remain in Iraq with a fairly sizable force.

In fact, an international coalition, if you count the tens of thousands of foreign contractors who are indispensable to their presence, at least for the foreseeable future.

And if the presence has to change stripes, Dubik points out that a Nato-led (or at least style) peacekeeping force might be required to keep the peace in the troubled zones between Arab and Kurdish Iraq.

This along with at least 7,000 private security contractors working for the state department, and tens of thousands of American military contractors, and it’s clear that the US footprint isn’t going anywhere any time soon.

The real wild card here is Obama. Iraq was never his war the way Afghanistan has become.And there is good reason to believe he’d like to remove every last American soldier by 2012, as promised.But the military, to whom he’s been extremely deferential in almost every area, has little incentive to leave.

With Shia, Sunni and Kurdish leaders all having their own reasons for keeping an American presence around for the near future, coupled with billions of dollars of in arms sales, the strategic goal of using Iraq as a major forward operating base (with a desire to keep Iran in check), it’s not hard to imagine Obama finding some reason not to leave completely on schedule.

Three dynamics that are already swirling around the president, will likely determine which way he goes.

The first, obviously, is Afghanistan, which is going worse all the time.With revelations that the CIA is in fact paying the very Afghans that other arms of the US government are accusing of being masterminds of the country’s rampant corruption, and the Taliban able to engage in poison gas attacks against school children with impunity, there’s no telling how quickly or badly the country could spiral out of Obama’s control.

The worse Afghanistan gets, the more likely it is Obama will try more or less to pull completely out of Iraq by 2012.The second is the Israeli-Palestinian negotiations, which Obama seems poised to make a major issue in the coming year.

Sadly, the structure of the conflict, and of the power imbalances between the two sides, along with the continuing inability of the US to pressure Israel or bring Hamas into the negotiations will mean that negotiations will not advance towards the final status agreement the Administration is hoping to “bridge” in the coming month.

If Obama fails to shepherd an agreement while Afghanistan worsens this would give the insurgency a lot of incentive to ratchet up attacks in Iraq to force even more concessions from the state.

Finally, there is the increasing Islamophobia in the US, of which the controversy surrounding the building of the (non-)mosque near ground zero and the astonishingly high number of Americans who think Obama is Muslim and not even American by birth, are the greatest examples.

If the incendiary tactics of the Republicans by encouraging this discourse pay off in the November elections, there is little doubt that public antipathy towards Muslims and the Muslim world will grow even more in the coming year.

But this creates a wild card – if Republicans ride to victory on a wave of Anti-Islam rhetoric it could lead to even greater militarism in the region, forcing Obama to stay put and even increase the US footprint across the Middle East.

The rise of “know-nothing” politics could also inspire just the opposite, a renewed isolationism that leads the popular will to demand that the US “washes its hands” of a region believed to be unsalvageable and demand a quick exist from all of America’s entanglements there.

It’s impossible to predict which way things will flow, but one thing is clear, the fate of the American presence in Iraq, and of Iraq with it, is today in the hands of Afghans, Israelis, Palestinians and Americans, almost as much as it remains in the hands of Iraqis themselves.

Mark LeVine is a professor of history at UC Irvine and senior visiting researcher at the Center for Middle Eastern Studies at Lund University in Sweden. His most recent books are Heavy Metal Islam (Random House) and Impossible Peace: Israel/Palestine Since 1989 (Zed Books).