As a very frequent flyer, I have wanted to write about the abuses of the Transportation Security Agency (TSA) for years now. To tell the truth, since I am such a frequent flyer and often recognised by individual TSA employees, I was a little timid about this because I did not want flying to become an even bigger hassle and more invasive than it already is. But the recent brouhaha over the Chertoff-O-Scanners has given me the courage in numbers to be able to write about my experiences.

The first thing that bugs me is how complacent my fellow travellers are about the civil rights abuses we endure to be able to take the airplane seats we pay hundreds of dollars for. The second we click ‘purchase’ on the airline’s website, we are treated as though we are guilty just for wanting to go from point A to B by plane. This goes against our constitutional right of being presumed innocent until proven guilty.

Every time a TSA operative asks me if he or she can “take a look in my bag,” I say: “Sure, if you can show me a warrant.” I cannot say how many times a fellow traveller has proclaimed: “It’s for your own safety!”

Speaking of “it’s for your own safety”, who can forget Richard Reid, the “shoe bomber” who allegedly tried to detonate explosives on a flight from Paris to Miami in 2002? That incident is the reason why in the US we have to take our shoes off and put them through the x-ray machine. But did you know that the US is the only country that forces flyers to do this? Reid is a citizen of the UK and was flying from France, but if one flies in either of these countries, or anywhere else for that matter, it is not common practice to remove your shoes. So why are planes not dropping from the skies all over the world? Well, because this has nothing to do with our “safety”. Shoe removal and shoe throwing are the same act of disrespect and intimidation unless one is entering a Japanese home or walking on holy ground.

I think the next opportunity for abuse that came from on high to us already weary and grouchy flyers, was when some nebulous plot was discovered in the UK to blow up planes by carrying explosive liquids on board. We were never shown any hardcore proof that our shampoo would blow up an airplane if it was in a four ounce bottle, but that the offending liquid in a 3.5 ounce bottle, safely ensconced in a Ziploc bag, would be okay. I was actually on my way to the airport with a backpack full of naughty liquids when I heard about this one on the radio. I had to throw away about $80 worth of toiletries and make-up and wait in excessively long lines since the glorified minimum wage workers of the TSA were not too sure how to handle this latest threat to our “freedom and safety” – except, of course, to do what they always do and take away more of our freedoms to “protect” us from “threats”.

Shortly after the liquids scare, we could not even take liquids on airplanes that we had purchased after passing through security. There were huge bins at every gate to take away our coffee, water, lotions. I was sitting at the gate in one airport (I do not remember which one) drinking a cup of coffee when a TSA supervisor told me that I would have to finish the coffee before I boarded.

I responded: “Why? Can you show me the store where I can purchase bomb-making material past security?” He replied: “You never know ma’am.” And, me being me, I said: “Really? What kind of airport do you run where anyone can purchase explosives past security?” At which point, the big-TSA-man gave me a look that said: “Lady, you better shut up if you don’t want a body-cavity search.” The other passengers were giving me surreptitious thumbs’ up, but I do not think many people would go as far as I did in my conversation with the TSA-man, who looked very confused that someone was challenging him.

Even before the dreaded “underwear bomber” made all of this additional screening possible, I used to kid with the audiences that I spoke to that it was a good thing that the “shoe bomber” was not a “bra bomber,” as we ladies who wear those undergarments would then have to disrobe at the security line and put our brassieres through the x-ray machine. But my “joke” has now come into being in an even more horrid way than even I could have predicted. We do not have to take our underwear off to go through airport checkpoints, but, in many airports, we are forced to go through the Chertoff-O-Scanners which show a fully nude image to the TSA operatives and have been proven not to thwart the chemical agents that the “underwear bomber” hid in his Fruit-of-the-Looms.

Today I saw a CNN poll that said 58 per cent of Americans do not like the new procedure. However, in all of the corporate media discussions about the scanners, no one talks about how Michael Chertoff, the former national security advisor, represents a company called Rapiscan that is profiting from every machine that is installed in airports. There is even talk about Janet Napolitano, the secretary of homeland security, putting them in malls, schools, subways, train stations – and I am waiting to be told that we have to put a home version at our front doors.

I always refuse to go through the scanners and am then subjected to the “feel up”. We have heard that toddlers, elderly people and those with medical problems have been violated by the TSA voyeurs. Each fresh incident produces a brief flash of outrage, but many people do not even know about the scanner/feel up.

A couple of weeks ago, I was running very late for a flight that was leaving out of SFO, my home airport. I was literally running for my gate and dreading the dance that I do every time with the TSA there:

Me: “I refuse to go through that machine.”
TSA: “Why?”
Me: “It is my right to opt-out.”
TSA: “It is also our right to ask you why you are opting-out.”
Me: “Because it is a violation of my human dignity and civil rights and I don’t want you all to see me naked.”
TSA: “Female screening!” (As they yell for someone to come and grope me with gusto, and “someone” always happily obliges).

I do not like the groping any more than I like the molestation of the scanners – one feels dirty and violated and super-wary of future travel. However, the police state knows it has us over a barrel, so the least we can do is to protest loudly while it is happening.

Anyway, on this day, I noticed that the TSA was waving some passengers though the lane with the scanner and sending some through the normal metal detector. I was relieved to be waved through the lane without the scanner, but the woman behind me, upon noticing that her boyfriend was sent to the lane with the scanner, asked: “Why didn’t I have to go through that?” I told her: “You’re lucky, they can see you naked when you go through it.” Unbelievably, she responded: “Why didn’t they want to see me naked?” She was not kidding, but I just shook my head, gathered my stuff and ran to my gate.

The point to these stories is that we can only have our rights taken away from us with our consent. There is a famous Benjamin Franklin saying that was often quoted when Bush was president that rings ever truer during the Obama regime: “Those who would give up essential liberty to purchase a little temporary safety deserve neither liberty nor safety.” We are becoming a nation of lemmings running to the sea with the abandon of those that would rather plunge to our deaths than think for ourselves.

While I was writing this, the FBI “uncovered” another “terrorist” plot where a Somali-American allegedly tried to detonate a bomb at a “Christmas event” in Portland, Oregon. Mark my words, the monstrous state will either ban “Christmas events” or institute mandatory travelling Chertoff-O-Scanners to be able to put us into an even deeper state of fear. Where would a “terrorist plot” have the most devastating affect? I cannot think of a more fitting one than a “Christmas event” in very progressive Portland, Oregon.

Cindy Sheehan is the mother of Specialist Casey A. Sheehan, who was killed in Iraq on April 4, 2004. Since then, she has been an activist for peace and human rights. She has published five books, has her own Internet radio show, Cindy Sheehan’s Soapbox, and has been nominated for the Nobel Peace Prize. You can learn more about Cindy at Peace of the Action. 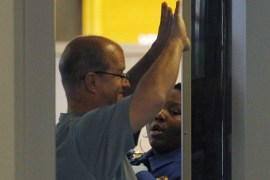 US airports brace for scan protests 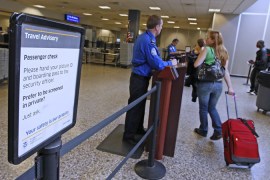 Uniformed staff of US carriers will be able to bypass heightened security measures brought in after attempted attacks. 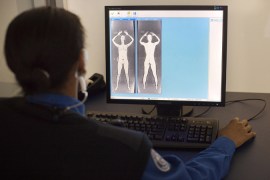