Movies tend to have similar scripts; there is a hero, a villain, comic relief, and a host of bit characters who flesh out the adventures of the main protagonists.

No one goes home after the movie and imagines being the bit character that got killed as collateral damage, the poor victim that needed to be saved by the hero, or even the jester who provides comic relief. And yet, over the course of the last twenty years, the Palestinian national movement as defined by the PLO has moved increasingly in the direction of becoming the bit character who watches the heroes and villains make history.

The inability of the United States to secure a settlement freeze, even with outrageous bribes that would have been more detrimental to Palestinian interests than the settlements themselves, provides Palestinians the opportunity to enter the stage as masters of their own fate once again.

Consider the current script: The United States and Israel meet repeatedly to negotiate what Israel should or should not do with occupied Palestinian and Syrian territory. They discuss what should happen with Iran.

They discuss how tight the siege on Gaza should be (very tight) and how tight the siege on the Palestinian cities in the West Bank should be (less tight so people can notice a difference).  And both caution Palestinians against pursuing any “unilateral” efforts such as attempting to challenge Israel’s violations of international law in legal forums, pursuing boycotts of Israeli settlement goods, demanding divestment from countries whose economic policies support the occupation, or engaging in non-violent (and very active) civil disobedience.

There is one thing however the Palestinians are told they can do – they can attend negotiations when the cameras are rolling in front of the world’s best hotels.

Most Palestinians obviously have rejected being limited to such a small role in a play that is, after all, about Palestinian freedom. Palestinian civil society is actively engaged around the world in the BDS movement (boycott, divestment, and sanctions).

Palestinians and justice activists around the world have challenged the siege on the Gaza Strip on land and by sea and some have given their lives to do so. Even while Palestinian firemen were helping Israel put out the tragic fire in the Carmel Mountains, Israeli soldiers were attacking non-violent demonstrators in the West Bank. Israelis who might be implicated in alleged war crimes now check with their lawyers before leaving the country.

The Palestinian national movement that used to exist as the PLO once upon a time claimed with much legitimacy to represent all Palestinians everywhere: in the Occupied Territory, in Israel, in the Arab countries and their refugee camps, and elsewhere in the Diaspora.

As a practical matter, all that was surrendered when the PLO signed the Oslo Accords. In exchange for playing a much smaller but more comfortable role in the theatrics of the “peace process” the PLO became the Palestinian Authority and went from representing all Palestinians to concentrating on those in the Occupied Territory.

But now Palestinian civil society, without the patronage ability of the PA and without the support of the US government, Arab governments, or even of European countries has assumed its own leadership role.

And the PLO is tentatively following. The PA (which exists only as long as the PLO continues to endorse it) has adopted the boycott of settlement goods and made it government policy. It has passed regulations requiring Palestinians to stop working in settlements. It has endorsed efforts to seek recognition of the 1967 borders as the official borders of Palestine. But these are still half-hearted steps.

The fundamental break will come when the PLO decides that the national movement (including the range of Palestinian political trends and constituent organisations) has to be recreated and must assume its role in coordinating and leading efforts around the world to ensure Palestinian freedom.  Times have changed and Palestinian agency in history will not necessarily cast Palestinians as the villains in their own story (at least as was the case in Western countries).

The Arab states used to argue for Israel’s destruction in blood curdling rhetoric that is now replaced by their never ending entreaties for peace and the promise of full normalisation in exchange for Palestinian freedom.  Muslim-majority states in the Organisation of Islamic Conference have endorsed the Arab Peace Initiative.

The context of Palestinian resistance has already been defined by those Palestinians around the world who have re-created the most internationally acceptable, successful, and morally uplifting forms of resistance to oppression and injustice.

Indeed, even the President of the United States in his Cairo address last year encouraged Palestinians to follow the model of the anti-apartheid struggle in South Africa and the civil rights movement in the United States.

The irony is that as the PLO and PA became greater appendages of the occupation, their ability to end it decreased with every day. Freed from the occupation, mentally, financially, and organisationally, the Palestinians create their own capacity to provide for their own freedom and, incidentally, for the security of the region.

This may be a defining moment for Palestinians. Rather than wait to hear what the next stage in Israeli-US negotiations may herald for Palestinians, it is time for the PLO to provide its own script.

This article first appeared in the online publication the Palestine Note. 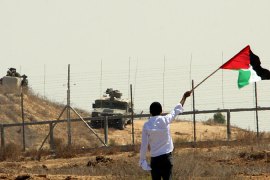 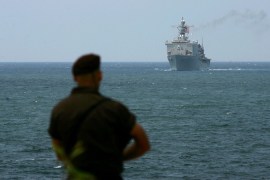 If the Obama administration wants to advance peace, it should attach strict conditions on aid to Israel.