Since being the defendant in about six trials after I was arrested for protesting the Iraq and Afghanistan occupations, it’s my experience that the police lie. Period.

However the lies don’t stop at street law enforcement level. From lies about WMD and connections to “al Qaeda,” almost every institution of so-called authority – the Pentagon, State Department, CIA, FBI, all the way up to the Oval Office and back down – lie. Not white lies, but big, Mother of all BS (MOAB) lies that lead to the destruction of innocent lives. I.F Stone was most definitely on the ball when he proclaimed, “Governments lie”.

Having clarified that, I would now like to examine a case that should be enshrined in the travesty of the US Justice Hall of Shame.

In February of this year, Aafia Siddiqui, a Pakistani mother of three, was convicted in US Federal (kangaroo) Court of seven counts, including two counts of “attempted murder of an American.” On September 23, Judge Berman, who displayed an open bias against Dr. Siddiqui, sentenced her to 86 years in prison.

The tapestry of lies about Dr. Siddiqui – a cognitive neuroscientist, schooled at MIT and Brandeis – was woven during the Bush regime but fully maintained during her trial and sentencing this year by the Obama (in)Justice Department.

Before 9/11/2001, Aafia lived in Massachusetts with her husband, also a Pakistani citizen, and their two children. According to all reports, she was a quietly pious Muslim (which is still not a crime here in the States), who hosted play dates for her children. She was a good student who studied hard and maintained an exemplary record, causing little harm to anything, let alone anyone.

After 9/11, when she was pregnant with her third child, she encouraged her husband to move back to Pakistan to avoid the backlash against her Muslim children – which was a very prescient thing to do considering the Islamophobia that has only increased in this country since then.

Following the move to Pakistan, Dr. Siddiqui and her husband divorced. Her life took a horrendous turn justly after. While Khalid Sheikh Mohammed (KSM) – supposed mastermind of the 9/11 plot – was being water-boarded by the CIA 183 times in one month, he gave Dr. Siddiqui up as a member of al-Qaeda. Was this a case of stolen identity, or was Mohammed just saying random words like you or I would to stop the torture?

There is some disputed “intelligence” that Aafia had married KSM’s nephew, a tenuous allegation at best, and even so, guilt by association has no place in the hallowed US legal system.

Following KSM’s torture-induced ‘insights’, Dr. Siddiqui was listed by Bush’s Justice Department as one of the seven most dangerous al-Qaeda operatives in the world. A mother of three equipped with a lethal ability to ‘thin-slice’ your cognitive personality in seconds. If alleged association and a healthy interest in neuro-psychology are the definitive hallmarks of a ‘terrorist operative,’ then Malcolm Gladwell better start making some phone calls to Crane, Poole and Schmidt.

A culture of falsehoods

Face it, we all know that since 9/11, there have been numerous false “terror” alerts and lies leading to the capture and torture of hundreds of innocent individuals – and the heinous treatment we have all witnessed to from Abu Ghraib. Additionally, we are supposed to believe that multi-war criminal, Colin Powell, was “fooled” by faulty intelligence so much so that he paved the way for the invasion of Iraq by his false testimony at the UN but we are also supposed to unquestioningly believe the US intelligence apparatus when they lie about others such as Dr. Siddiqui.

In any case, in a bizarre scenario – to make a very long story short – Dr. Siddiqui and her three children disappeared for five years from 2003 to 2008, resurfacing in Ghazni, Afghanistan with her oldest child, a son who was then 11. She claimed that for the years she was missing, she was being held in various Pakistani and US prisons being tortured and repeatedly raped. Many prisoners, including Yvonne Ridley, maintain she was incarcerated in Bagram AFB and tortured for at least part of the five missing years.

After Dr. Siddiqui resurfaced, she was arrested and taken to an Afghan police station where four Americans – two military and two FBI agents – rushed to “question” her through interpreters. The FBI and military, claim that they were taken to a room that had a curtain at one end and that they did not know that Dr. Siddiqui was lying asleep on a bed at the other side of the curtain. As you read below it will become blatantly obvious that personnel involved from both institutions totally fabricated their stories.

This is the Americans’ version: They entered the room and one of the military dudes said he laid his weapon down (remember, they were there to interrogate one of the top most dangerous people in the world), and Siddiqui got up, grabbed the weapon, yelling obscenities and that she wanted to “kill Americans.” All 5’3″ of her raised the weapon to fire and she fired the rifle twice, missing everyone in the small room – in fact she even missed the walls, floor and ceiling since no bullets from the rifle were ever recovered.

Then one of the Americans shot her twice in the stomach “in self-defence.” It was shown at the trial that her fingerprints were not even on the weapon. The only bullets that were found that day were in Dr. Aafia’s body. How many stories of military cover-ups have we heard about since 9/11? I can think of two right away without even trying hard: Pat Tillman and Jessica Lynch.

Dr. Aafia’s side is this: After she was arrested, she was again beaten and she fell asleep on a bed when she heard talking in the room she was in so she got out of the bed and someone shouted: “Oh no, she’s loose!” Then she was shot – when she was wavering in and out of consciousness, she heard someone else say: “We could lose our jobs over this.”

Even with no evidence that she fired any weapon, she was convicted (the jury found no pre-meditation) by a jury and sentenced to the aforementioned 86 years.  It’s interesting that the Feds did not pursue “terrorist” charges against Dr. Siddiqui because they were aware that the only evidence that existed was tortured out of KSM – so they literally ganged up on her to press the assault and attempted murder charges.

Even if Dr. Siddiqui did shoot at the Americans, reflect on this. Say this case was being tried in Pakistan under similar circumstances for an American woman named Dr. Betty Brown who was captured and repeatedly tortured and raped by the ISI – here in the states that woman would be a hero if she shot at her captors – not demonized and taken away from her life and her children.

I believe Dr. Aafia Siddiqui is a political prisoner and now the political bogey-woman for two US regimes.

In Pakistan, the response to her verdict and sentencing brought the predictable mass protests, burning of American flags and effigies of Obama and calls for Pakistan to repatriate Dr. Siddiqui. They know who the real criminals are and who should be in prison for life! At present, Hilary’s state department harps on about ‘soft power’ and diplomacy, but what better way to quell US distrust in the Muslim world than to try such cases with due diligence and integrity.

In the US, not many people know about this case. Obviously many people were Hope-notized by the millions of dollars poured into the Obama PR machine – and believed when he said that his administration would be more transparent and lawful than the outlaws of the Bush era.

I guess they were mistaken.

Cindy Sheehan is the mother of Specialist Casey A. Sheehan, who was killed in Iraq on April 4, 2004. Since then, she has been an activist for peace and human rights. She has published five books, has her own Internet radio show, Cindy Sheehan’s Soapbox, and has been nominated for the Nobel Peace Prize. Cindy lives in Oakland, CA, and loves to spend time with her three grand-babies. You can learn more about Cindy at Peace of the Action. 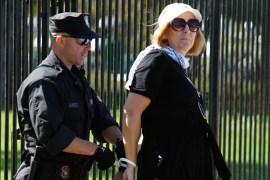 A letter from African intellectuals on the Sahel crisis